Kenneth Copeland - Love Created You to Be Blessed by God 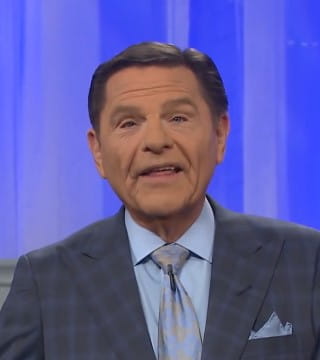 Hello, everybody. I'm Kenneth Copeland. This is the Believer's Voice of Victory broadcast.

Well, welcome again this evening. We're going to have a good time tonight. The gospel of John, Chapter 14, in this 21st verse, 14:21, my, you ought to have red box lines around it and something pointing at it from every direction. It is so marvelous, what he said. "He that hath my commandments, and keepeth them, he it is that loveth me: and he that loveth me shall be loved of my Father, and I will love him, and I will manifest myself to him". Wow. Listen to what He said, "I will manifest myself to him".

Now, He loves everybody the same. Far more than you and I can possibly conceive of His love and how much He loves and how much He cares. But He told us exactly what to do. Amen? Now, can you sense the time sense here? Let me show you what I'm talking about. "He that hath my commandments," He's talking about living in these commandments. He's not talking about, "Well, I'm going to keep one of them tomorrow". No. No, that's not this at all. He has My commandments and He does them. Amen. In other words, this is just a lifestyle. Well, what He is saying here, "I will manifest Myself to him on a continual, constant basis". In other words, "We'll walk in these things together. As He is, so are we in this world". Say it, "As He is, so are we in this world".

Now, I've noticed this, I've done this, and I've noticed other people doing it. "As He is, so are we in this world". Uh, can I argue here with you a little bit? "As He is". Amen. Walking with you? Working with you? What's He manifesting Himself to do here? He's manifesting Himself in these commandments building in you, building Himself in you. There is a reason for these commandments, very definite reason why God tells you to do anything, mainly because He wants you to do it. And His desire is in the blessing of the Lord. That's the way He started it. That's His eternal desire, is to manifest Himself in the blessing. Hallelujah. Thank You, Lord. We're working on something tonight. Praise God.

Let's go back to our golden text over in I John. In the 4th chapter, I John 4. And we've been reading and living with (now this will be the third week on the Believers' Voice of Victory Broadcast) on this 16th verse, I John 4:16. "We have known and believed the love that God hath to us. God is love, and he that dwelleth in love dwelleth in God, and God in him". "God is love". Now, let's go over to the book of Romans. I want to apply something here. Romans 13:9, "For this, Thou shalt not commit adultery, Thou shalt not kill, Thou shalt not steal, Thou shalt not bear false witness, Thou shalt not covet; and if there be any other commandment," any commandment. Amen. Anything He commands you to do. "If there be any other commandment, it is briefly comprehended in this saying, Thou shalt love thy neighbour as thyself. Love worketh no ill to his neighbour". Let me say it again. "Love worketh no ill to his neighbour".

Well, let me tell you something, neighbor. That applies to God first and foremost. He never works ill. He's never told you or me to do anything because He had something ill planned. No. Just the opposite. Prosperity is planned. Abundance is planned. When you're talking God, you're talking increase. Amen? Now, let's find out what God's like. Turn over the book of Genesis where we first get introduced to God. Verse 28. Let us read Verse 26. "And God said, Let us make man in our image, after our likeness". Now, the Hebrew text literally says, "Light be. Light was". I've not studied this to find this out. And the main reason is because I just really didn't want to know. But it never made much sense to me why the King James Bible says, "Let there be".

Doug, you ever heard anybody explain that? Do you have any idea what's behind that? I never have. Why would anybody say, "Let there be light," when He actually said, "Light be"? "Let it be"? I mean, who's He talking to? He's creating it. There's nobody that He's going to say, "Would you let that"? But because of this and because the English-speaking world is so used to that, that your ears don't really gather what's being said here. "Light be. Light was". Now, when you see something like this and you flow with it, Verse 24, "Let the earth bring forth". No, He didn't say that. He said, "Earth bring forth"! Amen.

If you do a study on it throughout the Scriptures, the word "be," the little word "b-e" is one of the most powerful words in the whole Bible. "So be it". That's strong. Amen? Instead of, "Let it be". Well, okay. "And God said, Let us make man in our image". It sounds like He just had, "Boy, have I got a good idea. Let's make us a man". Well, first let me introduce this to you. Back in the very first verse. "In the beginning God created the heaven and the earth". When you find a translation translating directly from Hebrew to English by Jews, it will say, "In the beginning, the Blessed One created the heaven and the earth".

Now, that tells you right there what God has called the force, the spiritual power that created all this, the blessing power of the Blessed One. If He is the Blessed One, then the only power coming from Him is the blessing. Now, this is just huge. This is page 1, you understand? This is important stuff here. All right. Now, then, "God formed man from the dust of the ground," the 7th verse of Chapter 2, "and breathed into his nostrils the breath of life; and man became a living soul". God formed the body of the man out of the dirt, with His hands. And I was praying and seeking the Lord about these things and had been for quite some time. And the Lord showed me something concerning breathing Spirit into him. And particularly the English Bible, you know, it's almost like He just took him and blows. You know, He's pumping him up. He's got this dead body, and so He's blowing it in his nose. Didn't happen quite like that. And one of the reasons people have struggled with that is because the same word "breath" is the same word "spirit". But God is a spirit. He's not a breath. He is a spirit, and He is love. Amen?

So here is this, like I said, I was praying, seeking the Lord and had been for quite some time about this. And He showed it to me. He had this physical body, lifeless, that was just hanging there like this, kind of light gray color. Wasn't any life in it. And He had it by the shoulders. And it was exactly the same size as He is. Well, of course. You think he'd be shorter? Ain't no way he's going to be taller. Amen. It was exactly the same size. And He had him by the shoulders. As He began to speak, He said, "Man be in our image, after our likeness. Have dominion over the fish of the sea, have dominion over the fowl of the air, have dominion over the cattle, over all the earth, and every creeping thing that creepeth upon the earth".

So God created man in His own image. He created everything else with His words. Why do you want to skip man? Huh-uh. Amen? Now, then what did He do? He re-created Himself. Now, this is important. Now, listen. Listen up. Adam didn't hear that. He wasn't alive yet. Selah. Let that soak into you a little bit. "And God blessed them, and said unto them". Now, here are the very first sounds that ever entered into the human ear, ever. The very first sound was not, "Thou shalt not steal". No. Amen. The blessing of the Lord was the first thing humanity ever had any concept of. It was the first thing they heard, it was the first thing that entered into his mind, it was the first thing, that very first thing. So that means it has priority with God. Amen. So look at it. Look at what it said. He "blessed them, and said, 'Be fruitful...'". He wasn't fruitful until God said that. "...multiply".

Now, of course, most people read that and they immediately think, "Well, yeah, boy, you're going to have to multiply. This is a big planet. Ain't nobody but the two of you". No, this is part of his character, which included human. But that's just his assignment, man. This is the power on him: "Multiply! Increase"! Increase! Hallelujah. Don't take you long to preach yourself happy when you get into this, you understand? "Replenish the earth". There again, that is not referring to people. You don't replenish something with people when there's not any people there. Like they were there and went somewhere? No. This is supply.

Now, I'll refer you to the scripture that says, "The whole creation is groaning". What is it groaning for? Manifestation of the sons of God. Why? The blessing is inborn. It is born into the born-again body of the living God. And in there is the blessing of the Lord, and in there is the replenishment of the creation the supply of this planet. Glory to God. You can't fix it with windmills. Amen. Hallelujah. Glory to God. "Replenish the earth, subdue it: have dominion over the fish of the sea, the fowl of the air, over every living thing that moveth upon the earth". "Have dominion over it". How? By blessing them. By blessing them. Love is doing the talking here. He's not talking about being mean to this creation, He's talking about loving it. Hallelujah. Amen.

Isn't this exciting? Now, what most people don't have any concept of is in doing this, He crowned him with His glory. And these two people had never seen, when they became aware and became a living spirit like God, one of the sage comments in the Chumash, "he became a speaking spirit like God". Amen. And because he has to be a speaking spirit is because words created and words are going to have to run the thing. Amen.

So, the glory of God, they were clothed from the inside out, just like God. When you look, it's not only "in His image," but "His likeness". And if you look at the Scriptures and find out the people that have actually seen God, they all say the same thing. He's a fire from the loins up, and there's lightning-like shafts of splendor coming out of Him. That's what they look like. And when they sinned, the light went out, and it scared them. They'd never seen themselves. Hallelujah. Mm. Praise God. Amen. Isn't that wonderful? Thank You, Lord. Thank You, Lord. The love of God created the heavens and the earth.