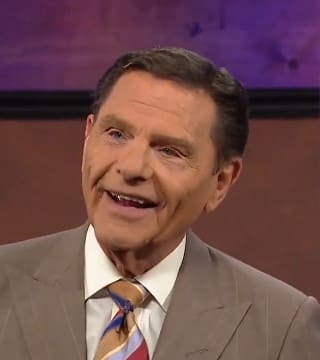 Hello, everybody. I'm Kenneth Copeland. This is the Believer's Voice of Victory broadcast. This night, you see, we got a head start on you, and so we're already pretty wound up in here tonight. Praise God. Amen. So let's have a word of prayer, and we'll get right into tonight's Bible lesson. Father, we thank You and we praise You and we worship You, and we come into Your presence with joyfulness and gladness of heart for the abundance of all things. And we open our hearts and we open our minds to You to receive revelation from heaven tonight. And we thank You for it, and we give all the praise and all the honor and all the glory to the wonderful name of Jesus. And it's in that name that we pray and believe we receive. Amen. Glory to God.

All right, let's open our Bibles tonight to Romans 4. Make note of this: All sin, all sickness, all poverty, all human suffering, all of it, is the result of satanic hatred for the human race. Let me say it to you again. All sin, all sickness, all disease, all natural disasters. See, none of that, there were no tornadoes. There were no hurricanes. There were no destructions of any kind until after sin came on the scene into the human family. There are no tornadoes in heaven. There is no sickness or disease in heaven. If God was going to put some sickness and disease on somebody, He'd have to steal it because He doesn't have any. Amen. And if it was His will for anybody to be sick, there'd be sickness in heaven. Amen. All sin, all sickness, all disease, all poverty, all human suffering is the result of satanic hatred for mankind.

Now, redemption is the result of the great love God has for all mankind, all people. "For God so loved the world that He gave His only begotten son". Who for? Whosoever. Amen. Oh, and we sing that old song, "Whosoever Means Me". Glory to God, yes, it does. I was part of that world, and it picked me up, glory to God, set my feet aright and changed me forever. Glory to God. His great love for all mankind, all human beings... hold your place there in Romans 4, and I want to look at the 10th chapter of John because we need to look at what Jesus said about this very thing. John 10:10, "The thief cometh not, but for to steal, and to kill, and to destroy: I am come that they might have life, and that they might have it more abundantly". Glory to God.

Now, if you're cleansed from all unrighteousness, what's left? Righteousness. Amen. Everything's going to be all right. Hallelujah. Amen. Now, once you confess it, don't bring it up anymore. "Yeah, but I still feel guilty about it". Well, that's your feelings. And if you've been allowing the devil to continue over that for any length of time, you're probably in the habit of feeling like that. Amen. But now that's done. That's finished. So don't fall for the feelings anymore. Put the feelings where they belong. Are they your feelings? They are too. They are your feelings. You don't belong to your feelings. Your feelings belong to you. You're the boss, not the feelings. Just shut up. Quit thinking like that. Stop thinking like that. Say that, "My mind is my mind. No devil, no person can make me think anything I don't want to think. I think the Word of God". Hallelujah. Glory to God.

He's talking about covenant promise, and He's talking about God being no respecter of persons. Our God's promise to you, God's promise to me is just as strong and just as powerful. God will answer it just as quick as He would Jesus. Just as quick as He did Abraham. Because of grace, because of grace, let's see, David, just sit it down there someplace. It'll be a little bit before we get to it. I appreciate it, sir. Thank you. Now, "It is of faith, so that it might be by grace". And grace is where everything is. Amen. Hallelujah. But, no faith, no grace. No grace, no Holy Ghost. No grace, no salvation. No grace, no money. No grace, no healing. It's all in the grace. Amen. Grace bought it and paid for it 2,000 years ago, and faith receives it. So, you begin there.

Now then, "Therefore it is of faith, that it might be by grace; to the end the promise might be sure to all the seed; not to that only which is of the law, but to that also which is of the faith of Abraham; who is the father of us all, (As it is written, I have made thee a father of many nations), before him whom he believed, even God, who quickeneth the dead, and calleth those things that be not as though they were". Now, I want you to notice the word "before," "before him". And if you have a cross-reference, you have a little number one there that says, "or like unto Him, before Him or like Him".

Now, if you've been religiously brainwashed instead of Bible taught, it disturbs some people because you and I try to act like God. Oh, yeah, I've had, you know, people say that. I'm thinking about a situation right now. There was a friend of mine, and they said, "You know, Brother So-and-so's ministry is just ruined". They said, "Why"? "Well, they got to running around with Copeland". "Well, I mean, what happened"? He said, "Well, both of them are just running all over the country trying to act like little Jesuses". Thank You! He noticed! That's exactly what I'm trying to do. See, Abraham, like God, in God's face, before Him, like Him, he called things that be not as though they were just like God. Amen. That's a very, very important observation.

Now, notice faith calls things that be not as though they were. "Who against hope believed in hope, that he might become the father of many nations, according to that which was spoken, So shall thy seed be". Now notice, "And being not weak in faith". So there is such a thing as weak faith. You remember Jesus said to some folks, "How is it that you have no faith"? And other people, He said, "My, my, I've not found such faith, not in all of Israel". It said, "He marveled at their faith". It said He also marveled at some folks' unbelief. Phew, if Jesus is going to marvel at me at all, I sure don't want it to be because of my unbelief. Do you? No, no, no, no. Glory to God. Well, we can be just as strong in faith as Abraham. Amen.

Now notice, "Being not weak in faith, he considered not his own body now dead, when he was about a hundred years old, neither yet the deadness of Sarah's womb". Now, here's the key issue of the whole thing. "He staggered not at the promise of God through unbelief; but was strong in faith, giving glory to God". Now, what gives glory to God? Being strong in faith. So, faith can be strengthened. Faith can be weak. Amen. So, strong faith, like God, calls things that be not as though they were. Now, how do you do that? You start off with the promise. You find the promise in the Word that covers your situation. And you don't just pick a little half a sentence out of something and try to twist it around to get it to say what you want it to. You can make the Bible say anything you want it to, you know, with enough manipulating around.

And, ha-ha-ha, you know, one scripture said, "Judas hung himself," another scripture said, "Thou should go and do likewise". Well, then, you know, that ain't going to work. I mean, come on. So I can take the Bible and prove you ought to hang yourself. No, no. When you're solidly on the mouth of two or three witnesses, Amen. And in my own life and Gloria, our lives and our faith life, we prefer them to be New Testament scriptures. Now, not always, but I like the New Testament, glory to God, because that's where we're living. Amen? And I'm solid on that ground, glory to God, then it belongs to me. It belongs to you. And it's blood-bought and blood-backed. I'm not going to stagger at that. I'm fully persuaded He's able to do what He promised. Amen. So I put it in my heart and I put it in my mouth. Praise God. I declare it's mine. And I call things that be not as though they were. Glory to God. Amen.

Now, had God said, "Ohh, hallelujah, the Spirit of God is moving. And I know I am fully persuaded that the Spirit of God is able to get rid of this darkness and bring light. I'm totally, completely persuaded that He can. And I'm totally persuaded that He will in His own good time. Whenever He's ready, I am ready. Glory to God". Folks, it would have still been dark. Nothing has been released that has in it the substance to change it. Well, yeah, but the Holy Ghost got power. Yeah, but He's moving around out there. He's still got it. He's moving. He's still got the power. It's got to be released somehow or another. Huh? I'm talking about the same Spirit that gave you life when you accepted Jesus, the same Holy Ghost that's living in you right now, same one. It ain't two, three Holy Ghosts. It's just the same one. Very same one. Hallelujah. And He's moving in you.

There may not be anything happening, but He's moving in you. And I guarantee you there ain't anything happening if you're saying, "In His own good time". Ha-ha. Baby, His good time came the day Jesus was raised from the dead. Now, He's been ready ever since. I mean, He's ready. What's He waiting on? The same thing He was waiting on out there that day, the Word of God. Hallelujah. Woo-hoo-hoo-hoo. Glory, glory, glory, glory, glory. Amen. Now then, that's the reason we begin then on faith, the Word, the blood that's behind the covenant of the Word, and the mighty name of Jesus. Somebody ought to just praise God right now. The Father, the Son, and the Holy Spirit are 100 percent for you, 100 percent on your and my side, 100 percent, with everything He has, everything God is, everything God owns, everything God ever will have belongs to you if Jesus is your Lord!