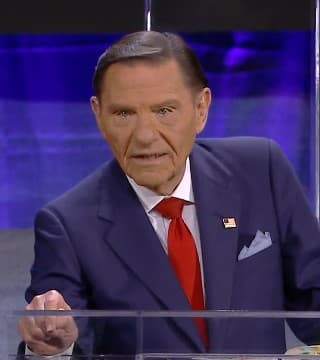 Now faith is... We can stop right there. Now faith is. Faith is NOW. Hope is in the future, but faith is now. So you begin to read, and oh my, all the way through this marvelous book. And I began to see, all through faith we understand that the world's refrained by the Word of God. And so now, through a spiritual law, faith is a spiritual law. What does that mean? It's predictable. It's predictable. There is something that sounds like faith, yet it isn't. It's what's called mental ascent. Oh yes I believe it, Glory to God, I have faith in God. Well, you are going to be healed tonight. Yes, I sure hope so.

Now, hope is important, but in that context, he might as well have said, "I sure wish it would". Hope is really important because it is the blueprint of faith. The apostle Paul used it. He said, "According to my earnest expectation and hope". Earnest expectation and hope. That's hope. Hope says, "Oh yes, oh yeah, you bet". Brother Hagin likened it to this, well, I'll just use... You know, my grandparents lived 300 miles away. My other grandparents lived out in California, so I didn't get to see them all that much, but they lived upon the planes there. My grandfather farmed huge, huge land up there. And three sections of land, that was a big farm. And it was huge for them to come to Abilene because, hey... I'd say, "Pop-Pop, please stay". I can't. I'd say, "Why"?

By faith, Abraham, when he was called to go out into a place which he should after receive for an inheritance obeyed. And he went out not knowing wither he went. By faith he sojourned in the land of promise, as in a strange country dwelling in tabernacles with Isaac, Jacob, heirs with him, the same promise. For he looked for a city that had a foundation whose builder and maker is God. Through faith also, Sarah herself received strength to conceive seed and was delivered of a child when she was past age because she judged him faithful who had promised. Therefore sprang there even of one, and him as good as dead.

So many as the stars of the sky in a multitude and as the sand, which is by the seashore innumerable. These all died in faith, not having received the promises, but having seen them afar off and were persuaded of them and embraced them and confessed that they were strangers and pilgrims in the earth. For they that say such things declare plainly that they seek a country, and truly, if they had been mindful of that country from whence they came out, they might have opportunity to have returned. But now they desire a better country, that is a heavenly wherefore God is not ashamed to be called their God, for he hath prepared for them a city.

By faith, Abraham... Now listen, get this one, this is 17. I mean, Hollywood got it all wrong. By faith, Abraham, when he was tried, offered up Isaac; and he that had received the promise offered up his only begotten son of whom it was said that, in Isaac, so shall thy seed be called. According that God was able to raise him up, even from the dead, and from whence he received him in a figure. He already had a vision of this. That's the reason he told his helpers, "The boy and I will be back". Now what was the reason for that? God knowing the time would come when he would be faced with offering up his only begotten son. And his only begotten son would say, "If there be any way, take this cup from me. Nevertheless, not my will but yours be done". When that day came, the Almighty loving God, to benefit you and me said, "My covenant brother was willing to offer up his only begotten son. And now I cannot. I am bound. I cannot but do the same".

I'm telling you people, blood covenants are the most powerful agreements on the face of the earth. Name changes all the way through it. The apostle Peter, his name was Simon Bar Jonah. Jesus renamed him. He writes his own letter as the apostle Peter. It was Peter, James, and John. Jesus changed his name. Amen. Covenants are so powerful. The 13th, 14th, 15th, 16th, 17th chapters of John are that final Passover meal. It changed heaven and earth forever. In that time, read that. Read it very carefully when you take communion. It was in an upper room. It was very dark, it wasn't a big table there. That was just an artist that made that up. And it was dark. If there was any table at all, it would be very, very low there, on the floor. They were seated on the floor. Very intimate time. He had to get Judas out of that room. He had to see to it that he was out of there. Get out.

Some of them thought for sure he had sent him out to give to the poor. You really have to have a strong giving reputation, but notice it, accounting as God was able to raise him up even from the dead. From hence also he received him in a figure. By faith, Isaac blessed Jacob and Esau concerning things to come. By faith, Jacob, when he was dying, blessed both the sons of Joseph and worshiped, leaning upon top of his staff. By faith, Joseph. By faith, Moses. Chapter 12, wherefore seeing when were encompassed about was so great, a cloud of witnesses, let us lay aside every weight in the sin which does so easily beset us. Let us run with patience the race that's set before us, looking unto Jesus the author and finisher of our faith. The author and developer. The developer of our faith.

So receive him as the developer of your faith. The finish man. Amen. You don't want just an ordinary carpenter doing the cabinets in your new house. There'd be big old half moon marks on that wood you can't get out. No, what do you have? The finish man. He's very delicate. He comes in and finishes. He develops it. Looking unto Jesus, the author and the finisher of our faith, who for the joy that was set before him endured the cross, despising the shame. Consider him that endured such contradiction of sinners against himself, lest you be worried and faint in your mind. Faith is now, it is a spiritual force, and you and I have the privilege of being a part of what he's doing today. He's the same. We'll look at it later.

This same Jesus, as he was going up, what was the last thing that he did according to Luke's gospel? He blessed them. He blessed the loaves and the fish and prayed. What do you think he said, "Well, God bless a little fish". No. You know what he said. Multiply. What was it in Genesis? Multiply. Multiply. The miracle happened in the hands of the disciples. He just gave them a little. And as they passed it out, he said, "You feed them," and they said, "What"? But he blessed it. He blessed it, called it to multiply, and as he handed it to them, it began to multiply. Praise God. Well, that's enough for tonight. Thank You, Lord Jesus. Praise You, Lord. Glory to God. Thank You, Lord Jesus. Let's praise him and worship him. Bless his name. Bless his name. Thank You, Lord.

Then, 17th chapter of Genesis, the blood of men through circumcision. For all of that, all the way, the first covenant into the second one, in order for the blood of the lamb, God's covenant sacrifice. So that you, so that I, and Christians all over this world have their sins remitted. Not covered, remitted. Wiped out by his blood. Would you stand with me, please? Anyone in the sound of my voice, any place here and wherever this is being heard in the world, if you have never made Jesus Christ the Lord of your life, you need to do it right now. The Bible says in 10th chapter of Romans, any man that believes Jesus Christ is raised from the dead, and confesses him as Lord, he shall be saved.

Well with the heart man believes unto righteousness, and with his mouth, confession is made unto salvation. And thus the way the laws of faith, you believe it and you say it. Listen to me, Jesus did all the hard part. He bled on that cross. He had been beat and whipped. Go to the 52nd chapter of Isaiah, he no longer looked human. He'd been beaten and slapped until he was so swollen. And they spit in his face. Different ones, they took him around to different places, then hung him on that cross. Read the 22nd Psalm, that's what it's all about. He went into hell and he paid the awesome, terrible, terrible price for our sins. But in doing so, he conquered death and he's no longer called the only begotten Son of God. He is now called the firstborn from the dead.

If you know anything about Jewish law, the firstborn always got the best of everything. Well, we have firstborn status. Glory to God. Yes. And you? What about you? If something were to happen to you right now, in a terrible, horrible situation that you just found yourself in, what would happen if suddenly you leave this body? The Bible says to be absent from the body is to be present with the Lord. Really? Not without Jesus. So just put your hand over your heart, indicating that you mean what you're praying, and pray this:

The Bible said, now you have been translated out of the kingdom of darkness into the Kingdom of God's dear Son, God's love Son. The word there is agape. The God kind of love. And now that's where you are. So grow in it, practice it, practice is precious. Think about it. Meditate on his Word. Thank You, Jesus.