Kenneth Copeland - God's Direction Is for Your Protection 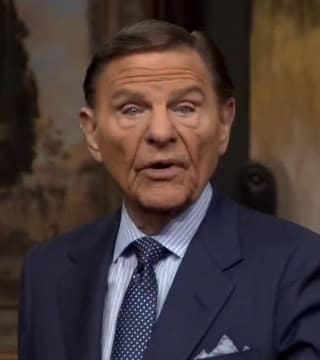 I want to go now to protection. Proverbs chapter three, the 11th and 12th verses, "My son despised not the chastening of the Lord. Neither be weary of his correction, for whom the Lord loves, He corrects. Even as a father, a father of the son in whom he delights". How do you spell disciple? Open your phone up to your dictionary and then look at it. Doesn't anybody in here know? What? D-I-S-C-I-P-L-E. Yeah. How do you spell discipline? It's exactly the same thing. Now in the 13th chapter of John, the night that changed heaven and earth. Jesus said in the 34th verse, "I give you a new commandment. that you love one another as I have loved you". "By this, all shall know that you are my disciples". They were not apostles. "That world will know that you're my disciples by the way you love one another".

My dad, one of my heroes. Oh, just, well he is. I mean, I get talking about him, I'm miss him. But he disciplined me. Oh, yeah. And I came around to his way of thinking, yeah. And I became his disciple, and I followed him just as close as I could. The way he did things and what he taught me. He taught me so many good things. I mean, just little things that this doesn't sound like a whole lot. But my dad loved to swim. I love to swim. I mean, I'd jump in a mud hole, man. I just would and sometimes even I turn in west Texas, you get a good rain, bar ditch would be running full of water. I'd say, "Daddy, stop the car. I want to jump in that bar ditch". He'd say, "Now, Kenneth, don't you go jumping off in there". He said, "Take it easy, now. You don't know what's under the water".

So I'd take it easy and slap around, down in that water. And little things. We went swimming together. I couldn't figure out how to dry my back. I still do it the same way. Take one corner of the towel, take the other corner. Yeah, you got it. There you got it. The little things that my dad taught me, I became his disciple. And he and I were just the best of friends. Oh, man. But he corrected me. And he directed me. And he protected me. He taught me to keep my mouth shut during a sale. He said, "Kenneth, Sampson killed 1000 men with a jawbone of a donkey. And 1000 times that many more sales have been killed by the same weapon". He was discipling me. Years later, I was flying. The only time I ever heard the audible voice of God, flying in late at night. And I heard this, "Coming to you from the Revival Capital of the World".

All right. Well, we got out there and it was an abandoned Naval air station, World War II. Well, when I got out there, I recognized it because I knew since I went to high school, I knew it was out there, but I didn't pay attention to it. And so, just a barbed wire fence around the thing. And now I'm talking about my dad discipling me. And so I held the fence up for Gloria to crawl through it, and I stepped over it. The moment both feet touched that, then I heard it in my spirit. This is the Revival Capital of the World, and you're going to build it. I thought, what with? So later, the Lord directed me to find out who owned it. There's a man by the name of Pewitt, an oil and gas business. He bought it out of the government, 1520 acres.

So, we went to see him. He's a bachelor, never had married, big supporter of SMU, strong Christian man. So the man that was with me, I said, "Now, just be quiet and I'll do the talking". I said, "Just be quiet". So we walked in there and walked in his house, his niece let us in. I walked in there. I said, "Mr. Pewitt, my name's Kenneth Copeland and the property out at Eagle Mountain". Now I prayed and found out what to say. I said, "The Lord has need of that property". He had a real tick tock clock, one of those old ones that you had to wind up. Man's worth $300 million, but you had to wind his clock up and he'd sit there in his chair and that clock. He said, "Well, it's for sale". Just sit there and sit there and sit there. You want to talk so bad. But I learned driving Oral Roberts to keep my mouth shut because Bob DeWeese threatened me if I didn't. Corrections.

I said, "Sir, there's another thing you don't know. I don't have any money". Sat there and sat there. "Well, you boys come back to see me". So we made an appointment and came back. I'm talking about the discipleship of my dad. To keep my mouth shut. So we went back at the appointed time. He said, "Well, I'm going to see you boys through this thing". I said, "Mr. Pewitt, another thing you all don't know. We don't borrow money. I don't think it's right to mortgage another man's property. And this property will belong to Jesus Christ", "Well, you boys come back to see me". Never smile. So we made an appointment, but this time he wanted to meet in a restaurant there in Glen Rose, Texas. And he wanted to bring somebody from the board. Well, a man that was on our board at that time was in the real estate business.

So I got a hold of him and he came. He said, "I'm going". He said, "You got anything against rent"? I said, "No, no". He said, "I'm going to divide it into four equal parts. Now, all your rent will go to the fourth part. And when you can pay for a quarter, I'll deed it to you. Now, no interest. And if God tells you to go somewhere else, all you need to do is give me two weeks notice". Well, we didn't. Of course, we're still there. But anyway, my dad, the apostle. So he turned around and he said, "Can you write that down just like I said it"? Barry said yes. And he said really, this regular typewriter, just another letter, piece of paper, typed it out just like he said. He said, "Does that seem satisfactory to you"? I said, "Yes, sir, it does".

So he handed it back to him and he said, "Now, write that same thing again. I want to be the first donor and take $1 million off of the price". He still hadn't smiled. So Barry was rewriting his thing and he said, "Now Portland Cement has been after me to sell them gravel off of this property. I told them they need to talk to you". He's already. I told him they need to talk to you. I said, "Well, you mean after I pay for it"? "No, no, son. Son, sell some gravel. I've given you the mineral rights". My dad trained me. And taught me. If he hadn't, I would not have been able to stand that driving for Oral Roberts.

I kept remembering what he said, "Keep your mouth shut". And we'd just be driving along and he'd put something up in front of his face. I don't think he's reading. He might have been, but just to keep his attention. We were in Oklahoma City. "Kenneth". Oh, I jumped. He said, "People will always tell you, you can't do it". But if you do these three things, you will be a success. Number one, find out the will of God. Number two, confer no longer with flesh and blood. Number three, get your job done at all cost. I couldn't wait to get somewhere to write it down. You find out the will of God first. You find and you seek. You seek God, not people.

Now, when the Lord directed me to go on daily, the first thing I did is call him and I said, and I told him what I thought. And he said, "Kenneth, let me tell you something about a daily". I thought, here it is. He said, "It is so daily". I know it. That's what he, and I didn't want to do it. I was his disciple. He disciplined me. He told me what worked and what didn't. And I followed it. And then, I became a disciple of Kenneth E. Hagin, and I learned the Word of Faith. Not just faith, first and watching Oral Roberts and watch him talk about faith and watch him work faith.

And it struck me, he uses his faith like a mechanic uses a tool. He uses it on purpose. It's not this sling shot, like you're just throwing mud at a wall and hope some of it sticks. And then I found out about, this is the Word of Faith, which we preach. That if anyone will say with his mouth, Jesus is Lord and believe that God has raised him from the dead, he shall be saved. For with the heart, man believes under righteousness and with the mouth, confession is made under salvation. Changed Gloria and my whole world. Praise God. Praise.

Shall we just praise and worship the Lord? Would you just stand with me and let's praise and bless his name? And thank You, Father. Thank You, Lord Jesus. Lord, we praise You and thank You tonight for the Word of the living God. Father, thank You tonight. And anyone in the sound of my voice has never accepted Jesus as your Lord and Savior, this is your time. This is it. Don't turn him away. "Oh, but Brother Copeland, you don't know what I've done". No, but I know what Jesus did. And Jesus himself said, "Anyone that comes unto me, I will for no reason cast him out. No reason". I've preached in jails and prisons and lots of places. But Jesus said, "I was in prison and you visited me". Isn't that good? So right now, just pray this with me:

Oh, God in heaven. I believe with all my heart. That You raised Jesus from the dead. Come into my heart. Live on the inside of me. Be my Lord and Savior. I accept Your Word by faith. I believe it. I believe God raised You from the dead. I believe You are the Lord Christ. Fill me now. To overflowing. With Your precious Holy Spirit. Just like You did on the day of Pentecost. And I fully expect. To speak. In a language I've never learned. A prayer language. A praise language. That's beyond my understanding. I receive You, Jesus. You're a gift. For God so loved the world that he gave. His only begotten son. You're a gift to me. And the Holy Spirit is a gift to the church. I receive the gifts tonight.

So just take a deep breath and as you do, just know in yourself, I'm receiving the fullness of the Holy Spirit. Just praise him. Praise him in the spirit. The great Apostle Paul said, "What is it, then? I will pray with my understanding. I will pray with my spirit. I will sing with my understanding and I will pray with my spirit". And he said, "I speak in tongues more than you all". To the church at Corinth. Correction is a marvelous thing. It's a precious thing. Don't despise the correction and don't let the word chastisement throw you. That's just an old English word for discipline. But we're disciples. We're eager to learn. We're followers of the Lord, Jesus Christ. We are his disciples.