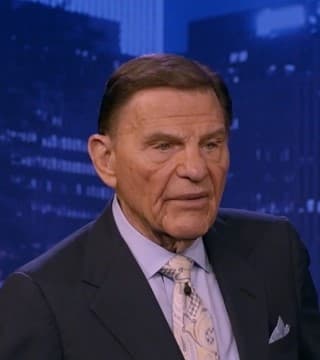 Let's go to the 17th chapter of John. John, the 17th chapter, and this is the prayer that Jesus prayed, and you need to pray this prayer along with Jesus all the way down through it. And you'll come to the 20th first, "Neither pray I for these alone, but for them also, which shall believe in me through their word". Well, that covered everybody in here. One way or another, we believed on him through the Word that these men wrote and their lives, particularly John and Peter. "That they all may be one, now, Father in me and I in thee, that they also may be one in us, that the world may believe that you've sent me, and the glory, which you gave me, I have given them that they may be one, even as we are one. I and them and thou in me that they may be made perfect in one, that the world may know that you sent me and have loved them just as much as you love me".

God loves you just as much as he loved Jesus. The first time I saw that, I mean, like I told you, I was scripturally illiterate. I read through that, but I didn't pay any attention to it. But I learned about the prayer of agreement. I thought, "I'm going to agree with every verse in this prayer". I got down to that glory verse and that kind of shook me a little bit, but it's written in red. So I said, "I agree," but then I got to that one and I said, "God loves me just as much as he love Jesus"? That frightened me. But I said I was going to agree with this. And I was walking around the little room there in Tulsa, in our little house we rented, and walking around that room, And I was going through that and my knees began to shake and I began to say it. I said, "I'm going to say it. God loves me as much as he loves Jesus".

Because of my religious thinking, I didn't know I was a new creature. I thought I was just an old sinner saved by grace. That's what I heard in the Baptist church. I was an old sinner, but then I got saved by grace, so I'm no longer an old sinner. But I didn't know that. So I said, "I'm going to say it anyway. It's written in red. I'm going to say it". And I just started walking around that room. God loves me just as much as he does Jesus. God loves me. God loves me. God. Yes, he does. Glory. And I'm telling you, my spirit rose up on the inside of me. I began to be bold. I said, "God loves Kenneth. God loves Kenneth Max Copeland. God loves Kenneth, glory to God. He loves me as much as he does Jesus. I am loved by God". It changed me forever and it began to be easy to receive from him because I found out he loved me. And then I got to thinking about it.

Well, of course. He sent Jesus to the cross to get me. He sent Jesus to the cross to get you. He loved you so much that it pleased him to bruise him. That only happened over a period of three days and nights, but it lasted forever. Glory to God. And we're nearing praying time now. Matthew 8:16, Matthew 12:15, Matthew 19:2, Mark 6:56, Luke 4:38-40, Luke 6:17-19, Luke 9:10-11, Jesus healed them all. He healed them all. How many all? All of them that would receive it. There was a lot of them that didn't get it until maybe even after he was raised from the dead. But at the time, they were just curious. But in the book of Luke, it said, "The multitudes came to hear and be healed". They wanted to hear him just as much as they wanted to be healed. Oh, wouldn't you like to hear him preach? We're going to get to one of these days, glory to God, hallelujah.

A woman that had spent some time in heaven, and I'm at the closing point here, had spent some time in heaven, and she said that she went into this huge, huge ballroom and sanctuary with this gorgeous, sparkling, white dome. And everybody's praising God and there'd been several speakers. But then she said, "All of a sudden, the Master walked out on the platform," and then she saw that the dome was made of angels. And when he stepped up, the angels just took flight. The ceiling flew away. How'd you like some of that?

Now, Gloria's little brother, her little brother Stanley, Stanley Neece, glory to God, what a man. He was a journeyman rock mason and our prayer cabin in Arkansas, he built the chimney. And I was watching him working on the top of it and he was standing there with Gloria's brother, Doug. He'd pick up those buckets of mud and walk up the ladder. Waist about that big around, and when he started up the ladder, his back muscles are doing this. I said, "Doug, I hope you've already got your licks in on your little brother". He said, "I'm not touching him". But his arms were big. He would not wear sleeves. You could buy him, well, in fact, we bought him a dress shirt one time, and first thing he did is cut the sleeves out and put his coat on. He would not wear sleeves. They were tough on his arms. Well, we got the news that he was asleep in a truck on the right side, and the young man that was driving the truck was driving way too fast. And I know right where that curve is. The curve goes this way, but the lean, it's an adverse lean curve, and he took it too fast, and that truck just ran out through the trees and burst into flames.

Do you know what that did for our family? Victory over death. Victory over death, glory to God forevermore. Are you ready to pray the prayer of faith? Glory to God. Stand on your feet with me. Hallelujah. Thank You, Lord Jesus. Now, plug in with your faith. It's just exactly like these lights. The power, if one of these lights go out, you don't call the power company. If you walk in here and it's dark, you don't call the power company, send us some light in here. Plug the thing in. Flip the switch. Brother Hagin used to say, "Keep the switch of faith turned on". plug in with your faith. Make an effort. Make an effort.

Now, he was born premature. To save his mother's life, they induced labor. They thought he was dead, but he wasn't. But he was so deformed, the doctor told him, he said, "We can't do it. But for you to live, you would have to have new lungs. You'd have to have all new plumbing. You'd have to have a new heart. Everything in your chest is so underdeveloped that you have to die". But he said, "In a moment's notice I was standing on my feet with my hands raised praising God". Now, and here's what he said. "You have to do what you can't do. You do it by faith". Amen. Praise God.

The gospel that I have heard, is the power of God unto my salvation. I confess Jesus Christ Lord over my life, over my spirit, over my soul, and over my body. I receive the power of God to make me sound whole, delivered, saved, healed. Now I act on the Word of God. I receive the power of God. Sickness, disease and pain, I resist you in the name of Jesus. Sickness, weakness and pain, you are not the will of God. I enforce the Word of God on you. I will not tolerate you in my life. Leave my presence. I will never allow you back. My days of sickness and disease are over. I am the saved. I am the healed. The power of sickness has forever been broken over my life. Jesus bore my sickness. He bore my weakness and pain. I am forever free. Sickness shall no longer lord it over me. Sin shall no longer lord it over me. Oh, glory, glory, glory, glory, glory. I have been redeemed from the curse of the law. I proclaim my freedom in Jesus' name. Today. Today. This day. The gospel is the power of God to me unto salvation. Glory to God. I receive the gospel. I act on the gospel. I am made whole in Jesus' name.