Joyce Meyer - It's Time to Flip Your Switch 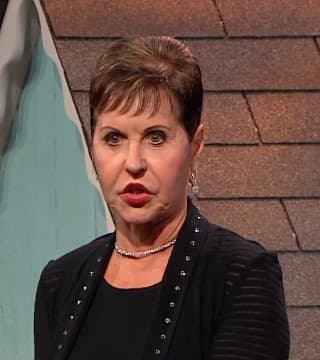 I'm gonna talk to you a fair amount tonight, part of the time at least, about this thing about excellence, because I'll tell you the truth, a lot of people don't even know what it is anymore. I mean, they really don't. It's kind of like, and I even kind of feel that just a little bit in here tonight. It's, like, do we even know what that means, to be excellent? It's not perfection. But it does mean that if you have a job, you're gonna do the best job that you can. And you have to decide this for you. For you. You have to decide it for you.

And you listen to God for you. And you do what you believe God is telling you to do. And you don't go get somebody else's permission and you don't let them pull you down and you don't let them water down your commitment, because when it all is over, you are gonna stand before God, and you are gonna answer for you, not somebody else. Now, they worked so hard making me this little prop, because I think that pictures say a lot to people. Isn't this a cute little house? Come on, give the guys a...

Now, you know what? So we're gonna pretend like this is you. This is a believer. Because the Bible says that we are the house of God, the home of God. So we're God's house, and if we're not born again, not saved, we haven't given our lives to Christ, then everything inside is dark. There's no light in there. You receive Christ, whoop. But here's what happens. How many of you remember when you first got saved? Oh my gosh, we were so excited. We weren't mad at anybody. We loved everything that moved. We had peace. It was the most wonderful thing in the world. But you know what our biggest problem? We get too used to it. We get too familiar with the things that God does for us, and then we need something else to excite us.

Several years back, I said, "You know, God, I don't understand why you don't do some of the things that you used to do when I first started walking with you". And man, he answered me right back in my spirit. He said, "I still do everything that I did then and more. You've just gotten used to it that it doesn't excite you anymore". See, we are so unbelievably amazingly blessed, but we just... Do you know what some people in the world would give...

Do you know how far they would walk to be in this building tonight, to get to do what we're doing here? I go to India and do this, and people would walk for 4 days and sleep on the ground for 3 nights just to be part of something like this. But man, we got it on every corner so, that doesn't mean we don't appreciate it, but we have to be careful that we don't just start taking the things that God has done for us for granted, because if we do, then here's what happens if you're not careful. Over a period of time, although you have the light of God in you, it starts to get dimmer, and dimmer, and dimmer, and dimmer, and dimmer, and dimmer, and dimmer. Pretty soon, nobody can tell if you are or you're not. And we don't wanna do one of these things either.
Sunday morning! Monday morning. Sunday morning! Monday morning. You know what I mean? We love God on Sunday, and on Monday you couldn't pick us out of a crowd, because we're out there acting just like everybody else and nobody knows the difference, amen? And I tell you the truth, it's something you gotta make a decision to do every single day of your life. Let me tell you something. I don't wake up like this every morning. I have to stir myself up. I have to stay on fire for God.

So here's what I'm telling you. If you don't feel like you've got enough light in your life, it's not even gonna do you good to keep praying about it. You better set yourself on fire and just decide to turn the light up, amen? And we especially don't wanna just float around and compromise with the rest of the world and just keep getting dimmer, and dimmer, and dimmer, and dimmer, til all of a sudden our light just goes out and then we go to church on Sunday, whoop. Or the pastor comes to the door, whoop. Fight all the way to church like Dave and I used to. See the first person at the church door, whoop! "Praise the Lord". How many of you are getting what I'm saying?

You know what? That's the first thing we've gotta do every morning. We gotta turn the lights up. Make that little attitude adjustment that changes everything. I don't care one thing in the world about preaching anymore if I can't in every message bring people to some kind of a decision. I don't want you just to hear a good sermon and go out and not decide anything. I want you to decide tonight two things: that you are gonna help more people than you've ever helped before, and that you are gonna let God work with you every day of your life to be more and more excellent and better and better at everything that you do until you don't have to tell anybody about Jesus. They can see him all over you.

Complaining about a problem while doing nothing to change it is one of the worst things in the world that we can do. If you have a problem that you can't change, then why don't you go change somebody else's? Good, three people got that. If you have a problem you can't change, go change somebody else's problem. And if you'll do that, then God will change yours. You know, one of the ways that we celebrate our victories, and this is biblical, is when you've had a victory, to not only celebrate and do something fun that you wanna do, but to go help somebody else that has less than you.

And in Nehemiah 8:10, after the wall was built, it says: "Then Ezra told them, go your way", and I love this, "Eat the fat, drink the sweet", I guess they didn't have anything against fat or sugar. They said, I mean, you can do it in excess, but I thought that was kind of cool. I thought, "Yay, now I have permission to go eat what I want to tomorrow. Eat the fat, drink the sweet, and send portions to him for whom nothing is prepared: for this day is holy to our Lord. And be not grieved and depressed, for the joy of the Lord is your strength". So they were commanded to not only celebrate the victory they had, but to send portions of the food that they had and blessings to somebody else who had less than them. It takes a while in our lives to get this, but I can tell you something, one of the highest forms of spiritual warfare that you can do is to be a blessing to other people, especially when you don't feel like it.

The story of Esther is the same thing. Wicked Haman had a plot to destroy all of God's people, but God wanted to use Esther to do something about it. At first she was not just all over that idea. I'm sure she had plans for her life, and she had some fear, and her uncle said to her, "How do you know but that you were called for such a time as this? And if you don't do what God's asking you to do, he will raise up somebody else to do it". And I believe there's a lot of people that are called for such a time as this. I don't believe that we're alive in this day and hour by accident because we just happened to show up on planet earth when things are so bad out in the world.

I believe that we are chosen by God to live in this time-frame, and we have a purpose, and God has a plan and he expects every one of us to help him in whatever way that we can to get as many people as we can on board for Jesus, because before he comes back and a lot of people get lost. I won't go over the whole thing, but it's the same thing. After they had their victory they set aside two days that they had to celebrate every single year to remember the victory God had given them. And one of the things he told them is, "This is a day of feasting and gladness, a holiday and a time for you to send gifts to the poor and portions to one another".

And I wanna tell you something. Life gets so exciting if you go out every day and you're just a little Holy Ghost spy for God. Every day can get exciting. You won't have to lay down with all your problems anymore and be depressed and in prostration. You can get up and say, "God, what are we gonna do today"? And it may be something teeny-tiny. It may be something big. But you will have a fulfillment that you cannot even imagine.