Joyce Meyer - What To Do When God Does Not Pick You? 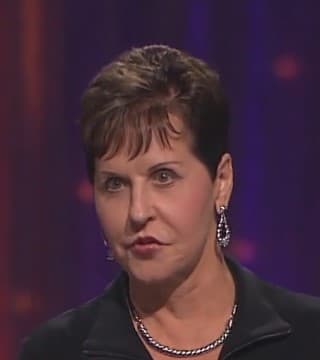 Have you ever thought to yourself, "God, this isn't fair"? Please tell me you have because I just don't want to feel like I'm the only one, and I'm sure I'm not. Or ask questions like, "Why is that person getting what I want? Why is life easier for them than it is for me? Do you love me as much as you love others?"

Well, there are many circumstances that just don't make sense to us, and sometimes God doesn't explain why. Joyce is going to talk about that today, and she's also going to explain what to do when God doesn't pick you.

Now, we're going to begin in "And i will establish my covenant or my pledge with you. Never again shall all the flesh be cut off by the waters of a flood; neither shall there ever again be a flood to destroy the earth and make it corrupt".

Doesn't mean that there'll never be floods, but there will never be another one that will destroy the whole earth. God's talking to Noah, who obediently built an ark according to God's instructions so those who would believe can go in and be saved from a flood that was coming up to destroy the earth because of the wickedness in the earth.

And I believe that no matter how much wickedness is in the earth that God's always got an ark for His people. That we can get in and be safe right in the middle of the mess, amen?

And God said, "Now, here is a token of the covenant (the solemn pledge) which I am making between me and you and between every living creature that is with you for all future generations. I will set my bow or my rainbow in the clouds, and it shall be a token or a sign of a covenant or a solemn pledge between me and the whole earth".

So, now when it rains, when we have storms, we usually get a rainbow after the storm. And we all like rainbows, they're beautiful and they just have a tendency to bring promise. And you really think you've done something if you get a double rainbow, that's really a good one.

Well, you know, I'm quite sure that Noah needed a rainbow after what he'd been through. And I have a feeling that some of you could use a good rainbow day too in your life. Noah surely had gone through a lot in being obedient to God.

And you know, being obedient to God doesn't always brings claps and cheers from everybody else. Many times while you're trying to be obedient to God, somebody else that you love that you need their support and their love is against you.

Why is it when you try to do what's right, the devil always tries to provide somebody that can be against you? You know, because the bible actually promises us that we will be persecuted for righteousness' sake.

I could tell you my own stories, I'm sure you've got yours. We won't get into all that tonight, but I had to go through a lot of things in the beginning to fight my way through all the naysayers and the people who thought that I shouldn't be teaching the word because I didn't have the right education, I didn't have the right personality, I was a female, and all kinds of stuff.

But I knew, at least I believed with all my heart, that God had called me and there was good fruit in what I was doing, and I just kept at it and kept at it. I lost some friends, but God gave me back a lot more than what I lost. And so, anyway, that's another whole story for another time, but I know there were days in my life when I could've certainly used a rainbow day. Yes, I'm quite sure that Noah needed that rainbow.

Now, let's fast forward a little bit to Genesis 12, we don't have to go too many chapters over, and we see another man show up that God's going to make a covenant up with, a man named Abram.

Now, he did require something of Abram before Abram heard this promise. He said, "I want you to go for your own advantage away from your father's house and all that you're accustomed to, to the land that I will show you".

Do you know that sometimes God will require you to get away from some people that are poisoning your life? I mean, honestly, some people could just change their whole walk with God by just getting a new set of friends. I mean, really and truly, the people that we are around really affect us. I believe that everybody has some kind of an anointing on him, either a good one or a not so good one. And I do believe that we soak up and become like what we're around, amen?

So, you need to have some good influence in your life. And you know, a lot of people send in questions, "Well, what if I'm in a situation where, you know, I'm around somebody that I can't get away from that's negative and, you know, a wicked person. What do I do?" I said, "Then spend as much time as you possibly can with people that are good to offset that and do a lot of praying because God can protect you right in the middle of a difficult situation".

Can you imagine that? Leave everything that you're familiar with. And God did that because he was living in the midst of idol worship. And He called him to come out of there and He said, "And go to the place that I will show you".

I didn't start here on this platform. I taught home Bible Studies for 5 years and had 25 people. And I was faithful to people. I had quit a full-time job making good money to prepare for this ministry that I thought that God was going to use me in because I didn't really know the Bible and I couldn't take off to Bible School, so I studied on my own, and the Holy Spirit taught me and qualified me to do what I'm doing.

I may not have a lot of fancy degrees, but I have applied the word of God to my life, and I can tell you and shout it from the highest rooftop that the word works in our lives. And then I did nothing for a year, and during that year 'cause I thought God said, "I want you to lay these Bible Studies down. Behold, I do a new thing".

And you know, we get excited, "Behold, I do a new thing". He didn't bother to tell me what it was, but for a year, I did nothing. And that was a testing year for me to purify my vision to see if I'd hang on to it.