Joyce Meyer - The Power Of Thoughts 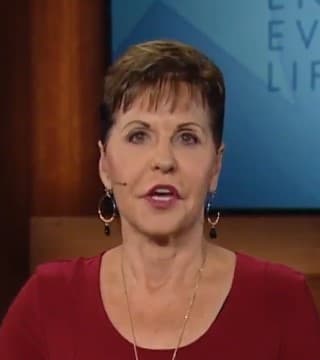 Well, thank you for joining us today for the program where you are going to hear the Word of God. And I believe that God's Word has power in it to set captives free. When you hear the Word of God spoken, it's not like just ordinary language coming to you from another human being. God's Word is spirit and it is life, and it actually has power. I call it, like, when somebody's sharing the Word with you, it's like little pellets of power are coming into your brain.

And so, today I wanna talk about the mind and thoughts and the power that they have in our lives. And, yes, I teach a lot about the mind. I've written several books on the mind. But I just felt in my heart that it was time for a little refresher course.

You know, sometimes even though we know something, it can kinda slip into the background, and we need to maybe be prompted to bring it forward again. So, even though you have heard lots of teaching on the mind, how many of you still would say that you still have a little problem with your mind from time to time? This is one teaching that never gets old.

So, 2 Corinthians 10:4 and 5: "For the weapons of our warfare," so right away we find out we're in a war and that we have weapons, "are not physical weapons of flesh and blood". Our weapons are not guns and knives and bombs and things like that, but we have weapons against satan, who is our enemy, but they are spiritual weapons. "And these weapons are mighty before God for the overthrow and destruction of strongholds".

Now, a stronghold is an area where the enemy digs in and hides himself, makes it hard for you to get to him. Well, satan does that in our minds, and he's had a long time to work at it. He'll tell people lies and kinda bury himself in those lies, and then we end up believing things that, in reality, aren't true.

So we have to make our minds up what we're gonna believe. Are we gonna believe what the world says, what people say, what we think, what we feel? Or are we going to make that decision that every person has to make if they wanna live in victory?

"I don't care how I feel or what I think or what other people say, I am going to believe God's Word. Even if it seems totally ridiculous, I am going to come to God like a little child". And, you know, you take a little child, you can tell 'em just about anything, and they'll believe you. And so, we need to come to God like little children and just believe His Word and His promises, even though it may not make much sense to us.

Now, we're in a war. We have these weapons. They're not physical weapons, so what are they? Well, the Word of God is actually a weapon. It's called, "The sword of the spirit". And so, when we speak the Word, the enemy has to back down.

If you're familiar with scripture, which doesn't really matter if you are or you aren't, but there are scriptures in Luke chapter 4 where Jesus was taken out into the wilderness to be tempted by the devil for 40 days and 40 nights.

And there are four separate occasions in the first few verses where satan said to Jesus, that's exactly how it puts it, "Satan said to Jesus," and he told him a lie. "And Jesus said to the devil," and He quoted back the Word. So, the enemy lies to us, and we have a great weapon, a great tool available to us, and that is the Word of God coming out of our mouth.

You may not realize that you are, but you do. "Well, that was stupid". "Well, I'm dumb". "Well, this is never gonna work". And so, we do talk out loud to ourselves, and we need to learn how to speak the Word of God.

Can I tell you somethin'? Satan will argue with you. He likes nothin' better than a good mental battle, and just arguin' with you, and he really loves reasoning. Boy, if he can get you just to try to figure stuff out, man, there goes your peace. There goes your joy.

And you know what? I recall one time, years ago, when God put this in my heart because I was a big, I mean, I was, like, addicted to reasoning, you know? I had to feel like everything was in a box somewhere. I got it all figured out. We like to think we've got everything all figured out in life because it makes us feel safe.

You know, hangin' out with God's a little dangerous because you never know exactly what He's gonna do or when He's gonna do it. So that's why trusting Him is so important, because we have to trust that because He's good and because He loves us, He'll do the right thing at the right time in the right way.

And so, I was really big on reasoning, and the Lord just put this in my heart. You know the little mailbox slots that you have at your offices sometimes? And so, if they wanna get somethin' to you, they'll put somethin' in your slot. Well, sometimes, people will get, or they were supposed to get somethin' but didn't get it because it was put in the wrong slot.

Well, God spoke to me and I kinda had this mental picture of those mailbox slots. And, you know, today, those are probably not as prevalent because we have email and, you know, all that stuff. But that was the system we used to work on. And He said, "You've got everything in a nice little slot, so that makes you feel comfortable. But the problem is, is you got a lot of stuff in the wrong slot".

And so, satan loves to argue with us. He loves to fill our mind full of reasoning. "Inasmuch as we refute arguments, theories, reasonings and every proud and lofty thing that sets itself up against the true knowledge of God".

I wrote a book called "The mind connection" to show that our thoughts are connected to everything else that we do in life. So, if you feel like you need a change in your life, it's never going to happen until you change your thoughts, amen?

And so, then a lot of people think, "Well, I can't help what I think". Well, actually, that's not true at all. That's what the enemy wants us to think. He wants us to think that we can't help what we think. But see, if we realize that the mind is the battlefield, and that that's where satan wages war with us, and if we know enough of the Word of God to begin to recognize what's true and what are lies.

See, it's kinda like you gotta take the time to understand this. I mean, how many years did I believe that I had no future and no hope because I'd been sexually abused by my father for so many years? I just thought I was a piece of second-rate merchandise, and I actually planned that I would have to have a second-rate life, that I would just have to be satisfied with a second-rate life. Well, I had nothing to compare it to because that was all I knew. I had years and years and years of wrong thinking.

And can I tell you somethin'? And I don't mean to be insulting, but many of you watching today, you believe a lot of lies. You may be even basing your life on those lies. And the only way you're ever gonna know what's true and what is a lie is if you become a diligent student of the Word of God.

And a lot of people think they can't understand the Word, but that's really not true. You might need a translation of the Bible that's a little easier for you to understand. You might need some help from a good Bible teacher. But God did not leave us instructions for our life and say, "Oh, and by the way, you're not gonna be able to understand any of 'em. So just get one of these books, put it on a shelf somewhere, go to church once a week, and everything'll be okay. Someday, in the sweet by and by, you'll get to go to heaven".

But that's not the life that Jesus died for us to have. He wants us to know Him in the power of His resurrection that lifts us out from among the dead, even while we're in the body.