Joyce Meyer - The Mercy Of God 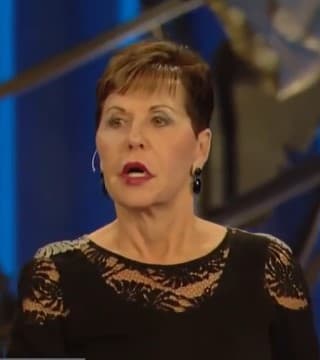 Mercy is a powerful thing, isn't it? Recently we were in Thailand, so I was teaching at 10 o'clock in the morning and 2 o'clock in the afternoon, so I taught from 10 to 11, and then we had a 3-hour break, so we went to get something to eat.

And we were sitting at this nice little restaurant, it was by a little river, and it was outside, and the weather was great. And so, I ordered some iced tea, and the waitress came up behind me. And over there, they don't serve sugar in packets, they have this little thing of syrup that they give you if you want to put it in your tea. And it's, I mean, really, really, really sweet.

And so, I didn't intend to use it, but she brought it. And she accidentally knocked it over, and it went down the front of my clothes and down my back and into the chair. And I had on a black outfit, and so at first I thought, "Well, you know, this is going to be okay, it's going to dry. We wiped it off and I told her, you know, right away, you know, "It's okay, don't worry about it."

And, but the more it dried, the more realized we weren't going to wipe it off and it was going to look pretty good. So, that left me with a situation of either having to go teach looking like that, or I had to try to find the time to go back to the hotel and change my clothes.

You know, God is merciful, and that's probably not any brand new news to most of you, but there could be somebody here tonight that you really don't know that God will extend mercy to you no matter what you've done in your life. God is merciful. And we need mercy every single day of our lives, every day.

See, I think one of the things that we really must understand about God is what He gives to us, He expects to go through us. When we get really unhappy is when we just become takers and we're not letting what God does for us flow through us. To us and through us.

God told Abraham, "I will bless you," but that's not all He said. "And I will make you a blessing, causing you to dispense good to others". I like to think about just being a dispensary of good for other people. So, to you and through you.

We are God's ambassadors, the Bible says, that He is making His appeal to the world through us. Every single one of you are called into ministry. It's not just a handful of people on the platform. Matter of fact, our main job is to train you how to do the ministry. That's what Paul said, we're called to train up people that they might go out and do the work of the ministry.

And I think that we're in a situation in life today where we need a revolution of mercy. Now, a revolution means a radical change in the way things are. And I'll tell you what, if we don't need change in our society and if you don't think that the world is without mercy, just go out and drive in traffic for minutes.

Just you dare make one, I mean even little, teeny, tiny mistake. And don't expect somebody to say, "Oh, they just made a mistake." I mean, you're going to get words and signals and horns. I mean, don't you ever just think, "Can't you just give me a break?"

So, we want to make sure that we don't treat people like that because everything that we do, every way that we treat people, we're sowing a seed. God is merciful. Over and over and over, the Bible talks about God's mercy. I want to give you just a few scriptures.

Lamentations 3:22 and 23, "It is because of the Lord's mercy and loving kindness that we are not consumed." You know, sin would literally consume us. It would just weigh us down and make us so heavy that it would kill us if it wasn't for God's mercy, because his tender compassions fail not. They are new every morning.

2 Corinthians 1:3 through 4 says, "Blessed be the God and Father of our Lord Jesus Christ, the Father of sympathy (pity and mercy)." He's the Father of mercy. God is the one who birthed mercy. There would be no mercy if it weren't for God. "Who is the source of every comfort (consolation and encouragement)."

All comfort and consolation and encouragement comes from God. Even if it comes through us to somebody else, it still comes from God. "Who comforts," now listen to this, verse 4, "Who comforts (consoles and encourages) us in every trouble (calamity and affliction) so that we may be able to comfort (console and encourage) those who are in any kind of trouble or distress with the comfort with which we ourselves are comforted by God."

How many of you see it? That's so wonderful, to you and through you. God comforts us so we'll know what it feels like to receive that comfort. And then the first thing we should want to do is give that away to somebody else.

Now, I'm going to share something with you that I really believe. A lot of Christians are unhappy because they only sit in church and let something come to them. Nothing's going through them. They come to get their blessing and that's as far as it goes.

Tell you just a quick story. A woman was coming to my conferences for years and years, sat under my teaching for years. And I had one big conference every year in St. Louis, we call it our yearly women's conference.

Pastor Joel was going to come and speak there again this year, and this year will be our 35th year to have that conference. And she had come year after year after year, and watch me on TV, used to come to my other conferences. And she was starting to not get much out of my teaching, and so she started praying for me because she thought I was losing my anointing.

She even went so far as to ask God if I had sin in my life because she didn't feel that I was as anointed as I once was. And God began to deal with her, and she came and told me, she said, "God began to deal with me and He said, 'she hasn't lost her anointing. You're not getting anything because you're full. There's no place to put anything. And until you start putting some of it out, don't expect so, the next conference she came to, she came ready to be a blessing".

What would happen in the church if every person who calls themselves a christian went out of their house every day ready? I'm talking ready. You're prayed up, you're ready, you're looking for somebody to help. You can't wait for somebody to offend you so you can give them some of the same mercy that God gave you.

It's almost like, "Come on, I dare you to offend me. I'm ready. I'm ready." What a difference it would make if Christians would really begin to not just sit in church and be fed, but to actually let what comes to them go through them.

Now, God is merciful and I'm not going to give you any more scriptures on that. There's hundreds of them in the Bible. If you want to read any more, just read Psalms, God is merciful. But we have to learn how to receive God's mercy. And I can stand here and talk about this for a long time because there are people even in this place tonight, even though you believe God is merciful and you believe that God gives mercy to people, you really have not yet received God's mercy for yourself.

Receiving is the second part. God gives it, we receive it, we let it heal us, then it can flow through us. But just to say God is merciful isn't good enough. Now, let's talk about two words, the word "Get" and the word "Receive." We get mixed up. God never tells us to get anything.

You cannot find a scripture that talks about one of the promises of God that says, "Go get that promise." It either says you've got it, you have it, you are redeemed, you have been sanctified, and so God wants us to believe we already have it, or He wants us to receive it by faith.

Paul said to the Corinthians, "Have you received the Holy Spirit?" We receive from God. You say, "Well, Joyce, what's the big deal?" Well, here's the big deal. The word "Get," if you look it up in a dictionary, means to obtain by struggle and effort. You can't get God's mercy. You can't buy God's mercy. The only thing you can do is receive it. And it's very unreasonable.

Mercy is downright ridiculous. And how can you reason out something that is unreasonable? I can't figure out why God would just forgive me for some of the stuff that I've done, but He can if He wants to because He's God. And mercy is part of who He is. It's not even just something He does, it's part of who He is.

He just cannot help Himself. It's like the love of God. God doesn't turn love on and off. I've been saying this to people and they look at me really strange, so I'm going to see if you guys look at me as strange as most people do. Do you know that no matter where you're at in your walk with God right now, God will never love you any more than he does at this moment right now?

If I behave better tomorrow than I did today, God's not going to love me more tomorrow than he did today. I may feel better by myself, and yes, things will work better for me and it will please God, but He doesn't love in degrees. He doesn't love a little bit, or a little bit more. It's not based on our behavior. God is love. It's not what He does, it's who He is. He just can't help it. I'm sorry, but God just loves you. And He just is merciful.