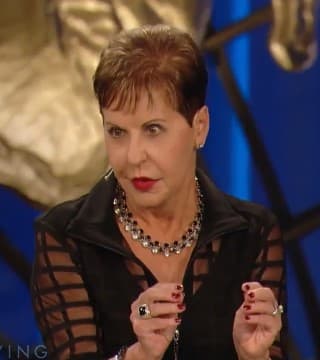 I would like to start with a question. How many of you have a dream or a goal or something that you believe is God's will for you, but nothing's happening? This is probably going to be for everybody tonight. Or maybe a little something is happening.

You know, but if you have a big dream or a big goal, you get tired of a little really quick. And it gets frustrating, anybody understand frustrating? Okay. It gets discouraging, discouraging. And it can also get confusing.

And you know why it gets confusing sometimes? Because the things that we need God to do, it's like, "God, it's not that big a deal. You are God. You can do this. Won't take your whole day or anything, you can just look in my direction and get this done".

And so, sometimes it's very frustrating when, first of all, we believe God has put something in our heart, He's the only one that can bring it to pass, we know He could without much effort, but He just won't yet, or He hasn't.

Well, I'm going to kind of back up and tell you a little bit of story. When God first called me to teach, for the first 5 years, I just taught a home Bible Study. Two and a half years I taught one. And then the last 2 and a half years of the 5 years, I taught 2. And I ministered to 20, 25 people every week.

You know, God is not going to unleash you in the world until you learn how to handle the little bit. Be faithful in a little bit and then God will give you more. And so, then I went to work at a church in my home city, St. Louis, and for 5 years. I want you to notice I taught home bible studies 5 years, not 5 minutes. I stuck with that for 5 years. That's not really what I wanted to do.

I had a big dream, but a little ministry. Some of you here tonight, you have a big dream, but only something little is happening in your life. And I get that, I understand how frustrating that can be, but God does have a purpose in everything that He does.

So, then I went to work for a church in St. Louis, and I worked for somebody else for 5 years. And you know, when you want to kind of do what you believe you're supposed to do, working for somebody else who wants you to do what they want you to do is not always the most exciting thing in the world. But that was important too because we have no business being in authority until we know how to come under authority.

Matter of fact, I think I'm just going to go ahead and say that again. We have no business being in authority until we first know how to come under authority. And submission, by the way, is not an act we put on, it's an attitude that we live with, amen?

Even like with my husband Dave, I got to the point where I could look at him and say, "Yes, honey". But inside, I wasn't, "Yes, honey," what I was thinking. And God had to teach me, "This is not an act that you put on because I know what's in your heart". Amen?

Well, that was a nice suggestion, but nobody knew me anywhere outside of my city because that's the only place I'd ministered. I was on one radio station. So, I was childlike obedient, and I live in St. Louis, and so I started a meeting in North St. Louis, East St. Louis, West St. Louis, and South St. Louis. I went North, South, East, and West. And it it started working, but everything was so little.

Well, then we finally got on about eight radio stations, and so waiting for the mail to come was a big thing. Because you wanted to know that there were people out there listening, and the only way you knew they were listening was if you heard from them in some way.

And then we were also very desperate for finances because we didn't have somebody else giving us a paycheck. We had to believe God for every single cent that came in. And by the end, we had two or three employees, and they wanted to get paid and all that stuff.

And so, I remember one day, I was on my way to that mailbox, already dreading going. And you know, the Bible says that great fear is to dread a dread. And so, I was already dreading the dreadful feeling I was going to have.

How many of you maybe get that, like when you have a child that hasn't done real good in school, and they're going to bring home the report card today, and you're already dread it before it ever happens? You know, maybe you took a test at the doctor and you're waiting for the phone to ring, and you're already dreading for the phone to ring or whatever the case might be. So, we got to be careful about setting ourself up for misery before we ever know what's going to happen.

But anyway, I was sitting at a stoplight, I still remember exactly where I was at in my city, and I was very frustrated, and I said, "God, why can You not at least provide a little mail every day? I mean, You're the One that called me to do this, and You put a big dream in my heart, and I am so frustrated 'cause I know You can do this and I just don't understand why You don't".