Joyce Meyer - No Parking At Any Time 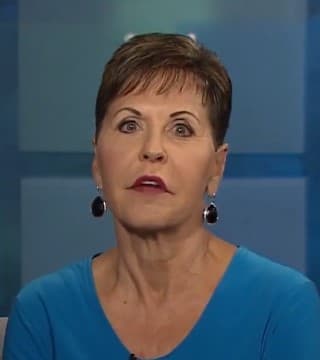 All right, how many of you see my sign? That's the title of my message tonight, "No parking at any time." Some of you have had your life in park for way too long, and it's time to get it out of park, put it in gear, and put Jesus in the driver's seat, and get going. We're going to start with Genesis 11 and verse 31. "Terah took Abram his son and Lot the son of Haran, his grandson, and Sarai his daughter-in-law, his son Abram's wife, and they went forth together from Ur of the Chaldeans to go into the land of Canaan, but..."

Now, you know, that word always creates a problem, always. You can see that they started out for somewhere, but when they came to Haran, they settled there. They settled. I've come to kind of despise that word because I think far too many people settle. They settle for a life that's so much less than what Jesus wants to give them. They settle for staying at a job that they can't stand just because they'll make a few more dollars there than they would if they went and did what they really loved. They have a dream for their life, they have a goal, and it gets a little tough, it gets a little hard, and so they settle.

And how many women even settle for a guy that they know is not really right, but they're just kind of desperate and afraid they'll never have anybody, so they get themselves into another mess that lasts for a lifetime because they didn't want to wait for the right thing? And I think it's time that we stop settling and we start going all the way through with God, all the way through to the place where we start out to go when we get started. Wouldn't it be kind of foolish if we started this conference, and halfway through decided, "Well, it's been enough. We've worked hard enough this weekend. We're just going to settle right here and not finish the rest of it." You'd all think we were about half crazy, but yet people do that all the time in their lives. And then verse 32 says, and this is the part that I think is really important, "And Terah lived 205 years, and Terah died in Haran." So actually, here's the thing that I've learned. He started out to go to Canaan, but he settled in Haran, and he died where he settled. He died where he settled.

Now, you might keep breathing, but if you settle for less than what's really in your heart, there's going to be something in you that's going to die. Something in your soul is going to sour and give up because all of us, if you're christian, God has put a desire in you to not be mediocre, to be all you can be, to be excellent, and to do something worth doing other than just walking around the planet, and just breathing, and taking up space, amen? But it takes a little bit of courage, doesn't it?

Years ago, when I was first... or really, at that time, all I had was a home Bible Study in my home. And I was getting ready to go to a little... it wasn't a Bible college thing, but it was a 3-night-a-week thing at my church where we were going to learn more about the Bible. They called it the Elijah program. And somehow, somewhere during that time, I got really tired and worn out. We had kids, and we're trying to do all this stuff. And one night, I had a dream, and I dreamed that I was driving in my car. And I saw a bridge up ahead, and there was a little bit of water covering the bridge. It wasn't a lot of deep water, but it was some water that was going to make it a little bit difficult to drive through.

And I noticed that some people were turning around, going back in the other direction. A lot of people were pulling off to the side and parked. And so, I pulled off to the side and parked, and I kept... in my dream, I would look at the bridge and the water, and then I'd look behind me, and then I'd look at the bridge, and then I'd look behind me. I was trying to make a decision about whether to go on or to turn back. And when I woke up, immediately God showed me what the dream meant. He said, "In life and on this journey that I've called you on, there's going to be lots of places in the road where you can pull off to the side and park. But you can also decide to go all the way through and finish your journey." And I'm going to tell you, some of you have pulled off to the side of the road of life, and you have parked somewhere. It's time for you to get it in gear and get going again because God gives dreams and He doesn't take them back. They're still there waiting for you. There's still time for you to be all you can be, the best person that you can be, the greatest person that you can be, and you can do that for God's glory, amen?

Now, God promises us healing and restoration. And we're going to talk a fair amount about that this weekend. You know, we cannot always avoid the pain that wounds us, but we can choose to not let it ruin the remainder of our lives. Many people in here have been hurt, some very badly. And some of you have done some really bad things in your life. And I think that a lot of times, people park at the point of their pain. How many people get hurt by their parents and they never really ever get over that? You might have somebody who was adopted, for whatever reason their parents didn't want them, they weren't able to keep them. Or let's just take it to the extreme, they didn't want them. They didn't want them. And they can spend their whole entire life, whole life trying to recover from that.

And many of you know Christine Caine's story and, you know, I don't want to get into whatever she might be going to share in her messages, but even if I do, she'll share it better than me. You know, she found out when she was, what, 30, 33 that she was adopted. She never knew that. And make a long story short, she finally got ahold of her birth certificate and her birth certificate said, "Unwanted and unnamed." Unwanted and unnamed, and look at her now. Look at what she's doing now. Look at her. She didn't park at the point of her pain.

My father sexually abused me for as many years as I could possibly remember. I didn't park at the point of my pain. I decided I was going to go ahead and have a life. I remember meeting a woman in a restaurant in Utah. And as soon as she saw me and recognized me, she wanted to tell me her story, and so she was telling me how bad things how, and how bad things have been, and she said, "I'll tell you, Joyce, life has just thrown me under the bus." I said, "You know what? It did me too, but I decided to drive it." I mean, it's time to shake some of this stuff off. It's time to stop just living your life with a chip on your shoulder, acting like everybody owes you something because you went through some pain. There's no doubt if you've been hurt, you are owed something. But I'll tell you what, God is the only Person that can pay you back, nobody else can. And as long as you're trying to collect from the wrong people, you are going to be miserable and stay miserable.

God is in the business of healing and restoration. Your entire life does not have to be ruined because somebody hurt you way back when, or last week, or last night, or... and even if you did some terrible things, there are people sitting in here tonight and I'm sure, people watching by TV that, like Ms. Shepherd, you've done something wrong, and you're hiding it. Maybe you didn't hit somebody with your van and run off, but maybe you hurt somebody. Maybe you're in prostitution. Maybe you had several abortions, and now you wished that you wouldn't have done that. You know, regret is pretty much useless. We can be sorry for the things that we've done, but then we need to receive our forgiveness and we need to go on. I mean, living with regret will just suck the life right out of you, amen? And if you've done wrong things in the past and you're still holding that against yourself, it's time for you to say, "I am going to shake that off"