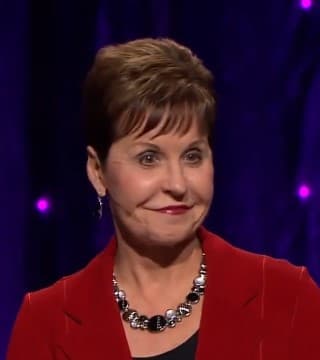 Blessed are those who hunger and thirst after righteousness.

Do you know somebody who really, really, really wants to do what's right will do it? Hat doesn't mean there won't be a price to pay. I'm gonna tell you the truth. If you make some of the choices that I'm sure God is leading you to make, you might lose a few friends. But I can pretty much guarantee you they're probably not very good friends anyway.

Actually, some of you, if you made the choice to do what you really, really, really, really know is right, you could possibly even lose a job. "Well, Joyce, I can't do that". Well, it's better to do that than to displease God, because you know what? God got you that job, and if you honor Him in it, He can get you a better one.

How many of you know that there are employers who will pretty much tell you that you have to sin in order to keep your job? I had an employer one time who told me that I needed to lie to a customer, and I refused to do it, thinking I was gonna lose my job, and it would not have been a good time for me to lose my job.

Let me tell you something. Sometimes the devil tries to frighten us that if we do what's right, we're gonna lose, but many times, if we honor God, we will end up advancing further than what we were, because we stood our ground "Those who hunger and thirst after righteousness".

I think if anybody behaves that way, then there's a little something lacking in their relationship with God, and I believe that we should do everything that we can do to do what's right, because there is a satisfaction in that that nothing else can give you. There's nothing worse than laying your head down on a pillow at night and tossing and turning, because you know that you should have made another choice.

You know what? I have had the sad experience in my life of mistreating people at different times. I was hurt in my childhood, and I came out of that with a hard exterior and a lot of harshness in my soul, and because of that, during the years that God was healing me and I was really learning the word, there were many times when I would be rude to people and harsh with people, and there have been a few times in my life when I've really hurt somebody.

And man, I tell you what. More than anything, now I cannot stand to hurt people. I mean, I do not want to hurt people, and I think that there's so many things that maybe we once were, that we don't have to continue to be if we let God deal with us. It's not good to hurt people.

I spent half of my early part of my life mad at somebody. Thank God I don't waste my time being mad anymore. I wanted to change, and God has changed me. And there's other things in my life now that I want to see God take care of, and I want them bad enough that I'm not gonna put up with them.

You know what? I believe that sometimes, we need to get a little bit violent with the sin in our lives. I think sometimes we need to say, "I am not gonna live like this. Christ died for me. I have the victory. I am dead to sin. I am alive to righteousness. The Holy Ghost lives on the inside of me. The grace of God is available to help me get over this, and I am not just gonna put up with it and let the devil run my life," amen?