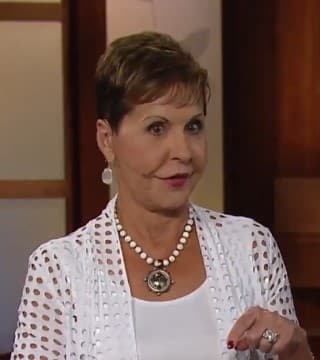 Well, thank you for joining us today on "Enjoying Everyday Life". And you know, the way I feel that we can enjoy our life the most is if we really learn the importance of doing what Jesus told us to do. Everything He tells us to do is ultimately for our benefit. It's going to make our lives much better.

And so, I don't know about you, but I need to sometimes hear the same stuff over and over and over again. And so, one of my favorite sections of scripture is John chapter 13, the first 17 verses, where Jesus washed the disciples' feet.

I think it's something that we need to remember that He said to do, and then make sure that we do that, and kind of discuss today what does that actually really mean.

I mean, in their culture, people wore sandals if they wore shoes at all, and the roads weren't paved like they are today, and so feet were quite dirty and dusty. And it was very customary when a guest came to your house to wash their feet.

Actually, it was considered an insult if you didn't do it or you didn't have somebody to do it. But it was usually a servant who did it. It wouldn't have maybe been the master of the house, it would've been the servant. And so, Jesus not only taught with words, but He taught by example.

And that's something that I try to remember in my life, have to remind myself from time to time. But even with our children, it really doesn't do any good to tell them what to do, but then have them see you do the opposite of what you told them.

So, actually we could do less talking and more doing of the right thing, and probably teach people more than we do with all of our talking. And you know, sometimes we get a little bit proud of what we think we know, and so we like to tell everybody what we think we know.

Well, one of the things that I've had to face is that I really don't know anything unless I'm doing it. No matter how many scriptures I have underlined and highlighted in various colors in my Bible, if I'm not doing them, then I still really don't know them. Maybe it's in my head, but it hasn't gotten down into my heart yet.

So, there's several lessons I think that we can get out of these 17 verses, so let's just start. "Now, before the passover feast began," I'm starting in verse 1 of John 13, "Jesus knew and was fully aware that the time had come for Him to leave the world and return to the Father. And He had loved those who were His own in the world, and He loved them to the last and to the highest degree".

So, first of all, I think that Jesus knows that He's going to very soon be ascending to the Father. And He's had these disciples that He's been training that He already knows are going to be the ones that are going to carry the gospel to the known world at that time.

And so, He doesn't have a great deal of time left to show them anything or teach them anything. And so, I think that some of the things that we see Jesus teach them or say to them in this last little bit of time that He has are super important.

Like in John chapter 14, He talked to them about peace. He was ready to leave, and He said, "My peace I leave with you. Stop allowing yourselves to be upset and disturbed". So, I take that that that's something that's really important for my life is I need to make sure that I stay in peace at all times.

And I don't know about you, but that doesn't happen accidentally for me. I have to be determined to do that. And so, now He's getting ready to tell them something He apparently feels is very important because He doesn't have a lot of time left to tell them anything.

Verse 2, "So it was during supper, satan having already put the thought of betraying Jesus into the heart of Judas Iscariot". So, we see plainly from that that the devil puts thoughts into our head.

So, every thought that you have is not necessarily one that you've generated. If it's a thought that doesn't agree with the Word of God, then you can be pretty sure that the enemy put it in your head, and you can accept it or reject it. And here again, you know, where the mind goes, the man follows.

I love that little saying that God gave me a long time ago. I think that when we think about something, it's going to come out of our mouth, and we're going to end up doing it. So, I've kind of discovered that if I want to do the right thing, I have to spend a certain amount of time meditating or thinking about doing the right thing.

So, Jesus knew that Judas already had had that thought of betraying Him. And verse 3 is especially important, so won't want to miss this. "That Jesus, knowing fully aware that the Father had put everything into His hands, and that He had come from God and was now returning to God".

So, He knew the power that He had. He knew that He could do anything that He wanted to, that nobody could make Him do anything. He knew where He came from, He knew where He was going, and look what He did. "He got up from supper, took off his garment, and taking a [servant's] towel, He fastened it around His waist. And He poured water into the wash basin and He began to wash the disciples' feet and to wipe them with the [servant's] towel with which He was girded".

So, I think a really good leader is someone that doesn't have to try to maintain this position all the time. You don't have to come in and take authority. You can just walk in your authority on a regular basis.

And even as a parent, when my kids were younger, I learned that one of the things that was very good was to let them know about some of my mistakes. I didn't always have to pretend to be the perfect parent that was always telling them what they should and shouldn't do. Many times even when they would need a correction, I would share with them something along those same lines that I had done wrong and made a mistake in.

It's amazing how if we're willing to lay aside our perfection and share our weaknesses with people, how it kind of disarms them, and it does something to the pride factor in all of us, and people are suddenly willing to listen because, oh hey, you have problems too.

So, Jesus knew that He could take off His garment, that He could put it back on, and that He didn't lose His position of power in who He was if He gave himself to something that in that culture would've been considered a lowly task.

So, I want to say something. I want to make sure that everybody gets this today. Your career, your job does not define who you are. And we could probably just camp right there for a long time because so many people say, "Well, I'm just a. I'm just a stay at home mom. I'm just a whatever, ditch digger, a janitor. I'm just..."

And I might add I think it might be harder to faithfully give yourself to a small task that didn't really seem to be that important to the world and do that faithfully all of your life, that probably is much more difficult than being the person that's in charge. Amen?

Billy Graham said one time, he said, "I think that I'm getting a lot of my reward right here on earth," because of all the attention that you get when you're in a position like that. But he said, "The person who's prayed for me all these years is the one that will get the greater reward in heaven".

So, always remember no matter how tiny you think your little assignment is, God assigns great reward to small tasks, especially if they're done with a really good heart.

So, somewhere along the line, we have to make up our minds who we want to live for. And remember that what we do in secret, God rewards in the open. So, let me say again your career, your job does not define who you are. Who you are is who you are in Christ. And your job doesn't add to that or take away from it because we can only do what we're anointed and gifted to do.