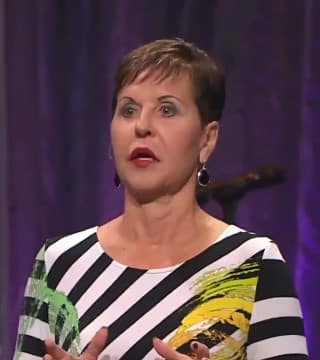 Can I tell you a secret? You cannot ever make somebody else love God. No, I don't care how much you want to. The very best thing that you can do is pray and simply be a great example. Live your life in such a way where your kids, and your spouse, or your mom and dad, or whoever you're concerned about, where they see something in you that they want and just pray.

I don't know why we think that, "Well, I've done everything else I know to do, I guess I'll pray". I mean, that's just the silliest statement. That should always be our first line of defense.

So, our two boys really run all the logistical part of the ministry. I did that for a lot of years but not anymore, thank God. I just preach, and teach, and write, and pray, and do interviews, and do my television, and get to deal with the stuff that I'm the most gifted for.

And but our oldest son David, my gosh, I thought that boy would kill me. I mean, I didn't know what the problem was then, now I look back and I wish I would have known then what I know now. We all say that but we can't, you know?

And I struggled with him really mainly because he was just like me, and I didn't know that. And we were both real strong willed and I swear from the time he was in his crib, I could see him looking through those little bars thinking, "How can I take over the world"? And so, you know, we think having a strong willed child is the worst thing out there but then you also get one that is like undisciplined, and kind of lazy, and don't care about nothing, and everything's okay.

And so, you bounce back and forth between just trying to change everybody in your family. I had one that was a perfectionist, one that's a phlegmatic, two that are type a cholerics. And so, like everybody else, you just have fun. And then Dave is just okay with whatever. You know, he's just like Dave's just good. I always say there's about three areas that you don't want to mess with him with but if you can handle that, all the rest of it's pretty good. We don't bother his golf. My daughter got him a sign the other day that said, "I gave up golf once and it was the most terrifying weekend of my life".

Well now, that boy that I thought would drive me crazy runs our world missions and we have works all over the world. And matter of fact, I got a text from him this morning and it had the temperature gauge on it where he's at in India. And we have a foreign director over there that's worked for us for 19 years that runs our office in India, his name is Scott and he said "I'm going to Scott son's graduation today and here's the temperature. Where he's at today, it's 107," amen.