Joyce Meyer - God, Where Are You? 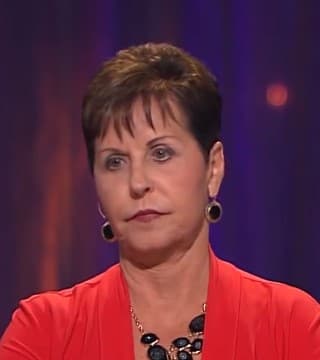 You are never hidden from Bod. He sees everything, knows everything. God has His eyes on you all the time and He never stops thinking about you. God has never one time in your whole life ever had one bad thought about you. How's that for happy? That should make us happy. I'm sure that I don't know anybody else that's never had a bad thought about me, but God has never, ever had one bad thought about us. And you know, sometimes we can get ourselves in some pretty good sized messes, amen? But thankfully, God is a God of restoration, and when we cry out to Him sincerely, He will always come and help us get back on the path that we need to be on.

Genesis chapter 21, okay, "So Abraham rose up early in the morning and took bread and a bottle of water and gave them to Hagar, putting them on her shoulders, and he sent her and the youth away. And she wandered on aimlessly and lost her way in the wilderness of Beersheba."

Now, just to give you a capsule of background, Abraham had a promise from God that He would have His own heir, His own child. The problem with that was that he and his wife were both way past child-bearing years. So, the only way that that can happen would be by an outstanding miracle of God. And this promise was given to Abraham, and years went by, and years went by. And Sarah began to think, "Well, surely God needs a little bit of help," so she got a bright idea. Basically saying, "I've got a plan. Follow Me and I'm gonna get you out of this"

Does anybody here know what a bright idea is? And she decided that she would give her handmaiden to Abraham to be his secondary wife, and then that she would get pregnant and bear a child. Then, she would take that child and raise it as her own, and that was the way that she would get God's will. As soon as Hagar discovered she was pregnant, then she got a bad attitude towards Sarah. Now Sarah's blaming Abraham and wanting him to do something about it. So finally, she just put her foot down and said, "I can't put up with this anymore. You gotta get rid of that woman and you gotta get rid of the child." 'cause by now, they had their own child, Isaac, whose name meant "Laughter." Ishmael, the son that was not of promise but of works, his name meant "Man of war."

Anytime we get something by our works, it's gonna cause war in our life. If we wait for God, we can laugh and watch God work. And so, the lad was probably a young teenager, and Abraham had to send her and him away, although it broke his heart to do so, trusting god to take care of them. So, now they're out in the wilderness.

"Now when the water in the bottle was all gone, Hagar caused the youth to lie down under one of the shrubs. And then she went and sat down opposite him a good way off, about a bowshot, for she said, let me not see the death of the lad. And she sat down opposite him, and he lifted up his voice and he wept and she raised her voice and wept. And God heard the voice of the youth, and the angel of God called to Hagar out of heaven and said to her, what troubles you, Hagar? Fear not, for God has heard the voice of the youth where he is." The first time I saw that in the Bible many years ago, it just really struck me that when the boy cried out, God didn't come and chastise them for all their mistakes. He just said, "I know where you're at. I know the situation you're in."