Joyce Meyer - God, What Do You Want Me To Do? 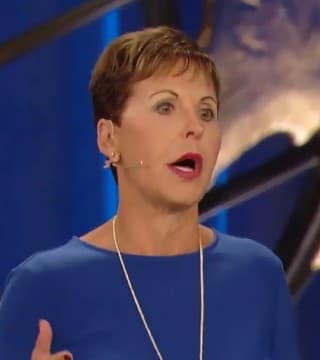 It amazes me, I continue to be amazed at how much is in just one chapter of the Bible. But if we just read through it, many times, we miss a lot of what's there. And so, today, I wanna share with you this morning out of John chapter 21. In John chapter 21, there are nine different lessons, just in that one chapter of the Bible. I won't stand here and promise we'll get through all nine, because I know how I am, but we'll do the best that we can. All right, John chapter 21, verse 1: "After this, Jesus let Himself be seen and revealed Himself again to the disciples, at the Sea of Tiberias. And He did it in this way".

Now, just try to kinda get a picture of this. "There were together Simon Peter, and Thomas, called the twin, and Nathanael from Cana of Galilee, and the sons of Zebedee, and two others of His disciples". So, they're all sittin' around in a group, I guess, kinda thinkin' about what they wanna do, like we do some days. "And Simon Peter said to them, 'I am goin' fishing!'" Exclamation mark, now, that always caught my attention because of the exclamation mark that's there. So, he must have said it with some emphasis, or maybe, and I don't know this for sure, but maybe Peter and some of the disciples were just a little bit, I don't know, frustrated.

You know, they had these thoughts about Jesus and what was gonna happen, and here, He died, and He's gone now, and I don't know. Maybe they thought He was gonna come back and do somethin', and they haven't seen Him in a while, and nothing's happening. And so, Peter was a fisherman before Jesus called him, and so now it kinda seems like he's just decided he's gonna go back and do what he used to do. You know, you gotta be careful if you feel like Jesus hasn't shown up in your life for a while that you don't decide to just go back and do what you used to do, amen?

Now, see the lesson there that we wouldn't have got if we wouldn't have slowed down and really looked at that. Second thing here is, "And they said to him, 'and we're comin' with you!'" Exclamation mark, well, I like that too. Do you know that a leader, or the head of a family, there's a certain gift on them for persuasion? And, you know, it's bad enough to send yourself, but it's doubly bad when you drag other people into it. And so, it's just interesting, whatever a leader does, without even really telling other people to do it, people will follow them.

Years ago, when I first started what was a women's ministry at that time, my hair was a little bit longer, and I wore it pulled back on the side with combs. I pulled it back with combs, and they had a little decoration on 'em. And I never told anybody to do it, but it wasn't long, and almost all the women in the church were wearin' combs with their hair pulled back. So, you need to realize, if you wanna lead something, that you better be leading people in the right direction. Because now, you're not only responsible for yourself, but you're gonna be responsible for some of the things that you lead and guide them to do. Same way with parenting. Your kids are gonna do a lot more of what they see you do than what you tell them to do, amen? See what we're learnin' already?

Now, "So they went out and they got into the boat," and here comes the next message, "And throughout the night they caught nothing". See what happens when you just jump up and make your own decision and do your own thing? "Ooh, nothin' else has happened. I'm goin' fishin'". "Yeah, we're gonna come with ya". And guess what? They caught nothing. Some of you haven't caught anything in a long time. And you don't understand why God's not come on, now, God doesn't have to bless our plan. His plan is already blessed. Come on, maybe somebody this morning could just make a slight turn and things would get so much better for you.

Now, you know, I'm not suggesting that you have to have a 3-day prayer meeting to decide if you can fishin' or not. I mean, we all do a lot of thing that we'd like to do, but there is a principle here that we don't wanna miss, and that is that the Bible says in proverbs, and I love this, "In all your ways acknowledge him". So, I just think it's good to start your day, "Now, Lord, this is what I have planned today, but if what I have planned is not what You want, then You're welcome to interrupt me and give me the grace to go in whatever direction You want me to go in," amen?