Joyce Meyer - Get Your Hopes Up 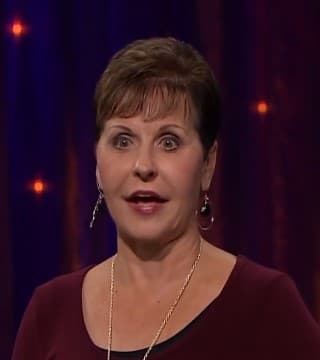 I'm getting really happy up here. Now you know Job had a bad deal, I mean he went through it. And his friends sure didn't help him. I mean they got around to blaming him and finding all kinds of fault with him and it just wasn't good. And in verse 10 it says, "And the Lord turned the captivity of Job and restored his fortunes, when he prayed for his friends; and the Lord gave Job twice as much as he had before." When he prayed for his friends... Now, I have to just be honest with you today and tell you that I can preach a happy message all day long and leave everybody just skipping out of here, but this is not gonna work in your life if you don't stop being mad at people. The promises of God do come with conditions. Faith doesn't work if we don't walk in love.

God says, "I will repay. I am your recompense." Why not just believe that hurting people hurt people and in all probability whoever hurt you did it out of some kind of pain in their own life or some kind of lack of knowledge? What good does it do you to hate somebody who's really already in trouble themselves with God? No wonder God asks us as his children, pray for your enemies, pray for people who act that way. Care enough about them to want to see them in heaven. Don't just help the devil destroy them by hating them. Hope brings change. If you want anybody in your life to change, don't go to lunch with your friend and say, "I just don't think Charlie will ever change." That's my best motherly look. You know there are ways that mama looks at you and you just know like, you know, the look...

So now I'm giving you that look today. No more staying mad at people. God's got a double blessing for you and I want you to have it. Amen? Hope brings change in our life. Let me just quickly tell you a few things, ten ways change does not come just in case you want to keep wasting your time, you can do these. I just thought I'd throw it out. Worry and anxiety, that's sure not gonna change anything. Struggle and frustration, that's not changing anything. Trying to change things by yourself without getting God involved in it, that don't work. Only the humble get the help, we learned that last night. Bright ideas. "I know what I'll do".

Sarah: "Oh. Okay, I'm not having a baby. I'm gonna give my handmaid to my husband and he can have intercourse with her and then that will be my baby." Ow many Ishmaels have you had while waiting for Isaac? She got tired of waiting and got a bright idea. Oh. So sure enough she had a child, named him Ishmael, which means man of war, and sure enough that's what they had. You go ahead and have Ishmael if you want to and you'll spend years changing his diapers. Come on, some of you are tracking with me just really good. You're like, "Okay, man, yup, I got him right now."

Here's another way that change won't come, hating the life you have right now. "I just hate my life. I want a different life." Embrace the life you've got and just see how good you can make it. Come on. "Well, I just don't like myself. I don't like being me." Well, you're gonna have to be you 'cause everybody else is already taken. You can't be me. Come on, we got people here today, you don't like yourself. You're like, "I don't want to be me." Well, you are you. "But, I don't like me." Well, you know what? You're in for a miserable life. You know why? Because everywhere you go, there you are. I mean you're not getting away from yourself, not for one second. You gotta go to the bathroom with you. You sleep with you. You eat with you. You drive with you. "But I don't like myself." Well, get a grip. It is what it is. Amen?

Here's a good waste of time. Not enjoying where you're at on the way to where you're going. Being selfish and self-centered and never doing anything for anybody else. That'll make you real happy. I'm a take a few minutes here and I'm gonna talk to you about the importance of being generous and being a giver because if you want to get anything in your life, you need to sow some of it. It's a law that works in the Kingdom of God. I've got some seeds up here so let's just say I see this package and wow, I'd like to have tomatoes like that. Those are nice. Well, there's only one way that I'm gonna get 'em. I've gotta give up some of my seed and plant it. Amen?

I'm gonna take just a moment to share a story with you because what's happening in our society right now is giving among believers is decreasing, it just is. And I don't want to have to not be able to get the help to somebody that they need because people don't understand the importance of being generous. And part of it is because it's not being taught as aggressively as it once was, and so I've kind of just decided that here and there as God leads me, I'm gonna do some more teaching on giving.

You know one of the reasons people don't teach on giving is because people get mad when you do. "There goes some preacher just trying to get your money." Give me a break. You know, I'm 71 years old, 71-1/2. I am not doing this to get your money. I got a house. I got a car. I got grandkids, and I've got a rocking chair. I can just go sit and rock my kids. I don't have to do this and I'm not doing it to get somebody's money. Everything that comes in, we're giving it back out trying to help people all over the world.

"Well, I heard about so and so, you know what they did." Well, I'm not so and so. I mean, there are doctors that are quacks but that don't keep you from going to one when you I mean, the devil would love it if we got afraid to teach on giving because that's actually one of the most important things that you can learn. "Give and it shall be given unto you, good measure, pressed down, shaken together, and running over." "Bring all the tithe and the offering into the storehouse that it might be meat in my house and see if I will not just open the windows of heaven and pour you out a blessing so great that you cannot contain it." Amen? God doesn't need our money, we need to give. We need to give. Why is it so hard to just give up a little bit of money?

In 1 Kings 17, there's a story and I really suggest you go read it for yourself. I'm not gonna take the time to read it all but Elijah was a great prophet and there was a famine in the land, and he was living by a brook and God was feeding him supernaturally by having... he got water there from the brook and then ravens brought him food. And I love the Bible says, "And the brook dried up."

You know when your brook dries up, God's saying it's time to move. And God spoke to him and said, "Go to Zarephath for I have provided a widow there that's gonna take care of you." So he went and he found this widow but the problem was was she was, I say, poor, broke, depressed, and suicidal.

Now wait a minute, I'm not just making it up. And that's who God sent him to. I mean come on, God, I like the bird idea better. Why would You send the greatest prophet in the land, possibly the greatest prophet ever, to somebody in that condition who said to him when he asked her for a morsel of something to eat she said, "I've only got one little bit of meal and one little bit of oil. I have just enough to bake one cake, divide it between me and my son and then we're gonna eat it and die."

I told you she was suicidal. She had her mind on death, not living. And Elijah said, "Bake it as you have said but give me a little of it first." Now, you know how that would go in the media today. "TV evangelist comes to town and robs poor, broke, depressed, suicidal widow." Amen?

Well, if God was supernaturally taking care of Elijah, Elijah didn't need the widow. He didn't need her food. She needed a miracle and in order to get one, she had to sow seed. Are ya hearing me? You cannot have a harvest in your life without sowing seed. If you need hope, give some away. If you need a breakthrough, contribute to somebody else's breakthrough. What you make happen for somebody else, God can make happen for you multiplied many times over. Amen.