Joyce Meyer - A Life Worth Living 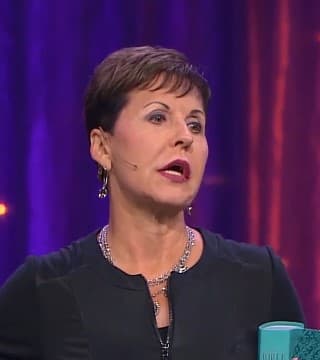 It's kind of sad that Jesus died to give us life, that we might have it and have it more abundantly and yet so many people don't like their life. A lot of people even hate their life or they're just putting up with it, they're just trying to get through, day after day. And it's not just outside the church. Many Christians are not happy Christians.

1 John 3:14 through 18, "We know that we have passed over out of death into life," and I've done enough study that I can kind of replace that death and life with a couple of other words and know that I'm not out of balance so we're gonna read it like this.

"We know that we have passed over out of misery into joy". I mean, that's what it means. You'll see later that death is all the miseries arising from sin. That's what it turns out to be. So I just think to make it practical, I wanna say it like this. "We know that we've passed over out of misery into joy by the fact that we love the brethren (our fellow Christians)".

Now John is talking about us just loving each other. We're not even all that great at that. Jesus actually goes so far as to say, "Love your enemies". And so now it's getting really major. Love unconditionally. "He who does not love abides (remains, is held and kept continually) in misery". Are we awake out there today, so have you ever been a miserable christian?

I mean, there's no excuse for that. We are supposed to be happy people. And I'll tell you what. I tried everything. Everything. And it finally came down to, for me, God just said, "You are just not happy because you are selfish". I mean, if we really get right down to it, how much do we really think about what we can do for other people? Gonna be quiet today.

Verse 15, "Anyone who hates (abominates and detests) his brother [in Christ] is [at heart] a murderer," wow, "And you know that no murderer has joy". Remember, we're changing the word life to joy. It's more than that but actually the word "Life" here is life as God has it. That's what it means.

When we have that eternal life that we receive when we receive Christ, we're supposed to have life as God lives it. And I can tell you, He's sure not on the throne today miserable. And we have it "Persevering and living within us".

You say, "Well, you know, I don't hate anybody". Well, can I tell you something? I don't think God is real fond of the color gray. Now what I mean by that is He's pretty much one way or the other, you know? You're either red hot or you're ice cold. He don't care about lukewarm. He says, "If you're lukewarm, I spit you out of My mouth".

There's some strong language in the Bible that we've kind of moved away from talking about. And it's not about making people afraid, it's about waking us up so we get out of our lethargy and realize what we're actually here for and what is the true root of our misery.

I don't want and so I, you know, I don't hate anybody. Well, do you love them? Well... But I don't hate them. But do you love them? Well... But I don't wanna say that I hate them. Well, I'm not so sure what God would say so let me just ask you this. If you love all these people then who are you mad at today? "Uhh, well. Well, you don't know what they did to me". No. C'mon, what did we do to Jesus? And yet He still loves us and loves us unconditionally.

We're gonna look at two scriptures on the problem with not forgiving people. I think it's just something we need to do this morning. I didn't even have these scriptures in this message until I got here in this city but I just feel like we need to be reminded again that this is not just something that we can do or not do depending on how we feel.

And, you know, I know what some of you are feeling, "But you don't know what they did to me!" But let me ask you a question. Is hating them solving it? Is it making it go away? Is there any way that you hating them is gonna reverse it and you can go back and say it didn't happen? No. They're out having a good time. They don't care you're mad. So guess who it hurts?

So here's what happens. When we stay angry at people, we're actually giving them permission to hurt us long-term. So then they just keep hurting us and keep hurting us and keep hurting us, so really when God tells us to forgive, I'll be honest with you, I don't think it's nearly as much for our enemy as it is for us. 'Cause sometimes, I forgive people that don't even think they did anything. I would at least like to have a little repentance and, "I'm sorry and I treated you wrong". But God will have us forgive people even if they don't give us that. And that's really tough.