Joseph Prince - Where You Are In God's Prophetic Timetable 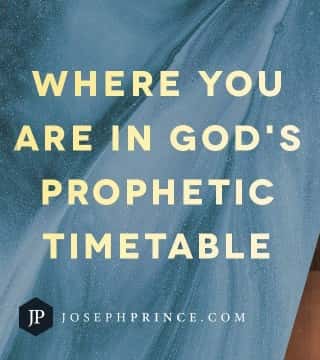 Anyway, you all know the story of Joseph very well. He became the bread of life to a lost, dying, crying, sighing world. Amen. Who benefited from Joseph's wisdom? Who did Joseph actually save? The people of the world. Egyptians! So in a sense, for 2000 years, the Jewish Messiah has become the bread of life to a predominantly, look around you, Gentile world. But Joseph never forgot his father's house. He never forgot Israel. He never forgot his brothers. And today they think just when the brother saw Him, they thought with his Johnny Depp makeup and all, they thought that he's a Gentile, just like Jewish people today. They think of Jesus like a Gentile. "He's a Gentile Jew". You know? You can understand that. "He's a Jew for the Gentiles. He's not a part of us".

For 2000 years, where are we now, prophetically speaking? Where are we now? We're coming to that place, finally, there’s a famine. For 2000 years, even though God is still merciful to the nation of Israel, you know the sufferings they went through. And they never came to a place: "Maybe it's because we sold our brother". But they're coming to that place. They're coming to that place. So after for a while, when there was famine, Jacob sent his sons to Egypt and Joseph saw them. Amen. And the Bible says, you can read the story yourself, you know the story. I'm coming to the core of what I want to share. Joseph actually said to them: "You are spies". Now, what does he want? He actually spoke strangely to them in such a way that he wants them to see their sin. Before he can save them, right? To see whether there's a change in them because they didn't care about how their father felt. The father loved Joseph. When they went back, they deceived the father. They didn't care if the father died. He wants to know whether there's any change of heart, whether they still care about their father, whether they still care. Is there a change of heart, alright?

So he spoke roughly to them and the Bible says: "He bound Simeon". He says: "You know something? To prove you're not spies, you mentioned to me you have a youngest brother. Go bring your youngest brother here. There'll be no more bread until Benjamin stands in front of me", amen, "Your brother won't be released. Simeon". Simeon, one of the brothers. Simeon, his name means "hearing". So today, Israel's hearing is locked up. You know the greatest commandment of all in Israel, the greatest commandment of the Old Testament. Y'all say: "Thou shall love the Lord thy God," right? But actually Jesus did not say that. He started by saying: "Hear O Israel, the Lord our God is one Lord. You shall love God with all your heart". It starts with: "Hear". "Shimon" or "Shema Israel. Shema Israel. Eloheinu Echad". God is one God and the word "echad" is actually not a single unity but actually it's a compound unity. Three in one. That's in their Hebrew Bible! The triune God. I'm just getting started, okay? "So there's no more bread until Benjamin comes in front of me".

Now, who is Benjamin? Benjamin has the same mother as Joseph. Now I want you all to see where you are at in God's economy of things, in these last days. Why God is raising this grace generation? Amen. I want you to see where you are at. It is not by chance that we are talking about grace. And grace has taken root all over the world so much so, that the devil is trying to bring in pseudo grace, counterfeit grace. Amen. So you know what? All over the world, God is raising a Benjamin Generation. Amen. Leah and Rachel. Now the Bible says: "Leah's eyes were delicate". The King James says: "Weak-eyed. Rachel was beautiful of form and appearance". These are two sisters that married Jacob. So Jacob is the father, okay? But Leah produced sons and all the sons are a picture of bondage. Then Rachel also had handmaidens. Handmaids. That means they are also producing bondage. Rachel could not conceive for a while, am I right?

So all the other sons, I'm speaking prophetically now, in terms of typology, they actually represent the law. 10 of them. 10 represents the law. Two sons born of the same mother. Who is that son? The first one. Rachel finally conceived. She gave birth to Joseph and when she gave birth to Joseph, she had faith. She said: "His name is Joseph, which means God will add to me another son". So she prophesied already, the coming of Benjamin. When Jesus came into this world, God already knew that. God was looking forward to the Benjamin Generation. God was looking forward for you, for such a time as this. I know it took a long time for Benjamin to come. It took a long time, it took a long time for this Benjamin Generation but they are here! The youngest of all the brothers is Benjamin. Amen. And that's why this Benjamin Generation is made up of a lot of young people, I'm telling you. Amen. And young-looking people! Amen.

Pastor Mark is so happy. Hallelujah! Yes, with man it's impossible, with God all things are possible. Amen? All the movements in church history, the church has called the movement: "Joshua Generation", the prophetic move, the "Prophetic Generation", the "Word of Faith Generation", this generation, that generation. Finally, God says: "No more, the church won't name it anymore". The mother (Rachel) was the one that named as she was dying, alright? "And so it was, as Rachel's soul was departing (for she died) that she called her son's name," what? She called his name, what? "Ben-Oni". "Ben" means "son". "Oni" means "sorrow". "Ben-Oni. But his father called him Benjamin". So for so long, the woman, the mother, the church has named the movement. This is the first time the Father says: "I will name this generation. Benjamin, are you there? Benjamin, you are not the son of My sorrow. You are the son of My right hand, the son of prosperity, the son of power, the son of My grace, the son of My righteousness for I've upheld you with the right hand of My righteousness"!

Do you think there's a difference in this move? What do you think? Do you think there's a difference? I reckon! You better believe it! You better believe it! We are that generation! Amen. So finally, Simeon was locked up right? By the way, when Jesus was born, a man came, called Simeon. Remember? And he said he's a very old man and he says: "My eyes have seen Your salvation". Now he's speaking Hebrew, right? So his prayer is: "My eyes have seen Your Yeshua. Now let Your servant depart in peace". So he represents: "Shema Israel, Adonai Eloheinu Adonai Echad". Hear O Israel. Hear, "Shema" is the first word. "Hear O Israel, the Lord your God is one Lord".

Even the law saw Jesus and the law says to the Father: "I can now depart". Amen. Even the law was happy to see Jesus Because the law doesn't want to condemn but it cannot bend. To be the law, you cannot bend. You cannot help. To be the law, you have got to be unbending, inflexible. So the law was very glad to see Jesus and then after the law says: "Let me depart". Do you know who came in? Hannah came in! Hannah means what? Grace! And Grace opened her mouth and said: "Come see this Child! To all who are looking for redemption, this Child! He's the One! He's the One"! Amen.