Joseph Prince - How Much Longer, God? 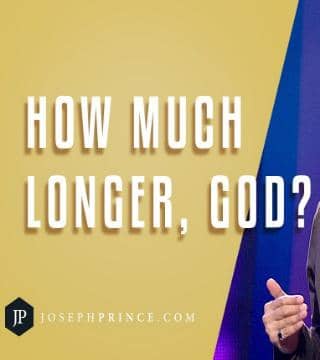 This excerpt is from: "Why Does God Allow Delays?" (23 Feb 2014)
Today, I want to share with you about delay. If you are asking: "Pastor, I have been praying, I’ve been praying for this, and I know God wants me to have this, it’s in His Word. You have preached on it Pastor, and I’ve seen it in the Word, but where is the manifestation"? David sometimes says: "Has God forgotten His mercies? Why is He so slow? Have You forgotten me"? Well Abraham felt that way too, isn’t it? Abraham, when God called Abraham out of Ur of the Chaldeans, which is the present day Babylon, Iraq. When God called him out. "I’ll show you a land". God says: "And I’ll make of you," What? "A great nation". How can you have a nation without posterity, right? So God promised him, from that day, God promised him that God will make him a great nation when he didn’t even have a baby, and Sarah had always been barren, even in her young age. And now she is 65, at that time, and he was 75 when he departed to go to the land of Canaan.

Well, the Lord told him... he wasn’t perfect, was he? But God called him. And think about it. If you were in Abraham’s shoes, you waited year after year for your manifestation. God Almighty appeared to you! In fact, Stephen, in his address in Acts 7, in the book of Acts, he said this: "The God of glory". I like that. "The God of glory appeared to our father Abraham". When God appeared, God appeared to Abraham as the God of glory. I’m sure there was an amazing light infusing out of Him, His being, His presence, when God said: "I’ll make of you a great nation". And yet, month after month, Sarah would cry. Weeks became months, months became years, years became a decade. Even a decade passed and all these things going on. Please, I’m talking about you and you believing God, and you asking the question: "Why"? Because you are special. Because Abraham was special. Abraham was special.

He looked around, He looked at the Philistines, Philistines' wives walking around, another one walking with a wheelbarrow. He looked around, everywhere he went, every city he went. He went to Egypt, alright? Egyptian women walking around, being carried, left and right by servants or slaves because they were so pregnant. Some of them with triplets, quadruplets, sextuplets, and they are just so full. And these are heathens, and Abraham saw all these and Abraham says: "The God of glory appeared to me". And it’s not recorded for us how many times Sarah would tell him: "What’s happening, Abraham? Are we missing God"?

Now, I want to tell you something about the devil. The devil will turn your times of delay, alright, of non-manifestation into times of questioning God. If your faith is such that you say: "I know my God. Though He slay me like Job, yet will I trust Him". Alright? If your faith is like that, then he will do the other approach. "Something wrong with you then. There must be some sin in your life. There must be something you did, maybe in the past…" Alright? "That is now haunting you, that is now affecting this whole thing". "You know that there’s nothing wrong with God, right? There’s something wrong with you. There's something wrong with your wife. There's something wrong with your parents". I mean, he will accuse you at the drop of a hat! Every time something happens like this, he will do his very best to make sure you come under condemnation, because condemnation is something that will cause you to repeat that behaviour. Is it because of the wrong decisions that the baby was delayed? No. God was going to give him a revelation of Himself that all the heathen woman who walked around pregnant will never know. I find that.

Ladies, who are believing God for a baby, let me tell you this. I find that in the Bible, ladies who are barren, when they believe God, and some of them long delays before they conceived. They always bring forth champions. They always bring forth champions. Sarah brought forth Isaac. Amen. Manoah brought forth Samson, in their old age. Amen. Zechariah, his wife Elizabeth, the first two names you find in the New Testament. Zechariah or "Zakar-yah". "Zakar" means "Remember". God, Yahweh remembers. "Elizabeth" or "Eli-she-va". Means God’s promise. God remembers His promise and brought forth "Grace" or "John" in their old age. When the child is born out of faith, now, the rest of them, they just get together, boom. Imagine a Philistine passing by: "Why don’t you call upon your God"? "Pray to your God, pray to your God, huh"? How do you think Abraham felt? Abraham looked around and Abraham is wondering: "They are getting manifestations, or are they? Abraham, you do not know, you don’t see their hearts. Yes, they have the physical thing but that child is not a champion. Your child will be". I said: "Your child will be"! When the child comes, wow, what a champion! Amen!

You know how long Abraham waited? You know how long Abraham waited until finally Isaac came? And during this time, do you know what he did? He did his best, he listened to his wife. The wife says: "Looks like God doesn’t want me to bear anymore," I mean she literally said: "God has restrained me from bearing, so why not go to my servant girl"? Abraham says: "Okay". Abraham went to the servant girl and then got Ishmael from the servant girl. After that you know, Sarah came complaining because now Hagar is proud. The maiden girl who got pregnant by her master Abraham is proud, looking at her mistress, saying: "Mmhmm". Alright and now Sarah came to Abraham and said: "It’s your fault, my wrong be on you". And Abraham said: "Now you blame me"! Imagine all the quarrel they went through, all the while Abraham is Saying: "Where is Your promise, God? Where is Your promise? What happened to Your promise, Lord"?

Are you in that place? You know how long he waited? 24 years. 24 years! "24 years, just waiting for a chance, to tell her how I love her and maybe get a second glance, but now I got to get used to not living next door to Alice. 24 years..". That’s an old song by the way. You all wouldn’t know, this generation, alright, I sound so young, praise God. Anyway, 24 years, that’s how long he waited. Poor old Abe. But when the boy came, hallelujah, he was a champ! And during this time, just before the boy came, you know what God did? You all know the story. He went down to this place in a Philistine area, and the Abimelech, which is the title of the Philistine king, saw Sarah, and this time Sarah was about 90 years old. In other words, if God makes you wait, God will, God is a God Who restores. If God makes you wait, God will keep you young. If God makes you wait, God will do something to your body, that other women do not have. Because when she was 90 years old, something happened to Sarah’s body. She was beautiful, that even a heathen king, and don’t forget heathen kings go by their eyesight. They have no spiritual discernment.

So God literally, changed the physical beauty of Sarah, make her young again. Amen. And there was something else that the devil accused them of. Look, Abraham prayed for what? For God to heal Abimelech in which area? "For the Lord had closed up all the wombs of the house of Abimelech". He’s praying for open wombs when his wife is not even pregnant. For years. So, the devil will try to make you feel like a hypocrite. But therein lies God’s wisdom. When you don’t have the manifestation, find somewhere and bless someone else with it. Pray for someone else, pray for a blessing on someone. See what happened in the next verse, the next chapter. I put it down there because it’s all one continuous flow.

The next chapter says: "And the Lord visited Sarah as He had said, and the Lord did for Sarah as He had spoken". And why is it that this verse comes right after he prayed for the open wombs? Pray tell me. Why do you think that is so? God wants you to know. Do not stop praying for the sick, even when you are sick. Do not stop ministering to people even when you don’t have that manifestation. The devil will tell you: "How can you? You’re a hypocrite". Are you listening, people? 24 years. He started praying. I do not know whether God used him to pray for anybody else, but it’s amazing, maybe he was under accusation, I do not know. But one thing I do know, when he started praying for open wombs, his wife’s womb opened. Sometimes we are so self-absorbed. My healing, my healing, my manifestation, my child’s manifestation, my, my, my family, my family, that God wants you to break out of that self-occupation, and start getting involved in praying for other people.

If you are in a clinic, start praying for people that you see around you. Pray for that child, pray for that lady, pray for that man, start praying, amen? And all of a sudden, you’ll find your own stress level, your worry level, anxiety level just drops. Start praying for others. And God turned the captivity of Job when he prayed for his friends. What the devil wants to tell you is that: "It’s your fault! Something is happening because of this delay. It’s your fault". No, my friend. Listen. In the Old Testament even, alright, like Abraham’s story, it wasn’t because of Abraham’s sin. Are you listening? God waited until Abraham could not, and then when Isaac came, all the glory goes to God.

God waited until Abraham could not, but the thing is this, there was a lesson. When Abraham finally received his manifestation, listen. God told him, "I’ll multiply your seed as the stars of the heaven, and as the sand on the seashore". And today, when you look around, Look! All these are the seed of Abraham! Abraham has more seeds than all those Egyptian women walking around. Amen. All the Philistine women walking around pregnant. Today, we are called sons of Abraham! Best of all, Abraham started learning about who God is, His wonderful person, that all these other people, never got to know. Sometimes, in the delay is a revelation. And because He loves you, He delays, so that you’ll have a revelation that others don’t have. Those heathen never knew the revelation that Abraham had. Isn’t that wonderful?