John Gray - While You Were Sleeping 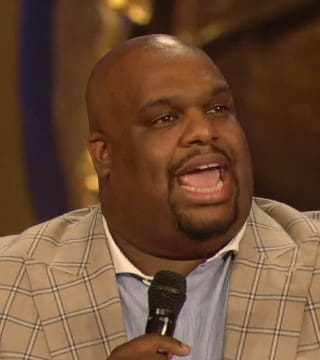 I want you to go to Psalm 121. We gonna start there tonight. How many people have been a part of the destiny series? Praise God, we may visit that on another week but the Lord shifted me this week and we going in another direction. The Holy Spirit put something on my heart and I want to be obedient to the Lord to continue to preach not what my agenda is but what his agenda is for his people.

I was speaking with pastor Lisa a few days ago and she asked me this really, like profound question and I'd never talked to anybody about it because I was like, maybe it's just me or maybe I'm crazy but we were talking and she says, has God ever given you a song in your sleep? She said have you ever woke up singing something in your spirit? Anybody else ever? You can't really remember all the time. It's like a melody off in the distance. And there's something in there like you're asleep and you woke up and your spirit was singing. And I said yes, that happened to me, that happens to me, it doesn't happen often but it happens to me.

I thought I was crazy so I didn't tell nobody. I was like, I never heard this song in my life but it's speaking to my spirit. Isn't it funny that even though you're asleep something else is still stirring? Sleep may refresh your body but it's also restoring your soul. And I want you to go to Psalm 121 because sleep is a very human phenomenon and because many of us see God through the lens of our own understanding and our own limitations we often see God as a bigger version of a human being.

A lot of times we see God as a man with a beard with white hair and my problem with that is, if he's got white hair then that means he probably aged. But God cannot age, because age is a function of time and he does not dwell in time. He created time but he lives in eternity. And we get these ideas about God and we assume that he is somehow like us when in fact he is altogether not like us even though we came from him. We have his spirit but he is altogether different. He is not created, he is Creator. He does not need to be sustained by anything outside of himself. He is the great I am, we serve a mighty God. He answers to no-one and he is afraid of not one thing and he bows down to nothing but everything bows down to him.

We serve a mighty God and I feel like praising our mighty God on a Wednesday night. Our God reigns and he is great and greatly to be praised. I don't know what your situation is but it is not bigger than the God who created you. Have you ever had a song in the night? Psalm 121. Psalm 121 says I will lift up my eyes to the hills, from whence come my help? My help comes from the Lord. Who made heaven and earth. He will not allow your foot to be moved. He who keeps you will not slumber. Hallelujah! Behold, he who keeps Israel, shall neither slumber nor sleep. The Lord is your keeper. The Lord is your shade at your right hand.

I want to draw your attention to verse four, that behold he who keeps Israel and therefor those of us who are covenant bound to God, to the promise of Abraham which includes all of those who believe that Jesus Christ is the son of the living God, so what's being said here, still applies to you. That God shall neither slumber nor sleep. The word slumber in Hebrew means to be drowsy or to nod off. God doesn't get sleepy. He doesn't nod off in the chair of your destiny and he doesn't sleep. He doesn't need rest.

I need you to understand that what happened in Genesis when God was creating the heavens and the earth that the seventh day was made as an example for us. It was not for him. God was not like whew, I sure am tired, I been working six days, I need to take a break. God has never sweat. God does not get tired. He did not rest because he was tired. He rested because he was finished. I'm so glad that God does not slumber or sleep, because I need to know that somebody's watching while I am asleep. I don't know about you but sometimes it's hard to get rest.

See a year ago today, my baby boy had surgery because he couldn't sleep, he would struggle. He couldn't get his breath and for 70 times an hour, for more than ten seconds at a time, he would stop breathing. Over and over for month after month. Six, seven, eight months, losing oxygen at critical times of his development. He was losing oxygen and there was nothing I could do about it. Nothing his mom could do about it and there were nights when I would hold my son while he would try to sleep and I would catch him not breathing and I would shake him and imagine the fear that comes over a parent because you are afraid to go to sleep because you don't know whether or not your baby's going to wake up in the morning.

Oh but God! I'm trying to keep it together. Oh but God had another plan. I know we might have people listening on sirius xm and you watching online, you all got to forgive me. Let me rush past this because if I start shouting they gonna say I'm crazy. But I need you to understand that the enemy wanted to take him out. He wanted to kill my legacy. He wanted to break the heart of his mother and his father, there are some things that it's almost impossible to recover from and I can imagine losing a baby is one of them and I was struck with fear. Please don't judge me because I was afraid. But somehow through my drowsy tears, while I slept God was awake.

I bet you did what I did. Jesus, Jesus, Jesus, Jesus. Anybody ever called on the name like you. And finally you were able to... That devil is a lie, he will mess with your sleep because sleep is the most vulnerable state and the enemy wants to attack you at your most vulnerable place. He wants to attack you in your rest because if he can't get you while you're awake, lets get you when you're at rest. That's why he wants to keep you busy, he always wants to keep you searching. He always wants to keep you afraid because if you're rooted in fear, you always looking over your shoulder and trying to figure out what's coming next and you can never rest and rest is a key to trusting God.

Have you ever been lost? Ever got in the car and you were heading somewhere and all of a sudden what's on the paper is not what you see in front of you? Has GPS ever taken you the wrong way? I'm so sick of that lady. Turn left at the light. I did! Turn again. Re-calculating route.

I know we're in church and it's like well I kept my joy. I would love to say that that's the answer all the time but there have been times when my hope was on e and the orange light was flashing and my directions were taking me in the wrong place and my emotions and the decisions that I made caused me to be further away from God's intended destination point. Have you ever been lost? What's worse, have you ever been lost because of something you did? If it's somebody else's fault now I got a reason to be angry. There's a whole, you can't get mad, I mean you can get mad at yourself but you not gonna beat yourself up the same way as if it was somebody on the outside.

Have you ever been lost because of your own decisions? Sin creeps in and causes you to be misdirected, misguided lust masquerading as love and now you've given a part of yourself to someone who didn't deserve it and this opportunity, it looked like a God thing but it was masked. It was all the way designed to take you out and now you're lost or God in his mercy whispered in your ear, but you ignored it and you still went your own way and now you're lost and stuck.

This message is for those who have struggled through your sleep. You've been waking up at 03:18 and 04:24 and 02:56 and I'm talking to somebody, I know I'm not the only one that somehow in the middle of the night you're wide awake and you were exhausted but now you can't get back to sleep. I need you to know that everybody has battles. Everybody struggles. You're not struggling alone and I don't want you to take your struggles to bed with you tonight. They end right here. I wish somebody would have faith for this moment. Anybody who needed peace tonight. Anybody who needed rest tonight. Anybody who needed a clear word tonight.

These next few moments are for you. I want you to know that God wants to heal you from the inside out. I want you to know that God is doing something so significant that you gonna be able to smile again and dream again and laugh again and live again. There was nothing worse than watching my son struggle for breath. I couldn't sleep for the better part of two years, we didn't really sleep all night because we were so worried about our boy. Has anything ever kept you up at night? I just wonder, is anybody in here ever lost sleep over a situation? Right there? Anybody else? Then Psalm 121 was for you, because God is saying I need you to sleep.

One of us needs to sleep and it ain't me. Oh I felt the Holy Ghost. I know it's funny but it's true. I know because sometimes we try to work it out. We try to figure it out and God just said, if you could just... I'm just, God, listen listen listen listen. You so sleepy, you sound like you're drunk. You might even have had a little taste before bed butb listen, listen, listen it just, I tried to help you help me. Anybody ever prayed and was asleep at the same time. God, I'm here I love you, I'm just... I want you to know I believe Lord... Hallelujah.

Hey, Holy Ghost! I know I'm not the only one that's been worried about something in the middle of the night and you've been talking to God about it. Have you ever been talking to God and just fell asleep? While you were talking and it was an important thing, I want you to know that that's a beautiful thing that's in Psalms 63 and six. I love it. You need to write this one down, it will bless you real good. Psalm 63:6 says: when I remember you on my bed I meditate on you in the night watches. Instead of losing sleep, praise him as you go to sleep.