John Gray - It's Your Turn 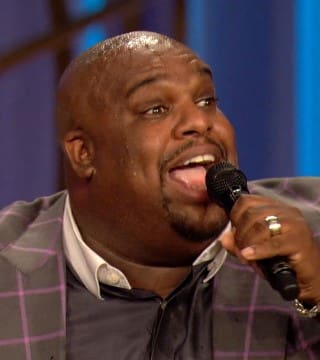 Some of us have been trained by other people's blessings. Some of us have been trained in patience by other people's miracles. And I don't know about you, but I've seen it over and over in God's character. He always saves the best for last. That's just for anybody who's been waiting. One, two, three, four, five, anybody at home? You might as well stand up unless you're driving, don't stand up. Anybody else? He always saves his best for last. God loves a dramatic moment.

I need you to understand that everybody else around you got blessed, praise God, and I'm happy for them, but I just came to announce it's your turn. Here's what's crazy, have you ever been somebody else's turn? Like you end up being their miracle? Like your cousin, she needed 46 dollars, and you gave it. Thank you, I love you! But it was her turn for the breakthrough. Have you ever been the one God used to be a blessing to somebody else?

Sometimes when you're the blessing for other people, they start taking advantage of you. I got any witnesses in here, you know what I'm talking about? It's like they don't even go after God, they don't even pray. I'm just going to you. Listen. I know God speak to you, so listen. Let me just hold something until next week. I give you a check, hold the check and then put it in in two weeks, two Tuesdays from tomorrow, and then call me before you deposit it. Deposit it after four so that way it go on the next day's business.

The Bible says a certain woman, everybody say a certain woman. This is very important. I want you to remember that, certain woman. I'm gonna go to John chapter 5. You don't have to go there but I'm gonna go there. John 5:5-9, there's another story about somebody that had been waiting a long time, and all of a sudden out of the blue, suddenly, without warning, without provocation, without asking, it was their turn and this is the prophetic moment that you are in. You have not even prayed for this particular thing for a while.

In fact it's so far back in your memory, you almost forgot about it and God's gonna bring it back and with that, he's gonna be like, remember when you prayed for that twelve years ago, remember when you prayed for that nine years ago, remember when you cried over that eight years ago. Here, here and here. And I'm bringing it now because you're ready for it now. You weren't ready for it then. You thought you were, but the reality is you were prophetic, you knew you were supposed to have it but your character hadn't lined up with your spirit, so I love you too much to give you what you want before you're able to handle it. Praise break. Praise break. Five, four, three, two.

John 5 says, "Now a certain man was there who had an infirmity thirty-eight years. When Jesus saw him lying there, and knew that he already had been in that condition a long time, he said to him, “do you want to be made well?” the sick man answered him, “sir, I have no man to put me into the pool when the water is stirred up: but while I am coming, another steps down before me”". Swing low, whoa is me. "Jesus said to him, “rise, take up your bed and walk”". And later that day, a few hours later, two weeks went by, Dennis. Immediately!

I've gone to the doctors, they played me, I spent all my money 'cause I had it to spend, she was a certain woman. She wasn't just some beggar, she had a reputation. She had a name. She was a certain woman. People knew who she was, but she was tired of being whispered about. I wonder what's wrong with her. She ain't been right for twelve years, girl. Hey girl! Call me. Well you can't call me 'cause we don't have phones yet, but write on a tablet. It said she got worse to the point that she was at the end of her rope.

Now you really aren't hungry for a miracle until you're at the end of your rope. Now that was a sound of somebody at the end of their rope. See the thing in church now, the cool thing is to maintain our proper posture and to maintain our decorum because in our westernized culture and our civilized society, it's more appropo and more respectable to come in and maintain a certain facade and a certain level of regularity, and we don't want people to assume that we really need anything, so we kind of come in and wave our hands, we sing our song, but when you are a certain woman and a certain man, you don't care what people think.

She was a certain woman. Even though she was in a broken moment, she was still certain of who she was and what she carried and certain of who she needed to pursue. But notice how she approached Jesus. The Bible says that when she saw Jesus, she said if I can just touch the hem of his garment. Now here's what's deep, there is no law, that's not in Exodus, that's not in Leviticus, that wasn't something God wrote down to Moses, when thou toucheth a high priest, they must cometh to him by bowing down and touching his hemmeth of his garmenteth.

Now, this will make you cry. He cries and asks for pastor Joel, and he makes me pull up Lakewood on my website and he'll watch a whole sermon on my lap of pastor Joel, and this is what he says, pastor Joel, Jesus. He equates Jesus with pastor Joel because he understands the Word of God. Now how does a two year old want Jesus, and if I don't give it to him, he cries. I'm not gonna let my two year old be more desperate for Jesus than me, and when my son wants something real bad, he'll... Daddy! But some of y'all still want to act like I want to keep it together, I don't want people to, but every now and then you just need to, um, I'm in trouble. Um, it's been twelve years. Um, I need a miracle now. They think I'm crazy, they're whispering about me, but I don't care!

Here's what I love. If you want a miracle you need to get in proper position. She didn't get in Jesus' face to confront him. Excuse me, I heard about you. Um, I'm in a little trouble and I need you to do something now. I know his daughter sick, whatever, she about to die, hello, I'm right here, I'm in your face, can you see me? Can you see me? She didn't confront him. She got behind him. She didn't walk next to him and try to bargain with him. Hey Jesus, I got a great proposition for you. I know you're going down there, a little girl about to die, but if you act now, if you heal me, I'll tell everybody. I'm just saying, I'll be your spokesperson all over Jerusalem. I'm telling you right now, just heal me, put your hands on me.

No. She didn't walk in front of him, she didn't confront him, didn't walk next to him. She got right behind him. Why? Posture of humility. A posture of discipleship. A posture of faith. He doesn't have to see me to know what I need. Am I helping anybody? I got to hurry. I was singing and stuff and praising and took all my time up. I can't take my time. It's my pastor's church. Touched the hem of his garment. He said ah, finally somebody who did it right. Now here's what's crazy. She was unclean. We know the story. By law, she wasn't even supposed to be outside. By law, she should be no where near the high priest. By law. But that's why Jesus is the fulfillment of the law.

So even though it was illegal, grace covered her because... Help me. Here she is, I know I shouldn't even face you, that's why I'm gonna stand behind you. In fact, I'm not even supposed to be talking to you. By law, I should be no where near you, but you're all I have left. I don't even want to touch your skin. If I could just touch what you're wearing. I don't even need the holy holies, let me just touch the curtain. Jesus said yeah, power just left 'cause somebody approached me right. They didn't let the law keep them from coming to grace.

I'm telling you, if you serve Lord and honor him, and reap and tithe, and you give offering, one day whenever you least expect it, all the sudden, out of the blue, without asking, God is gonna bring to you what you could not bring for yourself. He's gonna cancel debts, he's gonna meet you and exceed your need. I'm telling you what I know because I'm in the middle of it! It's your turn. After this woman got her miracle, a certain woman got her miracle, Jairus whose name means whom God enlightens. He had a revelation, he was a part of the synagogue so he knew the law, but the law wasn't saving his daughter. The law wasn't healing his daughter.

And he said listen, the law's not working. My religion is not working. All of my tradition is not working. I need grace to come to my house. Jesus said I'm coming and as grace is coming, the law shows up. She's dead. Forget it. Jesus said I know you, law. By law her breath has stopped but since I am the breath of life, I gotta go, and I feel like shouting, and I will on my way home. But Jesus said be careful what you say next, Jairus. Don't doubt. Only believe.

I feel the Holy Ghost. Does anybody hear what I'm saying? It's your turn. Listen to me. This is my final point, when miracles happen, they normally don't come alone. I need you to know when a miracle breaks out, there's normally another one that's gonna hit somebody else. Here was a woman who got healed twelve years, the blood flow, and God stopped it through his son. Then the little girl twelve years, her blood flow stopped and Jesus started it. Both of them had an issue of blood. One was bleeding too much, the other one's blood stopped flowing. But since it's his blood that pays for sin, he could stop her blood and start hers, stop one in one and start one in the other.

Miracles, if there's one person on your row that can believe. There's one. Promotion now. Debt cancellation now. New job now. You better start taking care of yourself, you ain't gonna be single much longer. That man's gonna spot you in this season. He's gonna see the favor on your life and say I got to marry her. I can't mess around because the hand of God is on her, and if I find a wife, I get favor. And I've got a good thing, I better get that good thing before somebody else get my favor. Honey, you are in position. You better believe God!