Jentezen Franklin - How To Encourage Yourself 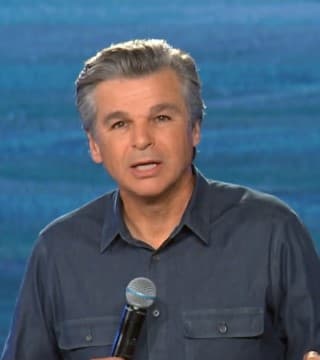 I don't have time just to go through and read all the Bible that I wanna read. But boy, if you want something that will bless your life, read this week 1 Samuel 30. I'm gonna skip down to the part of verse 6. "Now David was greatly distressed, for the people spoke of stoning him because of the soul of all the people. Because the soul of all the people were grieved, and everyone was grieving for their sons and their daughters. But David encouraged himself in the Lord his God".

And then he inquired, verse 8 says, of the Lord, saying shall I pursue this enemy? Shall I overtake them if I pursue them? And listen to what God told him. He said you shall surely overtake them and, without fail, you shall recover it all. You're gonna recover it all, David. But something's gotta happen before that in verse 5, actually, the end of verse 6. He said you gotta encourage yourself. But what I'm going to do is I'm going to bring a power on your life that enables you to recover it all. And then later in the story, and I didn't have time to read it, but you can find it. The Bible said he didn't just recover it all, but he recovered it all and spoils besides. And this was called David's spoils.

S, P, O, I, L, S. It's really amazing that he didn't just go into this crisis, losing and get it back, but he got back more than what he lost. And it was called David's spoils, the scripture said. You know, life can throw you some curves. And it's not just the things that you see coming, but sometimes it's the things that you didn't see coming that hit you outta nowhere. That set you back in such a way that it seems like you can't get over it. Well, that's the situation that David was in in 1 Samuel 30. David had 600 mighty men, and I'm telling you, they were on a roll, we would say. They were winning, and winning, and winning. Every battle, every city.

Listen. For three months, day after day, they conquered territory. They conquered kingdoms. And they were winning, and winning, and winning. And after three months of fighting, they were so looking forward to go home, and see their families, and see their children, and see all that they were fighting for. You know, to hold in their arms their families, and to rest in their homes. And all of a sudden, when they travel back, after they traveled many, many miles, they see smoke. They see a pillar of smoke, and it's coming from the direction of their hometown. And they speed on their horses, trying to get there as quick as they can.

And when they get there, it is an astonishing dark thing that they see. Their city is burned down to the ground. Not only that, but all of their homes. David's home was burned completely to the ground. The Amalekites had invaded. And while they were out dealing with this, and dealing with that, and dealing with this, they never saw the enemy attacking their homes and their families. And they found themselves in a situation where their children had been kidnapped and enslaved by the Amalekites. Their wives had been taken.

The Bible said David's wife was gone. His children was gone. All the mighty men of Israel, their families. Their homes burned to the ground. And they began to question. How could we be winning so much out here Have you ever had that season in your life yet where you have two things going on at the same time in your home? Like a miracle and a mistake? Like Abraham and Sarah? You know, they had Ishmael coming up in their home, the mistake. And they had Isaac coming up in their home. And it's like you've got all, you can't believe that it was doing so good area of your life. That was the situation that David found himself in. And he found himself in a place where he began to get overwhelmed because he didn't see this problem coming.

And I think already, before this virus hit, that many people's plate was so full. And they had so much. And we were winning, and we were conquering, but we really had our plates so full. And then here comes one more big thing that we didn't see coming. And it's almost, it feels like that life has just really, people's lives have been burned down. And have you ever had life, just feel like people in your life burn you? You know, you burn down your own life, and it just feels like you've lost everything. And the scripture said that they began to weep in verse 4. They wept until they could weep no more.

And the thing that touched me about this, and I really wanna take a moment. Lean in now. This is where I wanna be. The thing that touched me about this is they wept until they couldn't weep anymore. These are mighty men. These are warriors. They are not weak people. These are not people who, you know, emotionally are unstable. These are killers. These are warriors. But when they saw their homes burned down, when they saw their families gone. When I think of a home, I think of a place of rest. I think of a place of retreat. I think of a place of I can go and recharge my battery. And I believe what the enemy is wanting to do through all of this crisis, it's not that they were tired physically as much as something broke. It's the straw that broke the camel's back. Something broke mentally, and emotionally they were tired.

And I believe that's what the enemy's wanting to do. It's not that you may be physically as tired, because you probably been getting more rest laying around the house. But emotionally, you feel like it's piled on. Emotionally you feel like it's one thing after another. And now, on top of that, the uncertainty of finances, and jobs. And what am I gonna do with these children? And what are we gonna do about their education? And what are we going to do, and it just feels like it's so much that's out of our control.

And notice what they did. They lifted up their voice, and they wept. The people who were with David wept. The mighty men and David wept until they had no more power to weep. When you're in distress, that's one thing. But when all the people on your team are going through the same situation. And they all lifted their voice, and they wept. And many, you know, live and perceive Christianity to be something that is in denial. They think Christianity is living in denial. But I love the fact that it says they wept.

Have you ever met these super-spiritual Christians that don't feel anything? I'm not that way. I'm not that spiritual. I'll be honest. I've felt depression trying to come on me during the middle of this. I've felt dark days. I've felt the uncertainty of the future. I've felt it. And I know many of you are feeling it. I think of the single mother sitting there at home right now. And, you know, you've had three kids in the house with you for four or five weeks now, and you don't know. And you're scared to death to go back to work because you're afraid. I could lose my health, and I could give this to my children. And I don't know how you manage it. I don't know how you do it. My heart goes out to you today.

Well, Pastor Jentezen, how do I encourage myself in the Lord? I've lost my job. How do I encourage myself? I don't have the choir. I don't have the preacher. I don't have anybody. I'm sitting here looking at this in my pajamas, and I'm looking at a screen. You are the one I'm preaching to. He encouraged himself in the Lord. Lemme give you three quick things you do to encourage yourself in the Lord. Number one, rehearse your past victories. Rehearse your past victories. David started going back in his mind. He didn't have nobody to encourage him. Didn't have any family. They were kidnapped. Didn't have a house to go to. He was homeless. All his silver, all his money had been stolen. He was broke, so he didn't have any encouragement in his resources. He turned to his friends, and his friends didn't have his back. They were ready to throw stones.

"I remember when Goliath came out on that field. And I remember all I had was a sling shot and five stones. But I slew him because God was with me".

And as you enter into this, I want you to hear what happened. For the Bible said he prayed, David did. And he said God, should I pursue? Should I believe that even though I've lost a lot, you can restore it? My family. My house is burned. My finances are gone. Is it over? And God said, you shall pursue. Listen. For you shall recover it all. And that's what I came in here with today.

Is I believe that we're about to recover it all in this nation. We're about to recover it all in our businesses, and in our families, and in our church. And spoils besides. In other words, we're not just gonna break even and get back what the enemy stole. But ol' David, when he got down to the Amalekites and saw 'em partying and having a big time, you oughtta read it. They were having a party in the middle of the valley, and had his kids tied up, and had all of his gold, and had eaten all of his stuff, and enjoying themselves.

And the Bible said that David got angry, and he attacked. And he went to the enemy's camp. And after he took all of his stuff back, he turned around, and he noticed... well, my goodness. They have sheep. They have cows. They have gold. They have stuff that they've accumulated, and they don't need it anymore 'cause I just wiped 'em out. And so he said, I'm gonna take that back. I'm not just gonna get back what the enemy has stolen, but I'm going to recover it all. And I really believe that we're going to see in this nation, and in the world, and in your life, and in your business, and in your finances, and in your family, you shall recover it all and spoils besides.