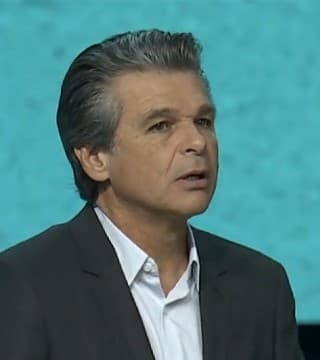 I want you to focus in for just a moment on verse 20. For if our heart condemns us, God is greater than our heart, and He knows all things. I wanna preach on guilt-free living. Guilt, condemnation, a sense of failure will gnaw at you if you allow it. But in Jeremiah 17:9, the Bible said that your heart is deceitfully wicked, and you are not to believe the report your heart constantly tells you about your relationship with God. Your heart can only register right or wrong. Your heart knows when you do right and you do wrong, and you get an emotion and a feeling about it.

And that's good. But your heart is not the final authority over your life. It can only register right or wrong. It can only register you've been good or you've been bad. But I know a higher court, according to this text. And it said if our heart condemns us, there is one who is greater than our heart, and He knows all things. And it's a powerful thing when you understand that the scripture I just read - I used to read it and think, you know, if our heart condemns us, God is even greater than our heart. His standard is even higher than our heart, and He knows all things.

And that's not what that verse means. This is not a verse of condemnation. This is a verse of encouragement. That even if your own heart is registering to you that you have done wrong, God, who saved you when you were a sinner, still loves you when you're a son or a daughter that has done wrong. And He says this is not some loose message where you live wild and crazy. That's not what I'm preaching. But I am preaching the gospel of Jesus Christ. And if your heart condemns you, God is greater than that voice and that heart that condemns you, and He knows all things. He knows you want to please Him ultimately. Your heart says bad. Your heart says hypocrite. Your heart says failure. Your heart says quit. But He who knows all things says hold on. Grace is coming. Forgiveness is coming.

Romans 5:8 said "God commended His love to us that while we were yet sinners, Christ died for us". He loved us when we were sinners. How much does He love us now that we are sons and daughters of Christ? And if our heart condemns us, we need to understand that He's greater. That His voice is greater. His cross is greater. And here's the important thing. In 1 John 3:21, He then goes on and says for if our hearts condemn us not - notice this word - then we have confidence toward God. He's really correcting us, and He's saying I don't want you to just approach me when you're feeling like you're having your best days.

Because there's a tendency in our kind of human love to base it upon performance. My approval over your life is according to your performance. And if you keep my rules, and if you keep what I tell you to do, and if you do everything I ask you to do according to the way that I ask it, then I approve. And you can come with confidence toward me. But God said that's not how I want you to be. I don't want you on your good days to act like you can come because of what you have done and be confident that I'm going to answer and hear your prayer.

How many of you are parents? Lemme see your hand. Parents. How many of you have kids who stole and lie? They lie. And you know what? I wanna ask you a second question. How many of you put em up for adoption when they did? How many of you wanted to? You didn't. As a matter of fact, the worse things they did in reality made me love em more. Made my heart go to em more. God is the same way. And when you understand that, and you understand if our heart condemns us, God is greater than our heart. He does not love me less because I fail. God doesn't condemn. He convicts. The devil condemns, listen, because he gives what's inside of him. He's condemned. He messed up, and God didn't send a flea to redeem him. I messed up, and God bankrupted Heaven and sent His Son to redeem me.

And I'm in a cursed world. I'm in a temptation world. I'm in a sinful world. But I follow Jesus. And when I slip and when I fall, don't you accuse me. You couldn't live it when you were in Heaven, and I'm living it down here on earth. And when I do fall, I'll come boldly into the throne of grace and obtain mercy in the time of need. Somebody shout, "grace, grace, grace"!

I wanna tell you that, just like He came when He found me in my sin, He comes now that I'm a son. And He loves me with the same fervency, and the same grace, and the same mercy. If you understand that, you can live a guilt-free life. I don't have rules and legalism or standards that I have to keep. I have them not so I won't be saved if I don't keep them. I have them because it is my way of saying, "You mean everything to me. And anything that hinders my walk with you, I don't want it in my life anymore. And I may have to fight some things, but you know what? I will fight it because I love you, and I wanna be like you, and I'm made in your image, and I won't settle until I am like you". That's all God needs from you.

So I wanna show you that condemnation says you're disqualified. You're guilty. You're guilty. The heart's beating. And when you do something: guilty, guilty, guilty, guilty, guilty. Unqualified. Unqualified. Watch this in John 21. If anybody had to deal with condemnation, it was Simon Peter. He's the one that denied Jesus three times, and the rooster crowed. And he made this statement. At some point, it just, the heart condemned him so bad. Every time a rooster would crow, don't you know his heart condemned him? Traitor. Denier. Liar. Pathetic so-called preacher. But God knows all things. God didn't see that. God saw a Pentecostal preacher in Acts 2. He saw the man who would preach the message that would birth the church.

And the thing I wanna show you is that's exactly what Satan wants to do with condemnation. So that you'll quit and give up on everything God's promised you. I'm going fishing. I'm going back to what I used to do before I met Jesus. And then notice this part. And they said with him, we're going with you also. If you go back, there's some people that are gonna go back with you.

If you go back to who you used to be and what you used to do, and you start picking up stuff that you were doing before you met Jesus, and now that you've failed Him, and you've listened to the lie of the enemy, that you're not to come to God when you're weak in the time of need but you are further and further, and condemnation drives you away, conviction is always drawing you nearer, and you listen to that voice, not only will you go back to what you used to do, but you're gonna take some people in your family, some people in your sphere of influence. You're gonna take some people with you.

Now watch this. They go out, and they fish all night, and they catch nothing. The next morning as the sun is rising, they're getting their empty nets in and about to call it a night. And they see a silhouette as the sun is coming up behind them of a tall, lean Galilean. And He calls out over the water: did you catch any fish? And your Bible said that John, who laid his head on Jesus' chest, turned to Peter and said, I know that voice. Oh, I know that's Him. That's Him.

And the Bible said their nets were overloaded. And then Bible said that Peter jumped into the water and swam to the bank, got outta the water, and went over, and Jesus was cooking. Had coals that were hot and was cooking bread. And He said, I need some meat. And he gave Him some fish. Cooked some fish. And as he's eating, Jesus does something strange. He says to him, do you love me? I believe at that moment that heart of condemnation starts saying uh oh. He's gonna bring up your past. He's gonna ask you, why did you deny me? He's gonna remind you how bad you messed up, you liar. You denier.

Your Bible says that. But he was not going to deny Jesus. He said I'm not worthy to be crucified like He was. Crucify me upside down. And Jesus knew all things. Jesus knew you're not a piece of trash. That's not who you are. I'm gonna use you on the Day of Pentecost. Now watch this. Go forward. We're almost done. You move into Acts 2. The Holy Spirit fills the Upper Room and fills 120. They spill out into the streets, and Simon Peter begins to preach under the anointing. And he says to the people who crucified Him and who were screaming crucify Him, he says to the same people, you crucified Him, but God has raised Him and made Him Lord and Christ.

And the Bible said in Acts 2:37, "And they were", watch the wording, "pricked in their heart". They felt condemnation. Condemned in their heart. We killed Him. Now it's one thing for us to say I failed Him, but I don't have His blood on my hands literally. They literally had His blood on their hands. They said His blood be on us and on our children. We wanna crucify Him. And they were pricked in their heart. And their heart began to scream, guilty, guilty, guilty. You crucified Him. You killed Him. And they are saying to Simon Peter, is there any hope for somebody like me?

And Peter says oh, if you only knew the guy who's preaching had a heart that condemned him. Lemme introduce you to the Savior. That if your heart condemns you, He's greater than your heart, and He knows all things. He knows you really wanna be free from that thing. He knows you really want to stop. He knows you really want a new life. He knows. He doesn't see you as you are. He sees you, and He puts out a bloody welcome-home mat. And He says come boldly for mercy and grace. Not when you're doing good. Not if you've had the greatest week and your willpower has carried you without one time touching that thing. Come in the time of need. Boldly. That's the key. Boldly. With full confidence in the blood of the Lamb.

And I close with this verse. Psalms 51 said when my heart is overwhelmed: guilty, guilty, guilty. Quit, quit, quit. Condemn, condemn, condemn. When my heart is overwhelmed, lead me to the rock. The one who's greater than my heart and knows all things. Lead me to the rock that is higher than I. Romans 8 said there is now therefore no condemnation to those who are in Christ Jesus. Who do not walk according to the flesh, listening to their heart, but according to the spirit and what Jesus has done by His blood and His name.