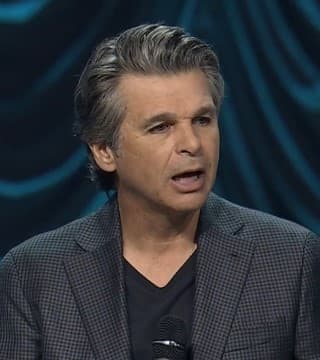 Look with me in Exodus 15 and the Bible said that the children of Israel murmured against Moses. Because when you go through the wilderness, what's in you will come out. And complaining and murmuring was inside of them, and the atmosphere was conducive for whatever was in them to come out. But notice, complaining came out of them, but crying to the Lord came out of Moses. He cried out to the Lord. They talked to Moses, and Moses talked to God. Because Moses said, I don't have water, but God does. And they called the name of that place Marah. They had bitter water.

Nothing affects your life like when you think it's over, and then it gets worse. Nothing affects your life and makes you bitter when you think you're at the end of it, and oh, it's going to be alright now, and finally, finally, finally the light is coming through. The sun is coming through the clouds. Only to find out that when they dipped their hand down into the water, it was bitter. And it was worse, not better. I'm saying to you today that they got to the end of their rope, and they thought the breakthrough had come, and they found water. But it was a cruel joke. It's like the person who's believing for healing, and believing for healing, and then you go to the doctor, and you get the opposite of what you're believing for.

Remember Naomi. She said, don't call me beautiful anymore. Her name means beautiful. She said, don't call me beautiful. She said, call me bitter, for I've been through so much. I'm just a bitter woman. Bitterness is when you're not looking forward to nothing. Bitterness is when something has dried up, and all hope of ever getting out seems to be gone. When bitterness has gotten in your spirit, you don't want to go to church. Everything is wrong with everything. You become angry. You become on edge. And they began to cry - the people began to cry. God looked down from the wilderness, and He didn't see the hot sun. He didn't respond to the wilderness, or the thirst, or the bitter words. But He heard the cry of His people. He said hush, angels' choirs. I hear the cry of my people. Something is crying. My people are crying out for me.

If there's anything that will soften the heart of God, it's when you get broken enough to cry unto God. Job said, I cried, and the Lord delivered me. Jonah said, I cried out to the Lord in the belly of the fish, and the Lord delivered me. The three Hebrew children cried out to God in the fiery furnace. And when the devil says die, and when the devil says you can't make it, and when the devil says that you're going to die in the wilderness, there's one thing you can always do. Cry out unto the Lord. Life is going to give you some bitter water. Jesus said in this world, you will have tribulation. But be of good cheer. I have overcome the world.

Now when I read that, I couldn't help but think, how did they miss the tree? If I'd been in the sun of the desert, with the heat beating down on me, the first thing I would look for is a tree that had some shade. But they did not see it because they were so blinded by their bitterness. When they tasted the bitter water, they never even saw the tree that was there. It's hard to see the tree for the woods. It's hard to see what God is doing sometimes when you enter into bitterness. All you can do is look at your puddle of disappointment. All you can do is look at your pool of shattered dreams, and look at that bitter thing that betrayed you. But there is a tree that God had planted by the bitter pool. And they didn't even see it. They didn't even notice it. And God opened their eyes, and opened the eyes of their leader and showed Moses the only tree in the desert. He saw it. And when he saw it, God said, take that tree, and put it in the water, and the bitter water will become sweet.

Now listen to me. Trees don't grow overnight. You're planning for the future when you plant a tree. Somewhere in the past, God had allowed a seed to fall into the floor of that desert through a crack. And somehow He preserved it. And somehow He allowed just enough moisture to keep that seed alive for month after month, year after year. I think He probably assigned an angel to shoo off any goats or sheep that was eating out there, wandering through the desert. And the angel - can you see him? Scurrying off little sheep, saying I'm guarding this little seed right here because God is planting a tree. He's planting it, and He's growing a tree because He knows one day, there's a bunch of bitter people that are going to go through something, and only the tree can turn their bitterness into sweetness.

They were bitter against Moses. They were bitter against the Israelites when He came and said let my people go. And He's saying I won't let - if you will trust me and not enter into bitterness, I won't let the disease of the Egyptians - which is what? Bitterness, anger, and revenge. Go get them back. Go get them back. You remember how Pharaoh had this anger, this revenge, this bitterness. Bitter water experiences can contaminate our spirit and can cause this anger at people and at situations to begin to boil over in us. And there's bitterness, there's anger, and there's revenge. America needs this kind of healing. Because I don't care what anybody has done to you.

You are never allowed to let the diseases of the Egyptians - bitterness, anger, and revenge - begin to contaminate your spirit. He said if you'll trust me, and you'll know that I am your source, and I am a God of justice, I'll fight the battle for you. But if you want to sit on the throne, and judge everybody, and get revenge, and become bitter and angry, then the diseases will get in your spirit, and contaminate you, and destroy your destiny. The Egyptian disease like indecision.

The only reason that you are where you are is God brought you there. How did they get where they were? The cloud. They were under the cloud. God led them not just to blessing, but to a bitter place. To test them. To see if you're going to let the diseases of the Egyptians - bitterness, anger, revenge, indecision - contaminate your soul. But God had a tree planted before the bitter waters ever came into their life. I'm here today to announce, God did call you. God did send you to that place. God did place you there. God does have plans for you. I don't care how bitter it looks right now. The Egyptian disease of indecision will not take me away from my miracle. When you got there, God knew you would be there.

This is what thrilled me about this story. God never intended for us to go through bitter waters in a bitter place, and camp there, and live there. He said I will test you with situations where it looks like this is it. And when it doesn't happen - hope deferred makes the heart sick. And when it doesn't happen, if you don't get bitter, if you don't get angry, if you don't let it get in you, I'm going to lead you. Notice the next part. He said I will put none of the diseases on you - verse 26 - which I brought on the Egyptians, for I am the Lord who heals you. Then they came to Elim, where there were 12 wells of water and 70 palm trees. And there they camped by the waters. Moses, I never told you to camp at Marah. I just wanted you to pass through and pass the test.

I'm saying to every family, I'm saying to every marriage, I'm saying to every person who has come into contact with bitter waters; this is the Word of the Lord for you and for our nation. That if we will not allow the diseases of Egypt - bitterness, anger, revenge, indecision, doubting God - but if we will trust Him and say I refuse to take on all of that stuff. You're God, and I'm not. I'm yours, and where you lead me, I will follow. But I know you haven't called me to live here. I'm not going to camp here. I'm just going to pass through. And when they drunk of the water, it gave them enough strength to get where God was taking them in the next verse. They exchanged one bitter pool for 12 wells of precious, delicious water. Hallelujah.

And I just felt like the Lord put a little word in my spirit. He said for your shame, you shall have double. One pool of bitterness equals seven wells of righteousness, and blessing, and favor. One old broken-down tree represents 70 trees of blessing that are coming in your future. And for your shame, you shall have the double. Everybody say this. Say in Jesus' name, 12 times more blessing and 70 times more shade and comfort if I won't get bitter. I'm passing through bitterness, but I'm camping out at 70 palm trees and 12 wells. More than enough. Exceedingly, abundantly, above all that I could ask or think. Somebody thank the Lord right now.

How many of you today listening to me would love for God to heal bitterness... I'm cutting right to the chase. If you're tired of being angry, and bitter, and revengeful, and you want God to sit on the throne and not you - how many of you - I just feel like God wants to heal families, and marriages, and relationships, and wants to heal people's spirit. Because the first time He shows up - He doesn't heal disease until He heals bitterness. I think if people will get bitterness healed today, there's going to be a release of miracles in physical healings as soon as we get the bitterness taken care of.

So if I'm preaching to you, or your family, or your life, get out of your seat... If God's speaking to you, and you know this is a word in season, and you know the diseases of Egypt have started to contaminate your soul - indecision. You're confused. A double-minded man is unstable. Because you can't even - you're not being led by God anymore. Your anger is leading. Your bitterness is leading. Come on. This is great. Come on. Every campus. Come on. Come on. We're going to pray this prayer and then I'm going to decree three things. That God is going to turn your bitter pool into 12 wells of 12 times more in blessing. That He's going to take the one broke down tree and turn it into 70 palm trees. Hallelujah. And then the other thing is that for your shame, you shall have double because you passed the test when you walk down that aisle. Lift your hands high all over the buildings, everybody at every campus. Say these words.