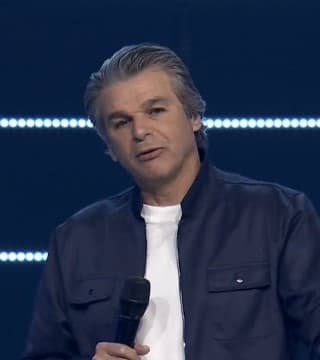 If you have your Bibles, I'd like for you to open them to the book of Genesis 21. I want to talk to you today about "Picking Up Dropped Dreams", picking up dropped dreams. And I'll show you where this is in the scripture. But I think a lot of times that we need to understand that God is a God who gives His people a dream, a purpose, a mission, a plan for their life. A dream is a God-given projected destiny. It means you see it out there or something that God shows you that He says, "This is who I see in you". And that's called a dream. It's a designated end. It's a vision of where I shall be when God places His hand upon my life. And there's no question that God has a dream for every person, but with God's dream, there always comes hell's nightmare to try to steal that dream. And if you don't learn to endure the nightmare, you will never experience the dream.

In other words, if you want to know more about God, then He allows you to go through darkness. It's not God's will for you to always be in sunshiny successful beautiful days, but actually, you'll learn more about God and who He is in the dark places, in the lonely places, in the times when you don't understand and you feel forgotten and you don't know who you are anymore and you don't know what's happening anymore. And God is strangely silent. And many of you are walking through that kind of darkness, and you don't want to be alone, but God has you alone. He has you cornered. I promise you, He's doing a mighty, mighty work in your life and you're going to find out who you are and you're going to find out who God is.

The closer you get to the fulfillment of your dream, the tougher that it gets. This is true, and you see it on the sports field, in football. You'll see the tall, skinny, fast wide receivers run down the field. They'll pick up 20, 30, 40, 50, 60, 70 yards. But when they get down to the five-yard line, you'll see the defense on the other side trade out and out goes some pretty big guys, but then comes in the Behemoth guys. They weigh about 400 pounds. They're mean. They're breath stinks. They look right there at you like, "If you try to come five more yards, I will rip your head off".

And some of you right now are facing some Behemoth demons. You've never faced anything like it, and you don't understand why, and it's just a sign that you're closer than you've ever been before. I still believe that some of you are so close that hell has brought out its biggest demons to get you to give up in the middle of the nightmare so that you'll never experience the dream. I'm preaching to you today the purpose of the nightmare is to discourage you, to give up on the dream.

You know, somebody said, many years ago, "Anything worth doing is worth doing well". But here's a new one for you. "Anything worth doing is worth failing at". And that's why you have to endure the nightmare; because if you want to give yourself to something, give yourself to something that's worth failing over. Christ's likeness is worth failing over. Maybe I'm not like Christ like I want to be; but even if I'm failing my way towards being like Christ, at least I'm trying. I don't let non-Christian people tell me how I ought to be a better Christian. At least I'm trying. At last I'm striving. At last I'm reaching.

Notice that the pillow became a pillar, that text said. Said he then made it a pillar and he poured oil on it and he built the house of God, Beth-el. The pillow became a pillar. And if you get a dream from heaven, you can build on it. You can build your life on it. What God tells you, He'll perform. What are you laying your head on? John laid his head on Jesus' chest. And that's how he could endure the nightmare of the island of Patmos. He was alone there on that island. But suddenly, because he knew where to put his head, he knew where to lean, he knew where to rest - it was Jesus.

God gave him and took him into heaven and gave him the 22 chapters of the book of Revelation because he had a dream while he was living a nightmare. And I'm telling you that you can't get one without the other. I'm preaching to somebody who needs to get some determination. I'm preaching to somebody who needs to get a spirit that says, "I will not quit, I will not give up, I will not let up because I know what God has promised me". He's laid His hand on you. He started it. He's going to finish it. He promised it. He's going to perform it.

The nightmare gets loud the closer you get to the dream. And God, at the same time, often chooses to go silent. That's why so many people quit. You're trying to get to the dream. The nightmare comes. And just when you think you need God to really speak to you, He goes silent... and the nightmare gets louder. And in that moment, you have to walk by faith. You have to go because you know God told you what He told you. "And I'm not going to give up now and I'm not going to doubt it now. I'm going to believe God now".

Don't let anybody else's opinion become your reality. Just because you're walking through a nightmare doesn't mean that the dream isn't real. And don't you let other people's opinion become your reality. Ten people's opinion in the Old Testament caused three million people to live in the wilderness for 40 years and wander in the wilderness for 40 years. They let other, ten other people's opinion become their reality. Saul had an opinion. He said, "David, you can't defeat Goliath with that slingshot and that stone. You need this armor and you need to do this, and you need to do that". But David said, "I'm not going to let your opinion, Saul, become my reality. I'm going to do what God has told me to do".

So many times, people give up and they quit right on the verge. That's why I wanted to end with this story in Genesis 21, because in this story, we have Ishmael, the boy. And I just want to read it to you, and I want you to see it. And I want you to see what's happening. She's out in the wilderness and the scripture said, in verse 17, that "God heard the voice of the lad. The angel of God called to Hagar out of heaven and said to her, What ails you, Hagar? Fear not, for God has heard the voice of the lad where he is". Listen to these words, verse 18, "Arise; lift up the lad. Hold him with your hand and I will make him a great nation. And God opened her eyes and she saw a well of water".

What I want you to see in this story is Ishmael is Hagar's dream. What I want you to see in this story is she had the dream, but she gets into a wilderness. And in a moment of discouragement, she drops the dream. She puts it under a bush. She hears the child crying and she has no resources. She has no food, no water, in a hot desert. And so, she can't bear to hear the baby die and suffer, so she goes far enough away that she can't hear him. But there's an amazing thing. The Bible said God heard the dream, or the child, crying out, which tells me something really powerful; that if you have a God-given dream, it can pray and cry even if you've given up on it. And she had given up and she had dropped her dream and she had walked off somewhere and she was weeping because she knew her baby was dying. Her dream was dying. But the dream was crying out.

The dream was crying out and God didn't hear Hager, He heard the dream. And then, He said to that mother, "Go back..." And I just really feel like this simple message is for somebody. I want you to go back to some dreams that you've dropped. And I want you to pick 'em back up because I'm not through with 'em. I know that it looked like a nightmare, but I just want you to know that if you endured the nightmare, you're going to experience the dream, and it's time to pick up some dropped dreams again. "And it's time for you to take 'em in your arms again and hold 'em up before Me again and watch Me bring My power and My life and My resurrection on those dreams that you have dropped". Picking up dropped dreams is a word in season for somebody.

Then, the Bible said God showed her where the water was. He opened her eyes. God showed her how to keep the dream alive. I'm telling you today that it's time to pick up the dropped dreams. I'm so glad that God is faithful. I feel like I'm just standing up here prophesying now. I'm standing up here, and I'm going to tell you something else. You're looking at a preacher who has stood in this pulpit, and I have preached pre-trib, meaning before I got out of the storm in the nightmare with our family, I had to stand here and preach, "Someday, God will; someday, God will; someday, God will".

Cherise and I had to stand and say, "Someday, God will". Pre-trib. Pre-tribulation. But now, I stand at the age of 56, listen to this, we're post-Trib. Post means after, on the other side. And I can tell some of you young little couples out there, when I stood up here years ago and I had a house full of teenagers; Saturday night, my eyes were puffy 'cause I hadn't slept all night and worrying about 'em and not knowing what in the world's going on. We found out something and this and that, or a phone call, or this and that. And we liked to lost our minds. And I'd still get up and grab my black Bible and my microphone.

Let's get up on our feet and shout like we believe that what God said, he's able to perform. I feel like doing something. How many of you have dropped some dreams? And you almost didn't want me to preach what I preached today because you had no intention of picking it back up 'cause you've adjusted, but just when you think you're safe, God will come along and say, "It's time. It's time". I feel like today that you need to pick up dropped dreams, and in your hands hold them up. Just lift your hands representing dropped dreams. Hold 'em before Heaven, and say, "God, here it is".

Now everybody say this, "I'm going to trust you with this dream like never before. You spoke to Pastor and you told 'em to trust you, and now he's challenging me in my situation that I've been worrying about to trust You". Say this, "Jesus, I trust You from this day forward. I believe my dreams will live". Now give Him praise one more time. Oh, to God be the glory.