Jentezen Franklin - Begging For The Body 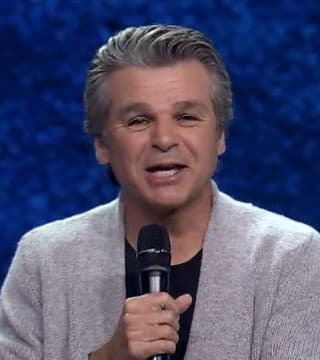 If you have your Bibles, I want you to open them with me to the book of Matthew, the 27th chapter. I want to talk to you, as we are concluding this series on The Exchange today, about this remarkable man who is mentioned in all four of the gospels. He lived in a little obscure village called Arimathea, which is about 20 miles from Jerusalem. And yet, his contribution to the kingdom of God is so incredible, again, that every writer of the gospel, every New, of the four gospels, they included the story of Joseph of Arimathea. The Bible tells us a few facts about Him. Number one, it says in verse 57 he was a rich man. He was wealthy. He was blessed, we would say. He had tremendous resources. And then, the Bible says in the same verse that he became a disciple of Jesus.

So he had influence. He had wealthy. He had power. He had prestige. But he understood it wasn't about him. The thing that I want you to see is this man went where no one else could go but someone like himself, who had been trusted with much. When it came time to affect the body of Christ, the physical body of Christ - Jesus had been crucified. He had died. And now, the body of Christ was being kept by Pilate, the judge. And he had the remains of Jesus. He had His physical body. And this man used the influence, the wealth, the giftings that were significant to him, and he knew that that gave him an opportunity to go where nobody else could go except him, because I guess he had probably given to this and given to that.

He understood, "God gave me all of this wealth and prestige for one purpose... to affect the body of Christ". "I need to get the body of Christ into my city and prepare a place to put it. I don't care what condition it's in. I'm going to move it from a death position to a resurrection position. And it's my responsibility..." Think about what I'm saying. One man moved the body of Christ. One man said, "I'm moving it from where it is to where it ought to be". And he said, "The only way I can do this is I understand God has not blessed me with wealth and with fame and with prestige and with popularity to be all about me, but He has given me this influence and resources for one purpose, to..."

But this guy had the total opposite idea. He said, "God has blessed me so much, has raised me so much, has been so good to me... I'm begging you, Pilate. Let me get my hands involved with the body of Christ. I'm not going to use all the blessings that God has given me to keep me disconnected from the body. The only reason I was given all of this stuff was that it should help impact and influence the body of Christ in my city to have a place". It's pretty amazing. Are you willing to beg for the opportunity to be involved in the body of Christ? Most people have to be begged to serve, begged to give. We are not begging anybody for anything. It is a privilege to give. It is a privilege to serve. It is an honor to be in church, worshiping Jesus. And that's the attitude that God looks for is "do you willingly offer yourself to Me? Or do people have to beg you to do what you know you ought to be doing"?

You see, the church ought to be our passion. Compassion was birthed in his heart for the church, and he said, "I don't care what they, it looks like. It's got nail scars in it. I know it's bloody. I know it's bruised. I know it doesn't look like much. But I want... I'm begging for the opportunity to be involved with that body that doesn't look like much". See, I don't care how bad people look. I don't care how decayed their life is. I don't care how dead spiritually they are, addicted they are. The truth is, they ought to be a part of the body of Christ, and it must become our obsession and our passion and our compassion to reach them. We're not a sanctuary for the saved. We are a hospital for the sick, and everyone is welcome here with your addiction, with your problem, with your issues, with your troubled marriage, with your messed up family. We're all messed up but by the grace of God, and we must reach people with the message of Jesus.

The resurrection is a type of the rapture, and our job is to provide a place for the body of Christ in every city where we can go. And what we're doing is we're moving the body of Christ from this ol' world of death and we're getting it ready for the trumpet to sound. And the resurrection's going to take place, and those who have been moved from death to life are going to be ready for the resurrection. When the trumpet sounds, we're going up. Oh, I still want to say that I believe in the second coming of Jesus Christ. It could happen today. And I tell you, it's going to be wonderful. I'm not so in touch with this world that there's nothing I wouldn't gladly leave behind and say, "I'm going to a better country". How about you?

We're getting ready for a resurrection. This is what God has called Free Chapel to do. We're supposed to be involved in positioning the body of Christ for a revival. That's what these buildings are about. That's why we're building new churches. That's why we're buying new TV stations. That's why we're expanding the ministry to 248 nations. Why do we do that? Why do we try to reach hundreds of thousands every week? Not try to; we do by social media and all that's going on... the YouTube's and all of those things. Even now, tens of thousands of people are watching online. Why do that? Because we're moving the body of Christ, positioning them for the next mighty move of God.

A revival is coming to the body of Christ. People are going to be baptized in the Holy Spirit by the thousands and millions. Miracles are coming back to the church. Come on. And we need to position the body of Christ. Your sons and your daughters will prophecy when God pours out His Spirit; and God says, "I just need a church to get the vision of providing a place for the body of Christ so that when the revival comes and I breathe on my church, resurrection life will come to a whole generation. I don't want the clanking of religious machinery around here. I want revival. I want resurrection. He was involved in anointing the body of Christ. The Bible said he laid it, listen to these words, "in his own tomb". O-W-N; his own tomb.

That's a remarkable thing. In other words, he had ownership. It cost him something. He had used his wealth to buy this piece of property. And the Bible said it was a rock that he had hewn out. He had cut it out. He had to get a pick and he had to maybe hire people to help him and they had to get wheelbarrows and they had to - How long, how hard - It's hard work. Ministry is a four letter word...work. And he had bought a place that he owned. He had hewn it out, dug it out...all to provide a place for the body of Christ. That's a lot. "You're over-giving. You need to calm down. You're getting a little... You're a little too - Why are you begging to be involved in that? It's just the church. They don't need your help anyhow". But this guy said, "I'm begging. Let me work for the kingdom. Let what I'm doing matter beyond just blessing me. Let it have impact on the body of Christ". He hewn it out.

The Bible said that when he got through with the tomb and he got the body of Jesus dressed in white linen and put the anointing spices on it, saying, "I'm anointing something dead but it's about to come alive," and he laid it in the tomb and he rolled the stone in front; and the Bible said, listen to this, that Mary Magdalene, verse 61, Mary Magdalene was there on one side and the other Mary, you know, the virgin Mary... pure, holy Mary - So I want you to see it. There is Mary Magdalene who you know, according to the Bible, was a former prostitute. She had seven demons when Jesus met her and He cast the devil out of her. She felt comfortable hanging around this place where the body of Christ was. She didn't feel like she was less than.

And here's holy Mary, the other Mary. I like how the Bible puts that. There's that Mary and then there's the other Mary, Virgin Mary, holy Mary. But both of them felt equally comfortable in this place that was housing the body of Christ. It was for every status of society. He positioned the body, listen, so it was attractive to everybody. So if you had a past, you could come and you didn't feel less than sister righteous who had been in the church all of her life; that you could come from a terrible background and you were all treated the same, that you both got equal access and everybody - If you were rich, you felt wanted. If you were poor, you felt cherished. If you were someone of a, had an addiction or if you'd been in church all your life and never smoked, never drank, never chewed, never ran with women who do - You felt totally comfortable from any status of life.