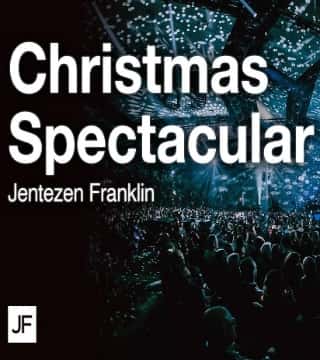 Since the beginning, through the countless centuries of darkness, all of creation waited eagerly with a growing hope for a Savior. And throughout the ages, this hope could not dim, as men and women of God saw brief glimpses of the divine. Their spirits lifted by an unrelenting expectation of something magnificent that was yet to come. They wrote of a star that would come forth from Jacob, "For unto us, a child is born, the Prince of Peace. He shall be called Emmanuel and His throne would be established forever". And now, in a place least expected hope has arrived. Imagine the scene as the celestial curtain was pulled aside with angels singing and radiant beams of God's love cascading downward. It is something more than anyone could ever hope or even dream. The spectacular arrival of the Messiah, Jesus Christ.

In Nazareth, Joseph, the carpenter has been introduced to Mary, a girl from the village. With the blessing of her father, Mary and Joseph are now betrothed, promised to each other in marriage. Soon after, when Mary was alone, God sent an angel to speak to her. "Mary, do not be afraid for you have been chosen. You will give birth to a son and you are to name Him Jesus. He will be supreme and He'll be known as the Son of the Most High. His kingdom will reign forever. The Holy Spirit will come upon you and the power of the Most High will cover you. The holy child you will give birth to will be called the Son of God. Nothing is impossible with God". Upon hearing this, Mary treasured and pondered all these things in her heart.

The greatest gift ever given to mankind was a child born in a humble stable. A savior who would bring God's magnificent light into this darkened world. The birth of Jesus, the Son of God, was caused for a wonderful and glorious celebration. And those very first gifts of Christmas were given over 2000 years ago, coming from a most unexpected source. For far from Israel wise men in the East were preparing for a great journey to see with their own eyes, the Messiah, the Prince of Peace. And they would bring more than just their praise and adulation. Along the journey, they brought their gifts of gold, frankincense, and Mer, the first gifts of Christmas.

The story of how these star gazes discovered their destiny is extraordinary. For the revelation of Christ's birth was a message written within the stars, a celestial mystery unlocked by these wise men. Their passion was to study the heavens, as they watched and charted those distant lights that ignited the atmosphere with splendorous wonder. And yet, something was about to happen that would change them forever. For on this night, a new star appeared in the skies above, beckoning them, heralding the arrival of a new King born. It was not just any king or even a great king. It was the King of kings. And so, these wise men set out on unimagined paths, humbly following the star to their newborn king. The heavens now blazed a message for eternity had whispered its welcome. Come, come see Emmanuel, God with us.

Aren't you thankful for that name? Aren't you thankful for that name? The wonder. The wonder of His name. The prophet Isaiah in the 9th chapter said, "His name shall be called Wonderful, Counselor, Mighty God, Everlasting Father, Prince of Peace". And He's here. Wherever His name is praised and glorified He shows up. There was something that was said by a president in years gone by when the first man landed on the moon. He said in a speech that he gave, the President at that time, he said, "The planting of human feet on the moon is the greatest event in human history". And I'd like to respectfully disagree.

The greatest event in human history was when God Almighty placed His feet in a manger in Bethlehem and came to us when we could not reach Him, when we could not get to Him. All the way from the ivory palaces of heaven to a barnyard in Bethlehem. As a matter of fact, if there's no virgin birth, let me put it like this, no virgin birth, no deity, no God. No deity, no sinless life, no sinless life, then no sacrificial death, no sacrificial death, no resurrection. No resurrection, no salvation. But Jesus came to earth so that we could go to heaven. The infinite one became an infant. He was born of a virgin so that we could be born again. He was born a King. We didn't elect Him, and nobody can impeach Him. He's King of kings and He's Lord of lords.

When I think about the cross, when I think about Jesus, I don't just think about a cradle. The real story of Christmas is not just a cradle, but it includes a cross and it includes a crown. The cradle was the virgin birth, the cross is where the man, the God man, where God sent a package to earth, the gift that was wrapped, the gift of divinity wrapped in humanity. And on the cross, He died. He died and He bled for me and for you, to cleanse us, to forgive us. But three days later comes the crown when He rose from the dead. And He said to every one of you tonight, who've lost a loved one, who will have an empty seat at the table, who've lost a mother, a father, a son, a brother, someone near and dear to you. "I came that you might have life and have eternal life through my name. And I have crowned you with this thing that is available to you called salvation, forgiveness, cleansing, a new start, a new beginning".

There's something about the name of Jesus that can comfort even the most broken heart. And look, we're all just people, we're all struggling, we're all going through things in our life. And our message tonight is Jesus. Jesus cares, Jesus loves you, He's never given up on you. You may have given up on yourself, you may be addicted, you may have secrets, and pain, and brokenness in your family, and in your life, But just call on Jesus, He'll never turn you away. There's nothing you've done that He can't forgive. And I'm gonna ask you, all of you in this room, those of you in the overflow and those of you watching online, I'm gonna ask you to pray this prayer behind me. The wonder of His name, let's call on His name right now. Pray these words:

What a beautiful name. What a lovely name. The name of Jesus. Give Him praise!