Jentezen Franklin - Through His Eyes (Communion at The Garden Tomb) 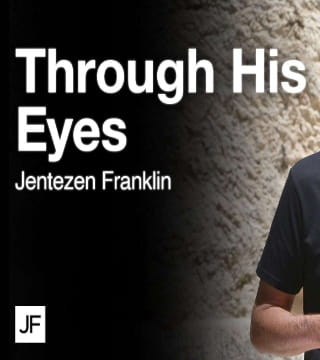 I want to welcome you to wonderful edition of Kingdom Connection and of course I'm standing at the tomb, the empty tomb. Inside is a sign that says, He is not here. People come from all over the world and they want to come, this is one of the highlights they want to come in and they want to go into Joseph of Arimathea's Tomb, and they want to see, and it's always the same when people walk in. He's not here, as the angel said, "He has risen".

I want to speak to you for a few moments about something. Take your Bible, if you can, right where you're watching this program, and open it up to Psalms 22. In my opinion, maybe the most amazing chapter in all of the Bible. I know that's saying a lot because it's all the inspired Word of God. But maybe the most amazing chapter in the Bible is Psalms 22. David wrote Psalms 22 a thousand years before Christ was crucified and buried in a tomb. And the amazing prophecy of the cross, the accuracy of the prophecy of the cross is astonishing. And it was King David that became an eyewitness through prophecy.

Now, when I say an eye witness, I don't mean from the ground looking up to the cross. But God allowed Him by the Holy Spirit to see through Jesus eyes looking down. What it was like to hang on that cross. What it was like to be nailed to that cross. And amazing prophecies, astounding prophecies, again, written a thousand years before Jesus Christ showed up and became the sacrifice. He recites words, that Jesus would later quote. Letting us know Psalms 22, that that was written in the Old Testament was fulfilled when Jesus hung on the cross as the Gospel of Matthew, Mark, Luke, and John, all proclaim. Listen to these amazing words, Psalms 22:1 starts out saying, "My God, my God, why have you forsaken me"?

The first verse of Psalms 22, written a thousand years before Christ appeared on the earth are the very words that Jesus would utter on the cross when He cried out just before He took His last breath. He said, "My God, my God, why have you forsaken Me"? In verse 2 of Psalms 22 Jesus describes the supernatural darkness that would cover the earth at midday when Jesus was crucified. The sun the Bible said, "Refuse to shine", from 12 o'clock in the afternoon on-Jerusalem time to 3 P.M. and it is described in verse 2. Then He goes on and begins to give the details of the scorn and the ridicule that the Son of God received when Jesus was crucified. In verse 6, He says, I am a reproach to the people and I am the scorn of the people. In verse 7 they say, listen to these words, they're are so important. They say "He trusted in Him, let Him deliver Himself".

And when you read the New Testament, in the book of Matthew of the crucifixion, the Pharisees gathered around the cross, and they said, you've saved others, save yourself, fulfilling that prophecy of the very words that were written 1000 years before Jesus would hang on the cross. The amazing prophecies of the cross in Psalms 22. Listen to it, David sees this. He sees it happening, He's hanging on the cross with Jesus seeing through prophetic eyes what it was like for our for our Savior. Verse 12, "the bulls of Bashan have surrounded me. They gape my side". Amazing accuracy, He said, it's like something is happening as Jesus is hanging on the cross, and a bull with his horn, stabs Jesus and leaves an opening in His side. Even more accuracy, we know that, that a Centurion, a soldier stabbed Jesus in the side with a spear. It was prophesied a thousand years before.

Verse 14, blows my mind. Listen to the exact wording. Jesus said, "I am poured out like water". The Bible said when that man stabbed Jesus in the side, that soldier that poured forth blood and there poured forth water. He said, "My bones are pulled out of joint". Listen to the exact wording of the Word of God. "My heart is like wax melted within me". Literally, He's drowning in his own fluids. You have to understand, the Jews had never seen a person crucified. It was not a form of punishment or execution for the Jews. They didn't have modern technology. No one in the Jewish culture in David's time had ever seen a Roman crucifixion. And yet he's writing with specific words, the Roman style of crucifixion a thousand years before Jesus would hang on the cross. And it's just astounding and anyone will tell you that when a person was crucified, they drowned in their own fluid.

Thus, the words, "My heart is like wax, melted within me". And it tells of the blood and the water pouring out of His side. We feel Jesus blistering thirst in verse 15. When He said, "My strength," notice the wording, "Is dried up, my tongue clings to my jaw". In other words, and then He says, "You brought me to the dust of death". Which is dry mouth, He's describing when Jesus hung on the cross. He said "I thirst. I thirst". And they took vinegar and put it on a sponge on the end of the spear and pressed it to His lips and He refused to drink it because it's bitter. And He was saying, "I refuse to be bitter against those who are crucifying me now". It's really amazing, then He goes on and He says "the wild dogs have surrounded me".

I went on a trip one time to South Africa and after I'd ministered, my wife and I went on, and some of our family went on a safari. And we followed some wild dogs and they got upon a deer. And it was the most brutal thing I've ever seen in my life within literally within minutes they devoured that deer. And when Jesus described what it felt like through David writing, when David's trying to describe what He's experiencing in this vision, in this prophecy, he said, "Wild dogs have surrounded me, they're ripping my body to pieces". Just like wild dogs tearing from limb to limb. That's what Jesus was suffering. That's what it felt like in verse 16. Listen to the wording, the truth, the astounding accuracy of the prophecies of the cross written a thousand years before Jesus died on the cross.

In verse 16, "They pierced my hands and my feet". Listen, you may have denied Jesus, you may have left the faith and you're trying other religions, you're trying this and that, but you will never find a more accurate truth. And the accuracy of this book and the prophecies are astonishing. In verse 17, "They look and stare at me". Verse 18, you're not gonna believe this. A thousand years before Jesus died on the cross, He said, these words, David did, "They divide my garments among them, they cast lots and gamble for my clothing". And the Bible in the New Testament said, "When Jesus was hanging on the cross, that the Roman soldiers took His garment," which would include His prayer shawl, and they're gambling for it.

It was prophesied a thousand years before it happened. He even identifies the very agents of the crucifixion when he refers to the Gentile dogs, and the congregation of the wicked. He says those wording that's who's doing this to him? Who's doing it? The Roman soldiers were Gentiles. And who was the congregation of the wicked, the Jewish ruling council. It was both and He's so accurate in the prophecy, the Father turned His back. And that's when Jesus felt abandoned, God abandoned. And he said, "My God, my God, why have you forsaken me"? And I guess it just hit me that I'm standing feet away. I mean, I can walk across this place.

In there is what we believe to be Golgotha Hill, it's it's it sure fits the pattern. It sure lines up with everything in the scripture, where Jesus died for you and me, and was God forsaken. So, that God could reach down out of heaven and tear the veil and say, "Come on in". And it wasn't just letting us come in, but it was letting God come out to us. And He said, "I'm going to live with you every day of your life". Psalms 22 finishes with, you know it's getting darker and darker. There's the spikes in his hands and His feet, the beatings, the tearing, to pieces of the whip, it describes it all. And then comes this powerful declaration in verse 22, "I will declare your name to my brother and I will praise you, in the midst of the assembly", you know what He's talking about? Jesus was prophesying through David, "there's coming a day, when what I will do will bring praise to my name, and to the Father. Because I'm not just going to die", just like it's prophesied on the cross, "but I'm going to get up on the third day. And the angel's going to roll the stone away and I'm going to walk out of that tomb".

And you know what, I hear the Muslim prayer towers going off right now. And that's fine because it doesn't bother me. Because I know who the Messiah is. I know who Jesus is. I know who our Father is. He is Jesus, David looked down to the Gentiles, and he not only saw the death, and the burial of Jesus, but he saw the wrecks, the resurrection. It's not a happen chance that a man could write with such accuracy about the cross a thousand years before it happened. And all of it from the crucifixion, to the resurrection in Psalms 22, prophesied and all fulfilled in Jesus.

And I have mentioned to you today that I wanted to have communion with you and your family. And so, I want you to take the bread and take the wine, the fruit of divine, and here in this time together, I want to pray for you. And I want you to receive the bread with me. We appreciate all of you who watch this program. We pray for you, we pray for the blood of Jesus to cover you and your family and your house. We pray for the blood of Jesus to protect you and guide you and lead you. And that you would know the forgiveness that our Savior offers you today. If you don't know Him, why don't you just say:

He's a good God, He sent His Son, God so loved the world, that He sent you, Jesus. "Take the bread, this bread represents my body, take and eat this dew in remembrance of me until I come", let's do it together.

Thank you, Lord for the blood. And may that blood cover you and your family. May that blood and the resurrection power of God. May it be real in your life today. Because He lives, you can face tomorrow, because he lives, listen to it all fear is gone because I know He holds the future. My life is worth living, just because He lives. Hallelujah He's alive. I'd love to hear from you today. If you prayed that prayer, we want to tell you what God has in store for you. We've got material free material that will be a blessing to you and your family. Reach out and tell somebody, it'll make a profound difference. God bless you. Thank you for watching this program. Thank you for helping us as we proclaim the answer Jesus Christ to the whole world for God's glory. Thank you so much be blessed.