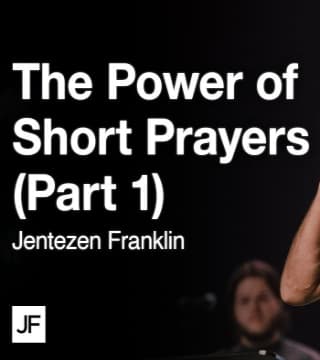 Hello, and thank you for watching Kingdom Connection. Today's message is about the power of prayer, specifically, I believe in prayers that are short prayers. Really, the most powerful prayers in the Bible, the most profound answers to prayer in the Bible came through short prayers. Sometimes we condemn ourselves, sometimes we feel like we're just not spiritual because we don't pray hours and hours in prayer. Sometimes we forget how powerful small prayers, short prayers are. Prayers all day long. God is listening, and God will leave where He is, and come to where prayer is when you pray short prayers. Let's go into the service, this is gonna change your life, and I'm gonna come back and I'm gonna pray a short prayer with you, and I believe God's gonna do something powerful in your life.

The Apostle Paul in Acts 16:16: "Cast the devil out of a woman who was a fortune teller operating under a demonic spirit of witchcraft". He prayed a 14-word prayer and the demon possessed woman was set free from 14 words of prayer. Hezekiah in Isaiah 38:1 prayed a 29-word prayer and God added 15 years to his life. Thirty-nine words of prayer and God gave him 15 more years. The prayer of Jabez one of my favorite prayers. I pray it everyday of my life is 29 or 30 words it's 30 words. "Oh, that You would bless me indeed, and enlarge my territory, let your hand be upon me, and keep me from evil". And God granted him his request. The Lord's prayer is just 68 words, 68 words when Jesus said, "If you wanna know how to pray, pray this". And He didn't give us seven chapters of a prayer. He didn't give us nine books of a prayer. He gave us a prayer of 68 words, and He said, "If you'll pray this every day".

That short prayer often has an urgency that long prayers do not have. It's like a mother seeing her child walking out in front of a bus or a car and she just says, "Jesus"! It's passionate, it's powerful. It's short, but it can be effective. We've all experienced that driving our car or something and you see a car coming right at you. "Oh, God in the name of Jesus". And when you do there's such passion. It's not a long prayer. It's not the length of the prayer. It's the passion, the heartfelt purposeful prayer.

"God," the scripture said, "When he prayed that prayer came from Teman, and from Mount Paran". What does that mean? It means God will leave where He is and come to where prayer is. When you pray and you don't have to... He was a minor prophet. He only wrote three books in the whole, not three books three chapters in the whole Bible. And when he prayed God left, I know God is omnipresent one little kid asked his momma, "Momma where did God come from"? She said, "I'm show you, He came from Teman". Because the text said, "God came from Teman," but God's omnipresent. But what I'm telling you is this. Teman was a horseshoe of mountains included in that horseshoe of mountains on one end was Teman on the other was Mount Paran. All of that would be today what we call and what the scripture refers to all of that mountainous horseshoe region would be Mount Sinai.

God said, "I know I'm doing my purpose and my big stuff up here, but everybody matters to me and if they will pray. I heard a man pray. A minor prophet pray, and I know I'm doing big stuff up here. I know my glory's up here. I know I'm running the universe up here. I know I'm speaking galaxies into existence and I'm taking care of everything on the planets. I'm in charge of everything, large and in control". But when He heard a prayer, a short prayer God left Teman and came to the prophet. I want you to understand today that when we pray God will move. When we ask quick in prayers, short prayers, with passion. God will leave His purpose and come to a possibility when we pray. God loves prayer so much that He will leave creating the stars and galaxies and come to us. God will leave His purpose to come work with a possibility because He loves us.

July 1969 Neil Armstrong was the first man to walk on the moon. He said these words, "One small step for man, one giant leap for mankind". Later that day he admitted that he also said these words, "Good night and good luck Mr. Gorski". To understand why he said that last sentence is to go back to his childhood. Neil Armstrong and his brother and family lived beside a couple by the name of the Gorski's. And he was a fantastic guy, he would play with the kids, he would throw a baseball with the kids. He was a very kind man. He would show them how to fix things and just take time with them. But Mrs. Gorski was what he called, Neil Armstrong, "The wicked with of the West". He said, "She was mean, she was ugly, she hated kids and she particularly hated the Armstrong kids".

And one day they threw the baseball over the fence and Neil Armstrong jumped over the fence and he went over to the window. The window was up of the Gorski's home and under the shrubbery he saw his baseball. And as he's listening, they're having a huge argument. And he said, "Mrs. Gorski is furious with Mr. Gorski and he's saying things like", I wanna get the story right. He's saying things like, "How long is it gonna be before you give me some loving? How long is it not", I won't fill in everything, but you understand what's going on here. And she is furious, and she is cold, and she is indifferent. And he's begging her, "I just want a little hug. I just want a little kiss". I'mma get my version of it, amen. "I just want a little sugar. When? How long are you gonna be upset with me"? And she said and Neil Armstrong was listening through that window. She said, "I'll tell you when I'm gon' give you some loving and some sugar when the dumb Armstrong kid stands on the moon that's when I'll give you all the loving you want".

So, when Neil Armstrong stood and he said, "One small step for man and one great leap for mankind. Goodnight and good luck Mr. Gorski". He was saying, "I hope you get some sugar tonight". Why did I tell you that story? What I'm trying to tell you is you never know whose walking into your backyard. You never know who the next possibility is going to be. You never know when somebody has been called of God to do something that is impossible and never been done before. And you never know when you're that person, but if you ever learn how to pray, God can do miraculous things because you are a possibility and God will leave His purpose and come to a possibility where that person prays. If you're young pray, if you're old pray, you don't have to be a preacher to pray. But if you'll learn to pray even short prayers you will be amazed at the possibility God will see in you.

A man, true story a man was on the side of the road, his hood on his engine of his car was up and he was trying to get his car started. Behind him pulls a long stretch limousine. A chauffeur gets out opens the door a man steps out in a three-piece suit, necktie, looks like a million bucks. Walks over, sees the man trying to fidget with his motor and get it going. And he says, "What's the problem"? And the man looks at him, he can't believe this guy in a limousine has stopped to help him. And he says, "Well, Sir I can't get it started". He said, "Well, would you sit in the car and let me, I know a little bit about these engines". And he said, "Sure, okay".

And he sat in there and he said, "The man fidgeted around a little bit and said 'try it now'", and as soon as he tried it, he hit the starter and the car started right up. And he took his white hanky out and was wiping the grease off his hands and bout to walk off. And He said, "Hey, hey wait a minute. How much do I owe you? And why did you do this? Look at you, why did you fix my car"? He said, "My name is Henry Ford, and he said, I can't stand to see one of my creations broke down sitting on the side of the road when it's supposed to be moving".

Now I don't know who I'm preaching to today, but your Creator will not allow you to just sit on the side of the road, broke down. He sent me to tell you He knows He's the good Samaritan. He knows how to pour in the oil in the wine. He knows how to get you back going again. And if you'll pray a short prayer God will leave His purpose and He will find the possibility of you and a brand-new life, a brand-new marriage, a brand-new family, a brand-new start. It's not impossible. It's not impossible with God if you will pray. Hallelujah, hallelujah.

And every time He's going somewhere He's getting interrupted. And He stops where he's going, His purpose for a possibility. Woman with the issue of blood, not on the schedule. He's busy. He's the King of Kings. He's God almighty walking in flesh and you're not that important. You're broke, you're sick and He really doesn't have time for you, but when she touched the hem of His garment. He put on the brakes, and He said, "Who touched me? I've gotta leave my purpose". I feel a possibility of somebody getting healed in this room today. Oh, God, turn to somebody and say: everybody counts, everybody counts. Say it, again. To God He may have important things He's doing, but everybody counts, and whosoever shall call upon the name of the Lord shall be saved. Call on Him right now. Sometimes it's a quick passionate, "Jesus"!

I really believe today that that short, nine word prayer that that thief on the cross prayed changed his life, his family, for generations and even today. A man who had a horrible reputation, I'm preaching about. It's a short prayer I'm gonna lead you in, just a few sentences, but it can have profound results on your life. The Bible said, "if you confess with your mouth and believe in your heart that God raised Jesus from the dead, you can and shall be saved". Pray this prayer, say:

Jesus, you are the Savior. I put all my faith in You. I know when You hung on the cross You were there for me. And today, I surrender. Today, wash me, forgive me, cleanse me. In Jesus' name. I am free. I am forgiven, I am loved by God. In Jesus' name.