Derek Prince - What's God Going To Do About The Demoralization 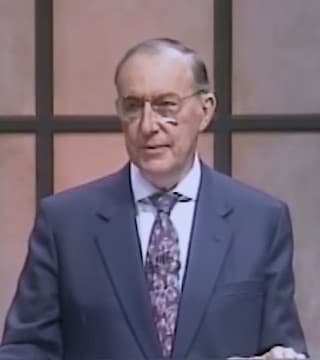 This excerpt is from: How to Approach Biblical Prophecy
So, if corruption is progressive and irreversible what is God going to do about it? Well, praise God, He has an answer. You’ll find it in 2 Corinthians 5:17: Therefore, if anyone is in Christ he is a new creation old things have passed away behold, all things have become new and all things are of God. God does not patch up the old man, He produces a new creation. The attempt to redeem society without changing people is doomed to defeat. I’ve heard people talk about redeeming the performing arts. It depends what you mean. If it means that maybe in the performing arts you have an opportunity to confront people with the testimony of Jesus. Praise God. But if you think that the performing arts can be redeemed without people being changed you’re deceived. God is not redeeming the old corrupt nature. It’s destined for His final judgment. God’s remedy is much more radical it’s a new creation.

Those of us who’ve experienced the new creation understand what it means. I mean, it took me months to discover what God had done in me in one night. I really couldn’t believe it but it happened. That’s a new creation. Please understand, I was not perfect. I’m still not perfect. But, I was different, that’s what matters. A radical change in your life. So, God’s going to do what? He’s going to bring forth a new creation. If anyone is in Christ he is a new creation. You cannot be in Christ and remain the same. Something totally new has happened that only God creates. Man can reform, man can improve but only God can create. This is something that God has to do for us and in us we cannot do it of ourselves. To be in Christ is to become a new creation. That’s His logical remedy for the old, corrupt, fallen nature. God is not going to patch it up He’s not going to improve it. He doesn’t send the old man to church or Sunday school or teach him the Golden Rule.

I got this sentence which is in my mind "God’s solution is execution." That’s it. But, the mercy is the execution took place when Jesus died on the cross. Our old man was crucified in Him. You have to know that and you have to believe it and act in it, and it works. That’s God’s remedy. It’s a perfect remedy it’s a loving remedy it’s a merciful remedy but it does not compromise with sin or with Satan. God will never, never never do that. Out of the new creation God is going to produce a new people. This is our final proclamation a glorious one. It’s Titus 2:11–14. We have a practice when we have a meal we say our grace which we won’t say now we were in a meeting once and I said to Ruth "Come up and say the grace," and she started to giggle. I mean, she couldn’t stop giggling. I said, "What’s the matter?" She said, "All these people are hungry and you’re saying grace in front of them!"

So anyhow, we won’t repeat our grace but at the end of our grace we always proclaim a scripture. The one that gets in first makes the proclamation. This is one of our proclamations, Titus 2:11–14: The grace of God that brings salvation has appeared to all men teaching us that denying ungodliness and worldly lusts we should live soberly, righteously and godly in the present age looking for the blessed hope and glorious appearing of our great God and Savior Jesus Christ who gave Himself for us that He might redeem us from every lawless deed and purify for Himself His own special people, zealous for good works. So what is God going to get out of history? His own special people. That’s why He tolerates all the wickedness and the tragedy and the suffering. Because God is waiting till everyone He has chosen for Himself has come to Christ.

You see, God has His chosen ones and they come from every tribe, nation, people and tongue. Until they’ve all been reached we cannot rest. That’s God’s remedy, a new creation that will produce a new kind of people that will be fit to share the throne with Jesus. Brothers and sisters remember that’s our high calling. God is going to put you through everything necessary in this life every kind of potential suffering or trouble or pressure to fit you to become a ruler with Jesus. Shall we pray in closing?

O God, we thank you that your word is so clear, so plain. There’s no if’s, there’s no but’s. You’ve made the way of life and righteousness so clear that even fools will not stumble in it. Lord, we remember what Jesus said ‘Narrow is the gate and difficult is the way that leads to life and those who find it are few.’ We pray tonight for all those gathered here, for ourselves too that we will pass through the narrow gate and walk the difficult way until we have finished our course. Give us a vision, Lord each of us of the elect of the chosen ones. Many of them have not yet heard the word of God. Many of them do not yet have scripture in their own language. But Lord, we want to share Paul’s vision. I endure all things for the sake of the elect that they also may obtain the salvation Which is in Christ Jesus with eternal glory. And all Gods' people said: Amen. God bless you.