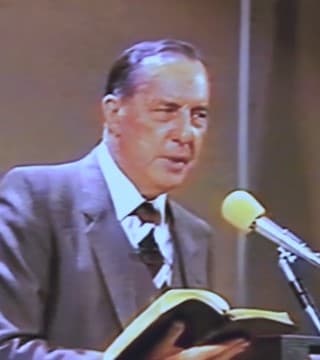 TOPICS: Why Should We Be Longing?, Second Coming

This is an excerpt from: Why Should We Be Longing for Jesus' Appearing?
Now I just want to read a couple of passages from the psalms to close tonight, trying to show you that if you’re not excited, nature is. From Psalm 96 first and then from Psalm 98. Psalm 96:11–13. Let the heavens rejoice, and let the earth be glad; let the sea roar, and all its fullness. That’s tremendous when the sea starts to roar. You remember that Jesus said as one of the signs immediately prior to His return, the sea and its waves roaring and men’s hearts failing them for fear. Those two passages are directly related. Let the sea roar, and all its fullness. Let the field be joyful, and all that is in it. Then all the trees of the wood will rejoice before the Lord. For He is coming, He is coming to judge the earth. He shall judge the world with righteousness and the peoples with His truth. You see, there is no substitute for problems but righteousness. Whether it’s our personal problems, whether it’s the problems of humanity, the problems of this earth. The only solution is righteousness. And righteousness will not be established until the Lord returns.

I think Psalm 98 is a little bit more vivid. Verses 7–9. Psalm 98:7–9. Let the sea roar, and all its fullness. I read that and it’s almost as if I were kind of setting the stage. You know, let the sea roar. Because God said it, I can say it with faith. If it was just my thinking it would have no effect. But, it’s almost like I’m releasing the sea to do its job. That’s how I read the Bible. When I pray, much of my praying is releasing God’s word into a situation. Understand? I proclaim what God has said. For instance, about the situation in Israel in the Middle East. One interesting Scripture says: The scepter of wickedness shall not remain over the land allotted to the righteous. There’s a lot to that. I’m not going to go into a prophetic discourse on the situation in the Middle East. But the scepter of wickedness will not remain over the land allotted to the righteous. I declare that into the unseen world. Because I say it with faith and it’s in the word of God, it has the same effect as if God said it. Can you accept that?

I hope that doesn’t seem to be bragging, but that’s the truth of the matter. When God’s faith flows through His Word, it doesn’t matter whether He says it or I say it or you say it. I’m going to read this with real faith. Let the sea roar and all its fullness; the world and those who dwell in it. Let the rivers clap their hands. Can you imagine the rivers clapping their hands? Isn’t that beautiful? I picture the rivers running and the wind blowing and foam coming up like this. And the rivers are clapping their hands. Let the hills be joyful, together before the Lord; Why? For He is coming to judge the earth. With righteousness He shall judge the world – notice the emphasis on righteousness. And the peoples with equity, or fairness. Let me ask you frankly and I’m closing my message: Could it be that nature is more excited than the Church? Isn’t that rather tragic? If you’re not excited about the coming of the Lord, you’re missing an awful lot. And you’re probably living in a level of faith that’s much below what God has for you. You’re probably, frankly, living in the level of your problems.

I want to suggest to you tonight that you need to lay hold of this fact that this is the blessed hope that’s set before the Church. It is the consummation of our personal salvation. The consummation of our union with the Lord and with one another. The consummation of redemption for this earth, for creation. That’s exciting. One of the things that impresses me is how much depends upon the Church. After all, we’re the body of Christ. And God is not going to do anything in the earth that bypasses His body. Because it would dishonor the head, Jesus. We need to rise to our destiny. We need to spend less time in front of the television and more time in front of the Bible. You know, I’ve told people in many places lately: If you want to be a real spiritual giant, I can tell you the way. You just need to exchange two things. Trade one for the other. The two things are: The amount of time you spend with your Bible and the amount of time you spend in front of the television. Just exchange them and you’ll become super-spiritual. Is that right? It’s not true of all of you, it’s true of most of you.

I’m not anti-television, but it doesn’t tell you some of the things the Bible tells you, believe me. I would like to just consider for a moment that we would give our thoughts to what I’ve been saying, to the theme I’ve been presenting. And really face up to what I’ve said. I would like to ask that just for a moment or two you bow your heads in prayer. And shut yourself in with the Lord and with the word that you’ve heard. Consider what I’ve been teaching. I believe, really, I can say it’s all straight from the Bible. Then I’d like to say: Perhaps you realize here tonight that you’re not as excited as you ought to be about the coming of the Lord. That you’ve let other things come between you and this glorious hope. That you’re perhaps much too deeply embedded in the things of this world and in your personal problems.

And tonight you’d like to ask the Lord for His forgiveness. For His mercy. And for a spiritual renewal in your life where your priorities will be in line with God’s. If you’d like to make that decision and offer that prayer, I’d like you just to raise your hand for a moment as a token. Well, that’s tremendous, praise God. Those of you that have raised your hand, which are the great majority, will you stand up? If you’ve raised your hand and you want to offer that prayer, that's no condemnation of those that didn’t raise their hand, believe me. We shouldn’t all have to raise our hands. Now, we’re going to close now with a prayer. I’m going to offer these words to you but they’ll be of no effect unless you say them from your heart to the Lord. Say these words:

Lord Jesus Christ, I believe you are coming in glory. I believe this is the blessed hope set before us. But Lord, that hope has become rather dim in my thinking and low in my priorities. And I’ve given too much attention to other things. Lord, I want to ask You to forgive me, to release me from any bondage. And to make the reality of Your coming very vivid for me. And help me, Lord, to make proper preparation. That I may be ready for anything that’s coming on the earth. And that I may stand before You, the Son of man. To see You in Your glory. And be transformed into Your likeness. In Jesus’ name. Amen.