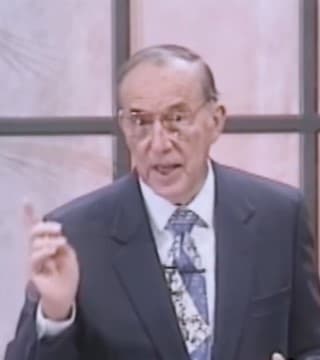 This is an excerpt from: You Can Come Through Victorious
I’m going to suggest to you tonight quite briefly three main purposes of God, clearly revealed in Scripture, which are His will. The purposes that He is working out in the earth right now. We’ll begin with Matthew 6:10. This is really the supreme statement of God’s purpose in the earth at this time. It’s part of what we call the Lord’s Prayer. Just the first two verses. The strange thing is, I preached on this through central Europe. In Hungary, Czechoslovakia and Germany. And in every place, I intended to tell them what the will of God was. And in every place, I was arrested by the opening words. This is the Lord’s Prayer: Our Father in heaven. And I said to those dear people: I hope you understand you have a Father. You’re not abandoned, you’re not left to yourself, you’re not of just a little worth. If you believe in Jesus, you’re a member of the best family on earth. You never need to be downcast you never need to feel inferior.

In one place, in Czechoslovakia, when I began to say that the women in the front row began to weep. I said, Well, I know what their problem is. And I can’t just go on preaching and leave them weeping, when I have the answer to their problem. So I began to speak about people who feel rejected, unworthy. They don’t have any sense of self-worth. I said your problem is, if you’re a child of God you don’t know who you really are. Because you have a Father - you may have no earthly father, but you have a Father in heaven who loves you, is all powerful and is planning the best for you right now. You belong to the best family on earth. And I said in each of those places How many of you really feel abandoned, unwanted, worthless? And in every one of those places a majority of the people stood to their feet.

So I think I have to do the same here. It may not apply, but I know at least one, because one lady came to me. You feel you don’t have a father. You feel lonely, abandoned. You don’t feel you’re worth much. You often wonder why am I alive, what am I here for? You have a very low sense of self-worth. One of the reasons for that is the breakup of the family. In central Europe it’s also the results of World War II. Now, I want to tell you God has a remedy. I’m not going to spend long on this, but I’m not going to pass you by. You’ve got to be humble enough to indicate your real need here this evening. If you are in that category, you may be Christian, you may be born again, you may speak in tongues, but you don’t have any sense of self worth. You wonder what you’re here for, you feel like a piece of flotsam, just drifting on the water. God has a remedy for you.

Let me tell you this story before I finish. This was such an illustration to me. In the days when there was still a Tennessee-Georgia Christian Camp and some of you probably will remember those days, one or two of you. I was there to speak and I was walking to the auditorium and I was in danger of being late. I was walking rather fast and there was a lady walking just as fast in the opposite direction and we collided. So when we picked ourselves up she said, Oh Mr. Prince, I was praying that if God wanted us to meet, we’d meet. And I said, We have met, what can I do for you? And then I said, I can only give you two minutes, because I have to be there to preach. She began to tell me her problem. I listened for about a minute and I said I’ve only got one minute more. I know the answer to your problem. I want you to pray this prayer after me. I didn’t tell her what I was going to pray. In fact, I didn’t know what I was going to pray. But I said, Pray like this. And I said something like this:

I said, Good-bye, I have to go. About a month later I got a letter from that lady. And she described the situation so I’d know who was writing. She said, I just want to tell you, Mr. Prince, praying that prayer with you has completely changed my whole life. I saw something which I’ve lived with ever since. By that short, simple prayer of one minute she had passed from rejection to acceptance. And, you can do the same. If you here this evening feel in some way rejected, unwanted, second-class. I just want to tell you God has got no second-class children.

If you would like me to lead you in a prayer by which you can pass as that lady did into the assurance that you’re accepted by your Father in heaven, that you’re a member of His family that He really loves you, He nows your name, He plans the best for you. If you would like a transition like that, if you need it, please stand to your feet right where you are just now. And I’ll lead you in a prayer - if nobody stands that’s all right. All right, wherever you are, you need this transition. We’ll take a few moments, don’t let pride stand in your way. People may know you, you may be a member of a well known church, but that doesn’t follow that you really know that God loves you individually and personally. And, that you love God. I’ve discovered it’s harder for Christians to realize that God loves us, than it is to tell Him that we love Him.

We were dealing just recently with a man who’s almost my age. He’s been a missionary all his life in Zambia. A man with tremendous achievements. This was a prayer conference and he humbled himself. He said, You know, I can speak to others, I can help others, but God never speaks to me personally. I said, We’ll pray for you. A little while later he stood up and tears were streaming down his cheeks.

Now this is a man well over seventy. He been a Christian all his life. And he said, God has just spoken to me and He said, ‘I love you.’ He had to live all that time to know individually and personally that God loved him. So, those of you who are standing, I want to tell you God loves you. Individually and personally. You’re not second-class. You’re not unwanted, you’re not without value. You’re more valuable to God than all the things He’s created in the universe, because you’re in Jesus Christ. I don’t have a prayer planned but just pray this after me and I’ll trust the Lord. Say it out loud, you don’t have to shout. But say it loud enough to hear yourself say it. You say: