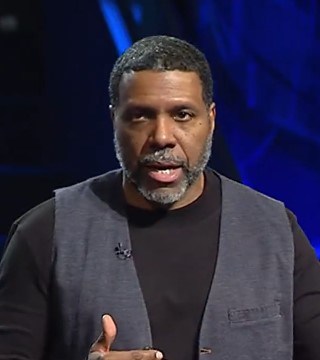 Father, we thank you for this, another opportunity to minister to these your precious sheep. Thank you, Lord, that revelation knowledge will flow freely, uninterrupted and unhindered by a satanic or demonic force. And Father, I pray that you will speak through my vocal cords and think through my mind. None of me and all of you. It's in Jesus's name we pray, and everybody said, "Amen," and amen.

Well, welcome to another Wednesday night Bible study. We have been talking about character and last week we talked about godly character and we really related it to the fruit of the Spirit but what we wanna talk about today is a lot of times when people talk character, they really mean integrity. Now let me say that again. A lot of times, people when they talk character, they really mean integrity. So today, we're gonna look at integrity versus character and talk about exactly what that is. So if you have your Bibles, go with me to the book of 1 Kings chapter 9 and verse 4. 1 Kings chapter 9 and verse 4. I really wanna go slow on this because I want you to see the difference. For quite some time in my life when I was talking about... in a lot of places, I was talking about integrity, I really meant character. And then sometimes when I was talking about character, it lined up correctly but there is a distinction here that needs to be made where this is concerned.

So let's start off with some definitions. Let's look at the word "integrity" first. And give you just some first insight on that. Integrity, what it does, it adheres to a code of conduct. Integrity adheres to a code of conduct. Integrity, what it does, it says, "Well, here's what I've decided to live by," and for us as Christians we've decided to live by the Word, we've decided to live by the principles of God's Word and the principles of God's grace, and so integrity says, you know, I'm going to adhere to that. I'm gonna adhere to that standard. I am gonna adhere to that code. You see this in 1 Kings chapter 9, verse 4. David is really demonstrating this in integrity. He says, in chapter 9, verse 4, he says: "And if thou will walk before me, as David thy father walked, in integrity of heart, and in uprightness," all right, integrity of heart and uprightness, what? "To do according to all that I have commanded thee, and will keep my statutes and my judgments".

You know, it has been said that a person will never go past his character, that a person will never go past his character. A lot of times, people wonder, "Well, how come I hadn't reached this stage in my career or in my life"? I guarantee it is a character issue because character is sandwiched with habits and destiny. And right in the middle of habits and destiny you'll find character. So, you know, first of all, one of the reasons we're talking about this is that you can always be a victim of your character, you can always have to, character is like a ceiling. You can't go past it. You can't go past your character, so character is doing what's right because it's right and then doing it right. Character is also what people have come to expect from you. So it's something that flowed out of you and then once it's on the outside and people can see it, then, you know, your character is now something that has, you know, people have come to expect from you.

Now, let's deal a little bit with integrity here. Integrity is associated with words like honesty, respect. It's associated with words like, you know, generating trust or responsibility. One of the main things that I've always contributed to integrity is keeping promises. Keeping promises, helping others, you see. And so, what happens is we've got to understand the place of integrity and not to get it so confused with the actions of character. Look at this in Proverbs chapter 10:9. What does the Bible have to say about integrity? Proverbs chapter 10 and verse 9, he says, "He that walketh uprightly," that's integrity. "He that walketh uprightly walketh surely". So there's an amazing result that comes with walking in integrity. He says, "But he that perverteth his ways, he shall be known".

Look at this Scripture in Proverbs chapter 28 and verse 6. Proverbs chapter 28 and verse 6. He says, "Better is the poor that walketh in his uprightness," so he says the guy can be poor but he has integrity, "than he that is perverse in his ways," in other words, he has no integrity, "though he be rich". So he's rich with no integrity and there's a guy that's poor with integrity. And he says, "You would be better off being poor with your integrity than to be rich with no integrity". Now, that leads me to think, "Well, you know, will my integrity produce things in my life? Will my integrity get the attention of heaven"? I believe so, I believe so. Let's look at some Scriptures here and I'll show you an illustration of that in a moment. Proverbs 11:3. Proverbs chapter 11 and verse 3. He says, "The integrity of the upright shall guide them".

So first of all, I see that when you're walking in integrity, you have a guide. The guy who doesn't have any integrity, the guidance that's needed for his life, to me that's one of the most important things you can have, as a believer, you want to have integrity that will guide you. Your integrity will guide you. Ultimately, your integrity is gonna guide you into good character. Your integrity is gonna guide you into the type of actions you perform, the type of character that you display, okay? Now, let's look at Genesis chapter 20. I thought about this story here and very interesting, something here, that there was a guy that probably could have died except his integrity got him out of a situation. The story about Abraham in Genesis chapter 20 and verse 1: "And Abraham journeyed from thence towards the south country, and he dwelled between Kadesh and Shur, and sojourned in Gerar. And Abraham said of Sarah his wife, She is my sister".

Now, you know, it was his half-sister but, you know, some people think, "Well, you know, that's a half a truth or a half a lie, but, you know, she is my sister". They were half sisters and brothers. "And then he said, She is my sister, and Abimelech the king of Gerar sent, and took Sarah". I mean, check it out. They asked, "Well, who is she"? He said, "It's your sister". Think about that now. No explanation. He says, "That's my sister". And he said it with the intent to deceive as well, let's make sure we understand that. And verse 3 says: "But God came to Abimelech in a dream by night, and said to him, Behold, thou art but a dead man". Now, stop right there. I mean, he finally gets to hear the voice of God and here's what he hears: "This night are you a dead man". Oh man, c'mon. I don't know how many of you have ever heard the voice of God but I can guarantee you you don't wanna hear God's voice come to you and say, "This night you are a dead man".

Well, let's continue on. He says, "For the woman which thou hast taken; she is a man's wife". All right now, check this out 'cause remember, he said that's his sister. And God says, "You know what, this night you're a dead man because you're getting ready to mess with this man's wife who I'm in covenant with". "But Abimelech had not come near her: and he said, Lord, will thou slay also a righteous nation"? Verse 5: "Said he not unto me, She is my sister? And she, even she said herself, said, He is my brother". Now watch this, he said, "In the integrity of my heart and the innocency of my hands have I done this". In other words, he's like, "There was no intention at all for me to do this with deception. I did this honestly. I did it with the integrity of my heart. They said they were sister and brother. I had no idea that they were married," and God said, watch this. "God said unto him in a dream, Yea, I know that thou did this in the integrity of thy heart".

Let me show you what Daniel did in Daniel 1:8. Daniel had made a decision that he was gonna fast from certain things, and you know, he had character to stick with it. So in Daniel 1:8, "But Daniel purposed in his heart that he would not defile himself with the portion of the king's meat, nor with the wine which he drank: therefore he requested of the prince of the eunuch that he might not defile himself". And so, you know, he could have easily just, "Oh, it ain't nothing but food," but the character to do what he said he was gonna do. The character to carry out that integrity and conviction of his heart, that's a powerful thing. And he demonstrated it, and that was a choice that he made. It was a decision he made. He made a decision to carry his self a certain way and had the character to bring it or to bring it to pass in his life.

Look at another illustration, Romans 5, verse 3 through 4 in the New Living Translation. Romans 5:3-4 in the New Living Translation. He says, "We can rejoice, too, when we run into problems and trials, for we know that they help us develop endurance". And then he says, "The endurance develops strength of character". So will God allow certain trials to come into your life to help you to develop in character? Yeah, I believe certain things happen that become opportunities to develop character. And he says your "endurance develops strength of character, and your character strengthens our confident and our hope of salvation". And so, yeah, I believe there are some things that happen in our life that will strengthen our character. And I just believe that once you go through certain things and it strengthens your character, then, you know, you doing something about things is gonna be strengthened even more, doing the right thing. You doing the right thing.