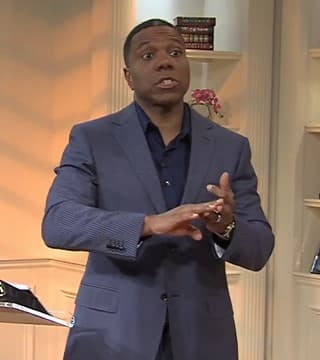 Father, we thank you for this, another opportunity to minister to these your precious sheep. Thank you, Lord, that revelation knowledge will flow freely, uninterrupted and unhindered by any satanic or demonic force. And Father, I pray that you will speak through my vocal cords and think through my mind. None of me and all of you, it's in Jesus' name we pray, and everybody said, "Amen". Praise God.

Well, this morning if you have your Bibles, we're gonna spend a tremendous amount of time in it, because I want to rightly divide the Word of God where the Old Testament and the New Testament is concerned but here's what I want you to get. Here's the twist on this. I wanna spend some time rightly dividing the Old Testament because one of the things we've recently learned is that Matthew, Mark, Luke, and John are books that were written about the life of Jesus and in the midst of looking at the life of Jesus, Matthew, Mark, Luke, and John also revealed Jesus in the two ministries that he was operating in.

Number one, the first ministry of Jesus was to reveal to us the real Spirit behind the law of Moses. And then the second ministry of Jesus was to, through prophecy, begin to lay out the plan and to bring us into a new covenant, a grace system, a system where we are now calling God Daddy and not just God. And so, we see then that the New Testament did not go into effect until after the death of Jesus Christ. And so that's important because now you've got to rightly discern between what happened in Matthew, Mark, Luke, and John where Jesus was fulfilling the law and then also laying out that new way of living, and you've got to rightly divide that with the beginning of the new covenant, that new way of grace that didn't happen until after he died. And so, we're gonna do something similar where the Old Testament is concerned. We wanna rightly divide it to show you that there are some things that happened in the Old Testament that we need to make clear distinction on.

So if you don't know that and if you don't know how to rightly divide that, you could be going to the old covenant, picking something out and trying to teach it to new covenant people and it's no longer the truth under the new covenant where it was the truth under the old covenant. And besides all of that, when we do that, when we try to operate in something that you found in the Old Testament and try to make it true in the New Testament, then you don't get any results, well, that's what hurts my heart, is that people are going around and they're pulling the wrong thing out and trying to stand on it and it's been marked obsolete. It's like trying to use a canceled credit card. You try to go in and you try to use that card to exchange or to make an exchange or a purchase and it's obsolete. It's no longer working. And so it's the same thing. You go to the Old Testament, you try to take something and use it today and it's no longer working. That account number's been canceled. And so transactions can't take place.

So this is why I'm doing this today. So pray for me that God will give me the correct way to articulate it and the correct way to teach this and I pray that it will be a blessing to you. Now, let's begin in Luke chapter 16, verse 16, and for the first 30 minutes we're just gonna look at the Word. Just pay attention to what it says. Now you're gonna have to let go of what your Aunt Jenny told you, what Pookie and 'em told you. If we are Christians and we say we believe the Word of God, then bless God, let's do it. Let's find out what's in the Word of God and let's believe the Word of God. Luke chapter 16 and verse 16. Now, so we're talking about understanding and rightly dividing the Old Testament. So the whole of the Bible is divided into two parts. We know that. The whole of the Bible, two major parts. It's divided in the Old Testament or covenant and the New Testament or covenant. Now, the Old Testament, according to the Bible, is made up of the law and the prophets.

Now, I used to remember hearing that said when I was in my Methodist church growing up: the law and the prophets. And nobody really offered to me an explanation of what that meant. But the whole of the Old Testament is divided up with the law and it's made up of the law and the prophets. Now, look at Luke 16:16. I just want you to know I'm not just, you know, sitting up here, running my mouth. Everything I'm sharing with you today comes from the Word of God. And we've got to see where it fits in our life. So wake up, go get you some coffee. I gotta take you to school for a minute before we get to shouting and jerking and feeling an unction. Let's find out what this Word says. Luke 16:16, he says: "The law and the prophets were until John". Now, that's a very important statement. "Since that time the kingdom of God is preached, and every man presses into it".

Look at Joshua chapter 23. Joshua chapter 23 and verse 6. I thought this was interesting that this would be so clearly seen in the Bible so that when we begin to look at this and begin to understand this, that we see what Joshua said about Moses, the law-giver. Joshua chapter 23 and verse 6. If you were here, I would say, "If you're there, say, 'Amen.'" Now, look at verse 6 here. Now, again, we're sticking with what's in the Bible. He says, "But ye therefore very courageous, be ye therefore," he said. "Be ye therefore very courageous to keep and to do all that is written," watch this, "in the book of the law of Moses". "In the book of the law of Moses".

Now, but then the book of the law started, we know, it started in Exodus because it is in this book that God made the covenant with Israel. It was in this book of Exodus that God declared things with Israel. And, in fact, you can go to Hebrews chapter 8 and you can see this. In Hebrews chapter 8, he makes it very clear that, verse 8, he says this. He says: "For finding fault with them, he saith, Behold, the days come, saith the Lord, when I will make a new covenant with the house of Israel and with the house of Judah". Now, he's talking about making a new covenant. What was the old covenant? The old covenant was in Exodus to Deuteronomy. It was the covenant of the law that he made with the house of Israel. He says: "Not according to the covenant that I made with their fathers," again, it is referring to the book of the law, the covenant of the law, "when I took them by the hand and led them out of the land of Egypt; because they continued not in my covenant, and I regarded them not".

Now, I got to tell you something. I really wish somebody would have told me this when I became a Christian. I didn't know that, and so I didn't know how to rightly divide. I was just used to going to the Bible, flipping it, "Oh, here's a Scripture," and then I'd try to make it fit with my life today. So now listen to me very carefully. This is paramount that we see this and understand this. The law, book of Moses, I'm just gonna be repetitive for a moment, make sure you got it. The law, the book of Moses, and the prophets, is the whole of the Old Testament were operated until the time of John the Baptist.

Now, I'm telling you, this is crucial information. Hang in there with me, now. I'm not just, you know, trying to turn this into a seminary school. I'm trying to get you to understand, first of all, understand what's going on and then show you why you have to understand. You'd be amazed at some of the things that we have allowed happen in our lives because we lack this understanding. So once again, the books of the prophets was from Judges to what? To Malachi. Now, when we talk about the prophets, it includes personalities like Samuel and what he wrote, Nehemiah, Jeremiah, David, Ezekiel, Elijah, Elisha, it refers to Israel, Isaiah, Hosea, Obadiah, and it just goes on and on, all of those prophets.

Now, look at what the Holy Ghost says about their operation now that Jesus has come. Now that Jesus has come, now what does the Bible say about their operation? Look at Hebrews chapter 1. Hebrews chapter 1 and let's look at 1 through 2. Hebrews chapter 1, 1 through 2. Now, pay attention to this. Look at this: "God, who at sundry times and in divers manners spake in times past unto the fathers by the prophets". So in times past. This is what he did in times past. He spoke to the fathers by the prophets. Now, watch the change. "Hath in these last days spoken unto us by his Son". In times past he spoke through the prophets, but in today's time, right now, he speaks to us "by his Son, whom he has appointed heir of all things, by whom also he's made the worlds".

Now, why is this important? Because some people have more confidence in what a prophet has to say to you and don't even understand that God's not speaking through a prophet anymore, like he's speaking through Jesus. Now, a prophet today, yeah, I'm not saying there's no such thing as prophets today. I'm saying that God's gonna lead and guide you through his Son Jesus Christ and by the Holy Spirit, whereas before, a lot of the guidance was provided through the prophets. Now, today when somebody prophesies, they're gonna prophesy something that will give you comfort and exhortation and direction, okay? But you've got to understand there's a distinction now between what the Bible says... spake in times past unto the fathers, how? He did it by the prophets. But he says, today, he speaks to us by and through his sons, so there's a change.

All right, now, watch this. Why does God talk to believers as though he is speaking to Jesus Christ? "Show me the Scripture, Pastor. You said you was gonna show me everything". Look at Acts chapter 17 and verse 28. Acts 17 and 28. Watch carefully. "For in Jesus we live". Oh, so if he gonna speak to me and I live in Jesus, he gotta speak to Jesus. "In Jesus we live, and we," what? "Move". And we what? "We have our being; as certain also of your poets have said, for we are also his offspring".