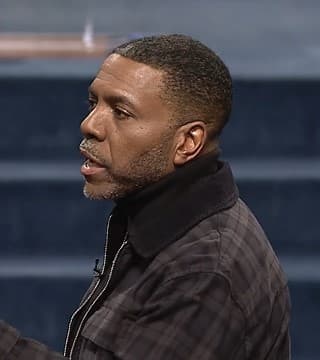 If you have your Bible, go with me to the book of Matthew chapter 5, verse 8. We're going to look at it in the King James and The Message. We've been talking about clarity versus spiritual blindness. And I have a thought this morning that blindness in and of itself is not necessarily bad. It all depends on what you're blind to. I can be blind to something negative and then it doesn't affect me. But what happens when I'm blind to something that is impactful to my life? You know, I can be blind to the operations of a cult versus being blind to what Jesus has already done for me.

So I think to dig a little deeper, it's what is it that you're blind to? There are certain things you might want to thank God you're blind to. Certain things that's going on, folks are like, "Well, I don't know nothing about that", okay. But to be blind to something so significant as the grace of God, and to be blind to something so important as to what Jesus has done and what it means, and the significance of his death, his burial and his resurrection, the significance of having a relationship with him and knowing him personally for yourself every single day, to be blind to that, may put you in a spot where you're struggling unnecessarily, where you're going through emotional problems because of what you don't know and you can't see, because of the lack of clarity, you sweat to try to get something that you don't even have to sweat to get.

Being blind to this very truth of the gospel of Jesus Christ, the light of God, then leaves you in a position of pain, of not being successful. It leaves you in a position of struggle after struggle until you're convinced that all of life is a struggle. Sure, the Bible says they that live godly shall suffer persecution, but it's not suffering of persecution all your life, but it also talks about the good life. Turn to your neighbor and say, "I live the good life".

So Matthew chapter 5, we talk about clarity. And I understand the basic meaning of clarity: a clearness. Clarity means clearness. It's understanding, it's precision, it's simplicity, it's exactness. But I'm talking about having clarity to be able to see Jesus clearly, clarity to be able to see what he's accomplished. I define clarity as being able to see things through the eyes of grace, to be able to see Jesus and what he has done and what he has accomplished in your life. I told you before Christianity is not a religion. It is a relationship with Jesus. And until it stops being a religion, then you will never know what Christianity was about.

And you know, you're constantly in a state of condemnation and constantly thinking that God's mad at you. The only way you're going to think God is mad at you is you can't see him. You're not seeing him clearly. God's not coming to beat you up, to destroy you, to punish you, that's not God. That's the result of spiritual blindness. Look at this in The Message Bible, Matthew chapter 5:8 in The Message Bible. Here's what he's talking about, especially when you see this thing, pure. Most people try to define a pure in heart as one that has perfect behavior. A pure heart is not necessarily a flawless heart.

I remember when Oral Roberts was staying at my home, and we were downstairs, and he was talking to me and the Word of the Lord came to me. He knew I was struggling here in this area and he says, "God wants you to know you have a pure heart". And I looked at him and I said, "No, I don't". He said, and it kind of threw him for a moment. He says, "Yes, you do. You have a pure heart". And I'm thinking, "No, I don't". Then he says, "Well, tell me what you think it is"? "Perfect", I said. He says, "No, that ain't what it is". And he broke down crying.

He says, "A pure". He says, "The reason why you have a pure heart is 'cause you won't quit". He says, "You keep going after it. You won't give up". And just began to pray in the Holy Spirit over me, and I believe that was a part of what helped to bring me to the point where I can see God. Look what he says here in The Message. He says, "You're blessed when you get your inside world, you're blessed when you get your inside world, your inside world, that's your mind and heart, put right". When I can get an understanding and clarity in my mind, when I can get clarity in my heart, when I can deal with that, he says, "then you can see God in the outside world".

Now, look at Proverbs chapter 29, verse 18. Let's look at this in the King James and The Message. Clearness, being able to see what Jesus has made available, being able to see what Jesus has accomplished in our lives, wanting a relationship with him, wanting to know him more than anything, ready to resign from image building to building a personal relationship with the heavenly Father. Proverbs 29:18 says, let's read it together with me. Ready, read. "Where there is no vision, the people perish, but he that keepeth the law, happy is he".

You see all last year, I think in the Grace Convention, I think we're over a hundred sessions I believe. Yeah, are we at a hundred yet, over a hundred sessions? A hundred sessions have been given birth to on the subject of grace. Why? Because we're trying to produce something for the world to be able to attend to. The unveiling of Jesus Christ, the unveiling of what his blood has made available to us, the unveiling of what his broken body has done for us, to attend to that and to understand that, and to see that clearly, he says you will be most blessed because you're no longer trying to fast for 40 days to get God to move. You know he's already moved. Amen.

Can I show you this Scripture? We've seen it a hundred times but I want to show it to you one more time. Galatians 2:16 in the NLT 'cause it says it so clearly. I was at a Baptist convention and I showed this Scripture, and I tell you what, they were so convinced they said please come back and teach us because they read it. They read it. Because all our lives in church, we've been told you got to do this in order for God to do that. You got to do that in order... if you don't keep the commandments you're not going to be impressed with God. We were in darkness, spiritual blindness.

You know, the objective of Jesus and the objective of grace is to get us to be holy. Grace doesn't cover sin. Grace delivers you from sin. You can't say, "Well, I'm under grace, so this allows me to do this". No, if you're really under grace or under Jesus Christ, he is in the process of transforming you out of darkness into the marvelous life where you won't do what you used to do. He says, "Yet we know that a person is made right with God by faith in Jesus Christ, not by obeying the law. And we have believed in Christ Jesus so that we might be made right with God because of our faith in Christ".

Why do I go to church? I go to church so I can continue to get more clarity and precision on Jesus, which allows me to have faith in what I know. You did not come to church for me to come out here to perform, do you? We got to examine what we're doing. We're so content at having church, the words don't even have any meaning anymore. I'll prove it to you. Take a good song with a good beat and it can be saying something that ain't even biblically sound, and you don't even recognize it because that's having church instead of having relationship with Jesus, we did it for years. "Pass me not, oh, gentle Savior. Hear my humble cry". Thought that was really impressive with God, and you know what heaven was doing? "Are you kidding me? Did I not tell them that I will never leave them nor forsake them? I will be with them even to the end of the world and they still don't have clarity on what I promised? So they're still living life as if I'm one day gon' pass 'em by".

So that's why you come to church. That's why you're here this morning, hopefully, to learn some more, to get some more. I got a relationship with Jesus and I got a place I can come back where I can get some precision and some clarity. And I'll tell you, you need precision if you're going to open that Bible. You just can't open the Bible and start reading. I am convinced of that. I'm convinced that a lot of people are confused today because they said, you need to read your Bible. I don't know how to read my Bible. But that's why it says, "I gave you apostles, and prophets, and pastors, and teachers, and evangelists, for the perfecting of the saints so they can do the work of the ministry which is building up the body of Christ", but we can't build up the body of Christ 'cause we don't understand the work of the ministry because we don't even know the purpose for the fivefold ministry gift.

You thought the fivefold ministry gift was given to show an example of perfection. Ain't nobody in the pulpit perfect. And I wouldn't want to follow nobody in the pulpit that's perfect, I want somebody who know what I'm talking about. I want somebody who would've been beat up, and messed up and got up and went across the finish line and can tell me how they did it. But because we didn't have clarity, we kept looking for perfection and soon as you found out that dude in the pulpit wasn't perfect, then you left looking for somebody that... it don't exist.

You know, God come to you and say, "Africa, you better hold up now, don't move there". You just got a little bit. So stay on in there until you get a complete sentence. Clarity. Clarity, man. We were talking last week and it's like real spiritual maturity is never coming to a place where you say I don't need God no more. Real spiritual maturity is knowing that wherever you are in your life, you still have a need for Jesus. I can get with somebody like that. I can't deal with all this little deep stuff where people running around and they act like they so flawless they don't need God.