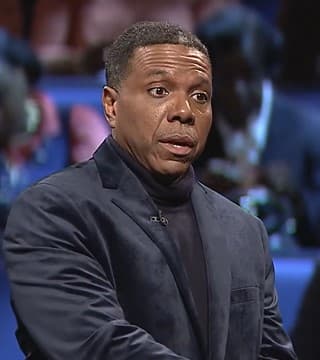 If you have your Bibles with you this morning, let's go with me to the book of Galatians chapter 2, verse 16 again. You ought to have a big dent there by now. Galatians chapter 2:16 out of the New Living Translation. I'm so excited about what I'm about to share, I probably need to stay in this pulpit this morning. I'm gonna do the best that I can. I need to remain calm so I can get the message to you, amen? Galatians chapter 2. Now, we started back some weeks ago dealing with the series "Ten Ways to Respond to the Finished Works of Jesus Christ".

So, if healing has been made available, your faith will take possession of that. Your deliverance has been made available. You're not begging God to deliver you. He's already delivered you 2,000 years ago, so you use your faith to take possession, take it into your life so you can see it today. And so, we're talking about how to respond to the finished works of Jesus. What does it look like? You know, instead of me trying to get in religious activity, "You know, I gotta fast five more days so I can get God to do something".

Well, God's already done it. You're not gonna ever be able to get God to do what he's already done, amen? And you're never gonna be able to get God to do what he told you to do, so the things he told you to do are gonna be you operating the authority and the things he's already done it's gonna be you releasing your faith to get a hold of it. And so, we've been talking about the number one way to respond to the finished works of Jesus is to believe in the love that God has for you, because if you don't believe God loves you, you won't believe what he has promised you or what he says to you.

That was the rich young ruler who came to Jesus and asked him, "What do I have to do to have eternal life"? And Jesus responded to him under the law and said, "You gotta keep the commandments in order to be right with God". But now under this covenant of grace, under this dispensation of grace where the Bible says that sin shall not have dominion over you for you're no longer under the law but you're under grace. Say that aloud, "I'm under grace". Under grace you're not made right with God by obeying the law. Under grace you're made right with God by your faith in the finished works of Jesus Christ, so you're made right with God not by your doing but by your believing in what Jesus has already done. If you understand that say, "Amen".

The Bible says that the devil comes to kill, steal, and destroy and most of the stuff you're blaming God for are the things that he's responsible for: killing, stealing, and destroying. But Jesus said, "I didn't come to kill, to steal, and destroy". He says, "I came that you might have", what? "Life and have it", how? "More abundantly". So, it's especially important if we're going to get our belief system straight about the Christians' freedom from judgment and this freedom from punishment. And so, you have a Christian who gets sick, for example, and then he loses his job, and then his wife divorces him, and then his friends start trying to connect the dots to find out why God did this to him. Sounds just like Job all over again, right? And today we're still quick to put the God stamp on everything that happens to us, and God doesn't want the credit.

A drunk driver rams into someone's car. A two-year-old girl dies. "Well, the Lord took her. The Lord took her", some would say. "The Lord took the little flower out of the garden and replanted it in heaven. The Lord giveth, and the Lord taketh away. Bless it". That's so outta context, but that's what some people will say. Now, I know God is sovereign, but God wasn't drunk that day. Are you hearing me? God wasn't steering the car into the little girl's way, right? The world teaches overindulgence is okay, and we live in a society that overindulgence is fine, and so what happens is the flesh... we're looking at all the other folks. So, the world, now we look at the flesh. The flesh craves also. You know, it craves the alcohol to drown out the sorrows that somebody might be going through, and we're tempted to go ahead and to drive drunk because it's no big deal. Nobody is saying that's the issue. It was God.

Now, listen to me carefully. God allowed that circumstance, but he didn't cause it. Follow me. God never treats us with cruelty. God does not inflict wounds on his own children. God does not give his children cancer. God does not cause heart attacks for his children, so if stuff like that happens stop saying, "Well, it must have been the Lord's will". It is not. But as long as a loving father... he is a loving Father. He comforts and helps us in the midst of earthly turmoil. You're gonna have issues to come up, and you can depend on God comforting you through those issues.

Some of y'all going through rough stuff right now. You need to pause, and you need to reflect just a moment, "How am I able to make it through that"? It's God, baby, it's God. Some of you should have lost your mind a long time ago with the trauma that you've experienced all of your life, with the bad relationships, with all of the abuse that you've taken place. You shoulda blew your brains out a long time ago, but, hallelujah, God was still that eagle stirring in the nest, praise the Lord. And I said before if anything good has ever happened in your life, that was God, because all good and perfect gifts come from the Father. And if you've ever seen any good, that was God. You didn't deserve it, you didn't earn it, but God will never leave you nor forsake you.

"Well, God ain't gonna go with me to the bar while I'm drunk". Who do you think it was that caused you to be safely in a place where you didn't kill yourself? God shows up in every stupid place that you go to. When you show up at the motel to commit adultery on your wife, God is right there. He's the one that's talking you out of it. He's the one that's telling you to stop. He's the one that's... why? 'Cause he knows that there are consequences, and there is a devil loose that's trying to kill, steal, and destroy. So, if you are alive today you got to give God the glory and the praise because it's his goodness. He is why you are still here. He helps us in the midst of earthly turmoil, and we come out on the other side with a better understanding of his relentless love for us.

Look at Romans 8, verse 28 and 29. I gotta get you to see that you didn't do anything to earn the trouble. There are consequences. There are things that happen, but we gotta get out of this thing of saying that every bad thing that happens is something that you caused to happen. You know, you're becoming a part of the accuser of the brethren, that every time something bad happen you wanna blame yourself. I know how that feels. I used to do that. I used to blame myself for everything that didn't go right in your life. "Maybe I'm not teaching it right. Maybe I'm not praying hard enough for you. Maybe I need to fast more for you. Maybe I need to get the church roll and call all of your names out".

Now, I'm gonna reiterate that over and over again 'cause I don't think you just got what I said. Look at Romans chapter 8, verse 28. He says, "And", he says, "we know that all things work together for good to them that love God, to them who are the called according to his purpose. For whom he did foreknow, he also did predestinate to be conformed", conformed, "into the image of the Son, that he might be the firstborn amongst many brethrens". Now, I don't care what happens to you. If you'll hang in there and hang on to Jesus, God's gonna take the mess, mix it in with the clay, and it will become a part of the masterpiece. One day you're gonna be tempted to send all your critics thank-you notes, 'cause somehow it was their provoking you that caused you to stand more securely on what Jesus promised you.

So, when the devil show up you ought to say, "Boy, I been waiting on you, I was ready to work out. Where you at? I'm ready to work out, what's up"? You gotta quit being so scared, and we gotta quit beating people up, saying, "If you woulda prayed a little bit more then that would not have happened". I'm telling you some of that stuff gonna happen if you pray all day every day, because you got to develop from where you are to where God's called you to be. You might be mean now, but the things that happen in your life is gonna work that meanness out of you, and one day you're gonna display the character of the fruit of the Spirit. Somebody said, "Once a fool, always a fool". Not when you're a Christian. God will work the fool outta you, and I believe he working in you right now.

Turn to two people and tell 'em, "God's working in you right now. God's working in you right now". You ain't gonna never be just the same. You're being transfigured right now. Transformation is taking place right now. You're seated here minding your own business, listening to the Word of God, and God's changing your mind about some things. There are things that are changing right now. You're gonna be a better husband. You're gonna be a better wife. Your relationship is gonna get better. The only thing that can stop this thing is a bunch of excuses on your part. Wherever you find excuses you're gonna find failure. That's Wednesday's sermon, amen?

All Christians have been destined for that privilege, to display or to sweat the glory of Christ. You didn't get that. Every Christian has been predestined to display or sweat the glory of Christ, whether on this Earth or in the world to come. I don't wanna use "glory" so you can make it religious, but every Christian has been predestined to display the manifestations of the promises of God. Everybody. When people bump into a Christian, they're gonna experience the sweat of his glory. I prophesy to you right now that God is about to use you as a display, just like they do in the clothing store. They put them little things in the window to display the clothes. You're about to be used. You're preparing to be used as a display of his glory. When they look at you they're gonna be able to see the glory of God. When they look at you, those who are hopeless are gonna have hope. When they look at you, what they didn't understand they'll be able to understand it through you.