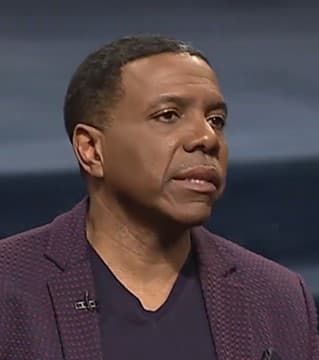 You follow what I'm saying? You don't do anything that Jesus has already done. He's already healed, delivered, made you righteous. He's already provided everything that pertains to life and godliness, so we're not, you know, heaven is not requiring you to do something to try to get something to happen that Jesus has already provided, so what we're talking about is, well, how do you respond to what's already been done? The Bible says that everything that Jesus has done then by faith we receive it. But what does that look like as far as practicality is concerned? If I tell you healing has already been made available, what do you do? Just kinda sit there and just hope it hits you? There is something that we need to understand as Christians, and that is grace requires a response. And what does that look like?

If you dare to bring that up and say that while your mind is being attacked with, "God's not pleased. God's mad at you. You missed it. You're on your way to hell", I'm telling you if you'll bring it up, "God loves me, and I know it". Say that one. "God loves me, and I know it". So, that's the first step, that I respond in faith to Jesus Christ by first of all saying, "I believe that he loves me", because you're not gonna have faith in what he has done and you're not gonna have faith in what he has provided if you don't have faith in the love that he has for you. And it's not so much how much you love God as it is how much you believe he loves you, so we spend so much time, "Oh, I love God. Don't you love God? What's wrong with you"? It's more having faith in the love that God has for you. Faith now worketh by how much you believe God loves you, amen? So, we talked about that.

I wanna show you one little quick Scripture to go with this. Hebrews chapter 9:28 in the New Living Translation. Your sins have been taken care of. It's done. You need to check that off the list. My sins have been taken care of. Put it on the big screen. Look at what he says here. "So also Christ died once for all time as a sacrifice to take away the sins of many people. He will come again, not to deal with our sins, but to bring salvation to all who eagerly waiting for him". So, why won't he come again dealing with our sins? 'Cause he's already dealt with them. Check it off your list. Check it off your list. Your sins have been paid for.

So, you are a son, a daughter of God with the same, your born-again spirit is brand new. That born-again spirit has the same DNA that God has. You're not trying to become sons and daughters of God. You have already been made sons and daughters of God through the price that has been paid, that redeemed you. You are right now a son and a daughter of God, amen? Boy, that's good news. That's good news, amen?

Now, this morning may be the most radical thing I've talked about. Here is the third thing you need to check off your list. In other words, you don't need to be caught trying to deal with this. It's been finished, and you believe in the finished works of Jesus. That's how you respond in faith. I believe in the finished works of Jesus, and so this morning for a moment I'm gonna talk to you about deliverance from judgment. Now, I'm specifically talking about being delivered from those consequences and being delivered from the curse pronounced on you when you don't do something that it says.

All right, and then, I'm gonna balance it out. I'm gonna deal with your behavior, 'cause a lotta people are using grace as an excuse not to change. And deception comes in, because what happens you hear the message of grace, you say, "Well, praise God I'm free", and then you just absolutely don't pay attention to the addictive behavior that you've developed all your life, and you say, well, grace covers you. I gotta make a little, slight change. While I understand what you're saying, that grace covers you, here is the thing that grace does: grace changes you. Grace changes you. And if the only thing grace does for you is cover you, grace covers your sin so you feel a lot more comfortable about doing what you do because you, it's like you are covered. No, that's the law. No, grace changes.

It changes you, and so I'm gonna challenge you today that if you have become comfortable in your bad behavior, and you say you're under the grace of God, the Scripture says you need to examine yourself to see if your faith in Jesus is genuine. Oh, mighty quiet in this church of God in Christ this morning. I've been in Baptist churches all week, so I'm almost saying y'all need to talk to me this morning. All right, so let's go through this, because I wanna show you, you no longer have to be afraid. You no longer have to be afraid of being judged like the world. You're Christians, and you're not gonna be judged like the world.

People in our society, especially in this country, we are so comfortable with certain societal acceptance of sin. We have. What we do is say everybody is doing it. You know, a date used to be where I go out and enjoy your company. That's not what it means now. Dating means we go out and eventually we have sex, and you know it, so you got to give it up 'cause we got to try it out, because there is even a fear that's come into some people's lives, afraid to marry you without having sex with you first to see what they got.

Somebody said, "Make it plain, Preacher". There are a lotta things that, you know, the norms and values of this society are now shaping your thinking, and you're thinking it's okay because the norm of today says certain things okay, and yet the Bible has not changed. And we keep trying to change the Bible with the norms and values of the world. Y'all ain't gonna like me here this morning. Yeah, you do. I love you whether or not, I just feel like I have to be responsible to not let you take the revelation of grace and pervert it, and I keep seeing that.

I keep seeing and I keep hearing people. While what they're saying is right, all things are lawful, but not all things are beneficial to you. And while vertically Jesus still loves you, horizontally you might get shot. People got bold. They're messing with folks' wives and husband, and God will still love you, but you may die under the emotional hurt and betrayal of that person that you're cheating with. Gotten real comfortable. "Yeah, I'm messing with your man. What you gonna do about it"? "Oh no, she didn't". Reality shows are putting things, so, the norms and values of society, and it's coming on the inside of you, and you're kinda okay with it, and then you're now using grace as an excuse. Use grace as an excuse, and you use God's love for you as an excuse.

"Wait a minute. I thought y'all said this was a grace church". It is, but not one of them funny-looking, freaky kinda grace churches, because it's either one way or another. Either you believe the grace of Jesus and you see the fruit of it, or you don't see the fruit of it because you don't believe like you say. Ain't nothing wrong with grace. It will do what it do, so if it ain't doing what it do the only place you gotta examine is, all right, so do you really believe it's like you say? Glory to God. This thing is so anointed the Falcons may win today. Boy, what you talking about? Leave my Falcons alone. I'm a fan. I'm a fan. I'm a fan.

All right, Romans 2. Romans 2:12. Now, look at this very carefully. 2:12 and 13. "Now, when the Gentiles sin, they will be destroyed", Wow. Imagine if that was true today. I want you to appreciate what I'm getting ready to show you about this grace of God. He said, "When the Gentiles sin, they will be destroyed, even though they never had God's written law", so he's talking about the Gentiles who didn't have the Law of Moses but they had moral law. He says, "And the Jews, who do have God's law", and his moral law, "will be judged by that law when they fail to obey it".

Well, you know, there are some churches in today's society that still preach that, but we're not under the law. We're under what? Say out loud, "I am under the grace of God". Now look at Galatians chapter 3:13 in the NLT. So, what happened? How do we get from this where we're judged for sinning to, you know, our faith in Jesus Christ and not obeying the law? Well, look what he says in Galatians 3:13. He says, "But Christ has rescued us from the curse pronounced by the law".

So, people that die and go to hell die in ignorance that a price had already been paid, that they didn't have to do that. So, they kept rejecting Jesus. They kept rejecting Jesus. You go to hell because you reject Jesus. You go to hell because you reject what he did, but Jesus took upon himself the curse for all of our wrongdoing. "For it is written in the Scriptures, 'Cursed is everyone who hangs on the tree", or who hung on the tree. And the rest of that says in the next verse that the blessing of Abraham might come on the Gentiles through Jesus Christ.

Now let's get back to this judgment. The church over the years, because of its inadequate ability to rightly divide the word of truth, has kinda led us astray even in our reading of Scripture. Let me show you one of these. John chapter 12, verse 31 and 32. And some of that religion was designed to hide what Jesus did for us. Some of it was designed to, I don't know, keep us in that old sin-conscious mentality and fear that God's gonna punish me, and God's gonna get me because I did wrong and I sinned, all right?

How many have heard that Scripture before? All right. Now, I wanna interpret this Scripture the way that it has been taught. The interpretation of how this has been taught says, "And if I be lifted up". If Jesus is lifted up from the earth, then he's gonna draw all men unto you. In other words, all men are gonna be drawn to Jesus because he was lifted up on the cross. Is that what you got? Come on. Talk to me now. All right, so here is what it's talking about. Now, I'm gonna strike men out. I can do that. Somebody say, "He taking from the Bible". No, that's why they put it in italicize, to indicate it wasn't in the original language and text, so I'm gonna take it to the original language and text before they added this thinking they knew what it was talking about. "And I, if I be lifted up from the earth, will draw all unto me".