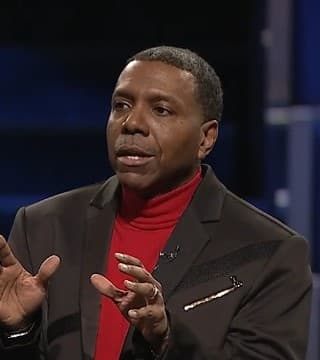 Good morning and Merry Christmas, everybody. There is nothing like when the spiritual family comes together in honor of Jesus Christ. And if you ever wanted to know what a real church looks like, look around. Look around. We could have all remained in our circle and I'm not throwing any shade at people who are not here, but what I am saying is that there's something supernatural that is released when he is made priority. He's not asking for a whole lot of time, but when you just put him first, the Bible says seek ye first Jesus, the kingdom of God, Jesus, the kingdom of God and all these things you need, seek his kingdom, remind yourself you're righteous, and all these things you need will be added unto you.

Today is not a day where you're going to be stressed out over what you need and what you don't have. Today is going to be a day where we're going to focus on Jesus and the fact that we are righteous, and all these things will be added unto you. Come on, let's give the Lord a big hand clap of praise. Hallelujah. Amen. In honor of him, let's receive our communion this morning. We honor Jesus Christ as we celebrate his birthday today. But, you know, we also want to thank God that Bishop Ken Fuller was born the same day Jesus was. Would you please give Bishop Fuller Happy Birthday? God bless you.

Father, thank you for this enough opportunity to minister to these, your precious sheep. Thank you, Lord, that we are gathered here today in honor of you, Jesus. We saw fit that it was important enough for us to do something to say we recognize what this day is all about, and we will not allow the world and all that they think to rob us of our celebration of you. Bless us today. It's my prayer. In Jesus's name we pray, and everybody said amen.

Matthew chapter 1, verse 21. I just want to share real quickly ten reasons why Jesus was born. Now, this title may change. It might be five reasons why he was born, but I want you to understand that this goes so much farther than the tradition that the world has created. It's so much bigger than, you know, the traditions even we've set up in our lives, and people have the different beliefs. But I think about the number of millions of people around the world who are celebrating this day and they don't even believe in Jesus. Think of that. It's been reduced down to the traditions that they have made, and the Bible says, "Your traditions have made the Word of God of no effect". So real quickly I want you to take a list of the reasons why Jesus was born.

Number one, to save us from our sins. Matthew 1:21 he says, "And she shall bring forth a son. Thou shalt call his name Jesus, for he shall save his people from their sins". So if Jesus was never born again, think of it. We would not have the salvation from our sins. If you look in the book of John chapter 1 and verse 29, it's not that he just, you know, made salvation available to people who are at church today, but he's made salvation available to the whole world. Think of this. If a person were to die and go to hell, they will only discover that salvation was available to them. All they had to do was sign for the package.

Look at St. John chapter 1 and verse 29. And in St. John chapter 1, verse 29 he says, "The next day John seeth Jesus cometh unto him and saith, 'Behold, the Lamb of God, which taketh away the sin of the whole world.'" So Jesus has taken away your sins, past, present, and future, which simply means if you'll just invite him into your life, you have accomplished everything necessary in order to get to heaven. You don't go to heaven because you're good. You go to heaven because you believe in Jesus. Amen?

And so Jesus showed up to redeem, to pay the price, the ransom so that we can be free from the law and be adopted as sons and daughters of God. Had he not been born, that would not have been possible. Galatians 4 and 5 says that he came to redeem them that were under the law that we might receive the adoption of sons. If you're a woman, say, "I'm a daughter". If you are a man, say, "I'm a son". Go. Say it.

Number four, the fourth reason that Jesus was born, to be a mediator of a better covenant. Hebrews chapter 8 and 6. So we couldn't keep the covenant of the law. So another reason Jesus was born is to mediate a brand new agreement, to be the mediator of a brand new covenant, one that we could keep and one that would make us extremely successful. Hebrews 8 and 6 says, "But now hath he obtained a more excellent ministry, by how much also he is the mediator of a better covenant". Somebody shout, "Better". "Which was established upon better promises".

So you're no longer under the covenant of the law, something that you can't keep and if you break just one of them you're guilty of the whole thing. Jesus says, "I'll do that covenant and I'm going to give you a better covenant that you can do and you got better promises". I praise God today that I celebrate a Jesus who loved me enough to be born so that I can live under a better covenant. Amen?

Number five, Jesus was born so that he could bring to us, oh thank God, grace and truth. St. John chapter 1:17, "Jesus came. He was born so he could bring to us grace and truth". Now most people think, "Well, he gave us grace and then he turned around and gave us truth". No, they're the same. One side of the and is in connection with the other side of the and. Grace is the truth that makes men free. It's not grace and truth. Grace is the truth that makes men free. What is grace? It's unmerited, undeserved favor of God. It's you getting from God even when you didn't deserve it. It is not God doing something because you've been good. It is God doing something because he is good.

And today as we celebrate the birth of Jesus Christ, we celebrate a Jesus who is a good God, and the Bible says his goodness will cause a man to change his mind. His goodness will cause a man to repent. I know it's not New Year's, but get ready. 2019 while the world is going through one thing, you're going to be walking in the unmerited, undeserved goodness and favor of the Lord. Somebody shout about that right quick. Amen?

Number six, number six, the sixth reason why Jesus was born, to pay the peace offering or the payment of our sin. Somebody had to pay it. This was expensive, and nobody could afford to pay the ransom where your sin was concerned. In fact, if you look at 1 John 2 and 2, Jesus was the peace offering. Had he not been born, there would not been a payment. Not even hell was enough to pay off that debt. There was a sin debt, and Jesus was born to pay that sin debt. The Bible says in 1 John 2 and 2, "And he is the propitiation for our sins; and not for ours only, but also for the sins of the whole world".

Here's the good news. You can never defeat a born-again Christian. We've been called to live in faith and we've been called to die in faith. But please I want you to understand, just because somebody died physically doesn't mean they lost the battle. They just transitioned on into eternal life where there is no time. Right now we have time. But praise God when you got born again, you stepped out of time into eternity. And if it were not for the birth of Jesus, you wouldn't have that opportunity.

Bible says in John 3:16, "For God so loved the world that he gave his only begotten Son that whosoever believeth in him", say out loud, "I believe in Jesus", "Should not perish, but have everlasting life". Don't you let somebody convince you that you're going to perish because you missed the mark or you missed that mark. Jesus is taking care of all of that, and the Holy Ghost is working on the inside of you and the things you used to do you ain't going to want to do no more.

Some of you are going to find out in 2019 the stuff that you just did all the time with addicted behavior, Jesus is going to snatch it away and he's getting ready to give you a new desire to do new things. Praise God. And you got to tremble and shake wondering if he's going to do it once again. Because you have the Holy Ghost working on the inside of you. Because when Jesus showed up...

Number eight, number eight, the reason why Jesus was born, no more condemnation, but salvation is now available through him. I said no more condemnation. Turn to two people and say, "No more condemnation". St. John 3:17 and 18. You know what it means? Condemnation deals with the issue of not enough. And I'm telling you right now, no longer will you have to deal with not enough. Listen to me carefully. Condemnation, like we condemn a building. The building has been declared that it's not fit to be used. It's not fit to be lived in. And I am telling you, I don't care what's going on in your life. Don't you dare hear the words of the devil to tell you that you're unfit.

If you were to go to God, say, "God, remember what I did last week"? He would say, "Wait, wait. We don't have this on record". Why? Because he took your sins and he cast them as far as the east is in the west. And then when it finally landed, it landed in the sea of forgetfulness where he remembers it no more.

I don't know what you're looking at. But when system start failing, when finances start failing, when things start falling, it shall not come near you. They didn't have enough straw to make brick in Egypt, but they had more than enough in Goshen. Ladies and gentlemen, welcome to Goshen. Verse 32 says this: "Jesus hath God raised up". Why? "Whereof we all are witnesses". Thirty-three, he says, "Therefore being by the right hand of God exalted and having received of the Father the promise of the Holy Ghost, he has shed forth this, which you now see and hear". You're getting ready to see some stuff...

Look at these last three Scriptures with me. Galatians, 3:14 and 16 says, "That the blessing of Abraham might come on the Gentiles through Jesus Christ that we might receive the promise of the Spirit through faith". Fifteen, he says, "Brethren, I speak after the manner of men. Though it be a man's covenant yet if it be confirmed, no man disannulleth or addeth thereto". Sixteen, he says, "Now to Abraham and his seed were the promises made. He saith not, and to seeds as of many, but as of one. And to thy seed", come on, "which is Christ". Jesus was born to be the promised seed. Ladies and gentlemen, you better be glad that today we celebrate the birthday of a Savior.