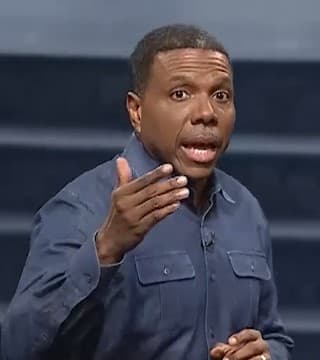 I decided I'm going to preach every time I take the pulpit like Jesus is coming back in an hour. And he gave me one hour to convince as many people as I can. I don't expect everybody to believe this, I'm here to preach that I might win some. And then next Sunday win some more. And the next Sunday win some more. Verse 30, now I'm gonna look at this in the King James and then the Amplified. He says, "But of him are you in Christ Jesus". One verse says, "By his doings you are in Christ". "But of him are you in Christ Jesus".

And so, I'm holy "rat" now, R-A-T, quick little rat. I'm holy "rat" now. You're not gonna be holy when you start wearing dresses only. You're not holy when you pull your wig and weave off and no longer wear make up. That is a situation if you do that, praise the Lord. I'll tell you what is holy. Wigs, and weaves, and makeup, and eyeliner. All that stuff is holy, praise the Lord. It's holy. Whatever makes you look better, that's a holy thing. But none of that stuff has anything to do with your holiness.

Most of the church didn't even know what holiness is about. They stopped at the part of talkin' about separation and sanctification. Holiness is being uncommon with the world. When they are sick, you are healed. When they are sad, you're full of joy. When they are broke, busted, and disgusted, God has provisions and taking care of things in your life. It's standing opposite to the world. You're separated or sanctified from that. And he says you're like that now, but you're never going to see the manifestation of holiness until you receive that I believe I'm holy now. You're not gonna start doin' right until you believe you're righteous now. You're not gonna believe you're delivered from hell, sin, and sickness, and disease, and poverty until you believe that the ransom has been paid.

This is not an issue of your performance, it's an issue of your believing. Jesus can take care of your performance. Do you not understand if a man stood up on a mountain trying his best to curse Israel, and every time he opened his mouth, it showed up as a blessing. He tried to curse 'em, "Y'all, you're blessed". Who do you think you are that God cannot handle your behavior? He can the day you believe him.

Do you know, nothing will change on the outside until something's changed on the inside. What's got to change on the inside is your identity. You gotta believe that you are who he says you are. If he made you righteous, you say, "I believe I'm righteous", and you're righteous. If he gave you redemption, "I'm redeemed". What happens? What happens the day you believe that? The Holy Spirit starts working in you and he starts giving you new desires. He starts taking away your old want to's and start giving you a new want to's. And once you have the new want to's, you ain't gonna want to do what you've been doing because the Holy Spirit is working in you. He is working in you.

See, you've let the world minimize your belief because they're tryin' to tell you nothin' is really real unless you see the fruit of it first. The fruit doesn't come first. The fruit ain't never first. The fruit is the result of the root. You gotta get the right root before you get the fruit. The world wants to... If you've got a fruit problem, it's 'cause you've got a root problem. Fix the pipes and the water will flow right. Every religion in the world requires that you do something.

That's all they knew at the time. Revelation should get stronger and deeper every generation. The Lord told Taffi and I, he said to us, "You're no longer just preaching to your generation, so don't get upset when your generation have a hard time receiving it. You are now preaching to the generation that is on its way, because I am not gonna leave them or forsake them". And so, I'm cool with that, but I'm gonna tell you something. My generation and the generation ahead, you better catch this. You better catch it, 'cause things are about to change. Are you kidding me?

You know, the Bible says we know when the end comes. He says it's gonna be just like a woman getting ready to have a baby. And you know those birth pains, and then you who have had kids, your water breaks, right? And when the water breaks, contractions, and they stay far apart, and the closer the baby gets to coming... you think I would know this, right? The closer... 'cause I was praying in tongues when Taffi had our first baby. I was praying in tongues.

Call somebody. You're having more tornadoes worldwide than he's ever seen, more hurricanes than you've ever seen. There's a great travailing. There's a great intensity. The contractions are increasing more, and more, and more. What's happening? A baby is about to be born. Y'all better get ready. Y'all better get ready. You've better not listen to some of this ol' crazy stuff, talkin' about, "Ain't no such thing as no Bible. Ain't no such thing as no God and all that". You better don't listen to a fool. They'll lead you to hell. Don't follow fool. You'll fall in the ditch right behind him. They don't know they talkin' about. They've been confused because they hadn't been taught right and my heart goes out to them. And they're upset because they came up under the law, living under the flesh, people telling them God's mad at you. God ain't even in a bad mood where you're concerned right now today, but we didn't know no better.

Now we do, and now it's time to make the change. All right, let's get started, Romans 4:1-6. There's some people, they come when I'm speaking around the place. And I tell you, overseas, man, I thought they wouldn't get it. They got it. They gettin' it. There's one big university overseas. I'm not gonna tell you the country or anything, but they have three rules. Don't listen to Creflo Dollar, Andrew Womack, and Joseph Prince. And I said, "Well, whoopty whoop". And the more they try to stop it, the more their younger generations are logging on, and listening, and going through to it more, and more, and more. You can't stop it because this is a revelation of Jesus.

Now watch this. "What shall we say then that Abraham our father, as pertaining to the flesh, has found"? Now, the question is, you know, has he found anything pertaining to the flesh? All right, now watch verse 2. "For if Abraham were justified by works". There it is. So, he's justified by works. "He hath whereof to glory," he says, "but not before God". If he got justified because of his performance, he can't give the glory to God for that. He's got to give the glory to his works. Alright, look at the next verse. But he says, "All right, so what saith the Scripture"? I like this.

To impute means to charge to your account, to lay to your account. He says God charged and laid to their account righteousness without them having to perform to get it. They believed and it was counted unto them for righteousness' sake. Now, I know, I mean, 'cause we're talkin' about you don't have to perform to get these things, and then, you know, I'm gonna talk to you next week about your authority, but now let's look at some Scriptures here. Look at Philippians 3:9. I have screamed it. I have passionately put it out before you. And now I'm going to calm down and we're gonna read, all right?

There's no enmity between you and God. We have peace with God. Why? Because of what Jesus Christ our Lord has done for us. Mmm, verse 2, "Because of our faith, Christ has brought us into this place of deserved privilege where we now stand, and we confidently and joyfully look forward to sharing God's glory". Hold verse 2 right there now. Go back to verse 1. Look at it again. "Therefore, since we've been made right in God's sight by faith".

"Well, it sounds to me like you tryin' to justify sin". Well, it sounds to me like you don't understand this, because there's no way you're gonna be interested in sinning when you allow and believe Jesus Christ. To believe him is to allow him now to infiltrate your insides, hallelujah. Once you believe him, he goes to work at changing your your old want to's. So, whoever you was sleeping with, you better tell them bye, because the desire is about to leak out. You ain't gonna want Herman like you used to want him, honey. Herman just ain't got it no more because a man by the name of Jesus has moved in and he's more appealing to you than Herman could ever be. You assume you're gonna want to do what you used to do now that you believe Jesus. That's not gonna happen.

All right, we in College Park right now. And now that I believe I stand in that place of undeserved privilege, then I confidently and joyfully look forward to sharing God's glory. You know what's been robbing your confidence? Your behavior. Your behavior'll rob your confidence. When you misbehave, you don't believe you righteous no more. That robs your confidence. Some preacher tell you, you know, God don't like ugly, and he don't, but he ain't lookin' at you through your ugly. He's looking at you through Jesus. And as long as the sacrifice is okay, you okay.