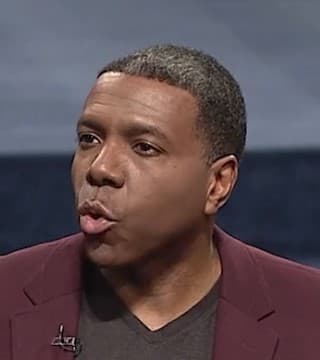 I wanna begin this morning in the book of Colossians chapter 2 and verse 8. I'd like to read it out of the out of the King James The New Living Translation and The Message. The New Living Translation and The Message Bible. I want to start off with this because I believe that the church is under attack by religious people, who have been hurt and there's this thing goin' on just tryin' to convince people why they ought not go to church, why they ought not participate in church, why they ought not have nothing do with church. And they come up with all these things.

But I also know that this is a very vital time for the World Changers nation, especially where an understanding of the Word is concerned because what I am seeing what Taffi and I are seeing, is deception being promoted through pulpits of immature leaders, who don't know how to rightly divide the word of truth. What I'm seeing is through the pulpits of America and the world, leaders, who do not understand what real truth is, they are blind and they're leading the blind and they're taking knowledge from one generation and passing it down to another generations and demons are a part of that knowledge.

And so, I'm standing up boldly today to say some things and we can't hardly hear the truth, because we're stuck on bad, undivided or wrongly divided word. And so people pick the Bible read a Scripture and I don't even mean nothing that they think it means 'cause they don't know how to rightly divided it. What was true under the old covenant is no longer true under the new covenant and if you don't know that you'll preach somethin' and say the Bible says this and it's supposed to be true 'cause you got it out of the Bible, but you don't know how to rightly divide it, you have to understand that that was true in the old covenant.

Servitude and dominating women, was true under the old covenant. It is no longer true under the new one, but what do you do when you're famous preachers get in the pulpit and still teach the same doctrine as if it's the truth because they won't tell you that the Bible has to be rightly divided. Do you know in the old covenant if your children, if your teenagers rebelled against you and you corrected them and they did it again you were as a parent responsible for stoning them.

Isn't it amazing how you don't believe that part of the old covenant, but then you believe this other part of the covenant that says that God will not share his glory with anyone or any idols and people preach that today and all over the New Testament. It talks about his desire to share his glory with his people. What the Bible contradicts itself? No it doesn't. It doesn't contradict itself at all if you know how to rightly divide it you will understand that what was true under the old contract, that was only supposed to last the Bible says that the law and the prophets, which the lasting until John the Baptist and then it's over and I cannot for the life of me understand why I can read the same Bible as another preacher and he can't see it.

And my wife, finally says somethin' and I can take. After these last 10 years. She said "I don't think we've been called to preach to that generation". She said, "Maybe we've been called to preach to our generation and a one right behind us because the one ahead of us don't seem to pay attention to a word we tryin' to show 'em". And we sat down to encourage one another keep on preaching don't let it go put your foot on the pedal keep on pushing it down, just keep on going with it, just keep on going with it.

So, I'm rejuvenated, where this is concerned and so I'd like to start off with this Scripture. I'm going to preach my sermon I think today. Read it with me. "Beware lest any man spoil you through philosophy and vain deceit after through tradition of men. After the rudiments of the world and not after Christ". So we're getting things that are coming from from other areas, but not from Christ. You're still tryin' to live by the rules of the Ten Commandments and you don't even recognize that Jesus is the manifestation of all of those rules.

See him, now look at the next version here I think it's in NLT. Colossians 2:8 in The New Living Translation. "Don't let anyone capture you with empty philosophies and high sounding nonsense that come from human thinking and from the spiritual powers of this world rather than stuff that comes from Christ". Last one, Message Bible. "Watch out for people, who try to dazzle, you with big words, and intellectual double talk they want to drag you off into endless arguments that never amount to anything they spread their ideas through the empty traditions of human beings and the empty superstitions of spirit beings. But that's not the way of Christ".

Ladies and gentlemen, it's time for us to learn the way of Christ under this new covenant, it's about the way of Christ and this is gonna be an amazing, amazing summer for us. There's some things that are gonna change in your life, there's gonna be a switcharoo. Somebody said, "Define that". What's been dominating you, you will begin to dominate it. Now watch this. Nothing happens without faith. I can give a word from the Lord and as straight from heaven and you don't receive it in faith, and you don't see nothin' I say. You have to release your faith right now and say I will not be dominated by anything or anybody.

I'm telling you God is about to rise up strong in every one of your situation, hallelujah. And I'm prophesying this I am ministering this word into you. I am putting these words on the inside of you. I need you to expect something good to happen in your life. Ha ha ha, hey, the God of the turnaround lives in my house hallelujah. Hallelujah, stuff, you've been tryin' to figure out and you hadn't been able to figure it out right now. The wisdom of God is about to explode on the inside of you and the God of the turnaround lives in your house.

See, this, this narrative. This wicked narrative that's in the world right now, it's after your faith. "I never heard that before. I didn't need that before". He after your faith. He's working in your emotions tryin' to make you think and it ain't nothin' right no more. You're focusing on the wrong thing. The God of the turnaround lives in your house. I'm not preaching on a sermon right now. I'm not what I'm talkin' about you got to catch it. You can't take no notes on this you got to catch this you can write down what I say over and over again, you got to catch. Certain things prophetically, you gotta catch.

When you start going around feeling so sorry for yourself that you put yourself in the center of the circle and can't be used by "God" for nobody else 'cause you're so focused on you? Oh, he's still alive and he still has a wonderful plan and it shall surely come to pass. So stir yourself up. What's the Bible say? We gotta be careful not to let certain things slip. That's all that's happened. You let some stuff slip and the spirit of God, just tryin' to remind you, "I'm still here. I'm the God that never changes. I'm to God and I change not," amen. I'm stirred up, I don't even know... what, huh?