Creflo Dollar - From Condemnation to Grace 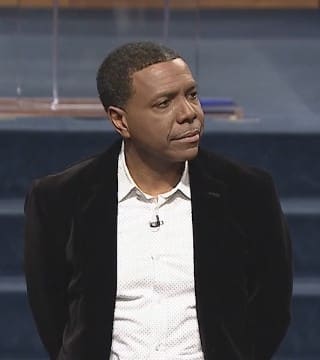 All right, now watch this. So, there are two statements that we get out of this. And here's the first one. This is the statement, God is saying, "I declare how things turn out long before they ever happen". Now, don't miss the word "declare". He says, "I declare how things are going to turn out long before they happen". That's the first statement we get. The second one, "I declare not just natural events, but human events. I declare doings. I declare things that are not yet done". Why? 'Cause I'm the unique God that can't be compared to nothing. Oh boy.

All right, now hang in here with me a moment. I wanted to make sure I could go through that because if I didn't write this down, I'd be all day talking about it, so just follow me now. This is where you're going to be tempted to nod. Just follow me now. Now, let me ask you a question. So far, to me, does this sound like foreknowledge? Foreknowledge is God having knowledge about a thing before it happens. I agree with you, this sounds like foreknowledge. Watch carefully now. But the next half of verse 10 tells us how he foreknows the end, and how he foreknows the things not yet done. That's strong.

So, when God declares the end long before it happens, what he says is, "My counsel shall stand". And when God declares things that are not yet done long before they are done, what he says is, "I will accomplish all my purpose". Which means, one more, which means that the reason God knows the future is because he plans the future and then accomplishes it. The future is the counsel of God being established. The future is the purpose of God being accomplished by God. So, he says it and then he does it. He ain't never said nothing that wasn't accomplished 'cause the unique God has the ability that when he says a thing, he knows the end of it. It's his nature.

When I say something, it appears. You might see a goat, but if God shows up and say dog, that goat will immediately begin to transform into what he said. Because that's a part of his nature, saying something ahead of time, knowing that his words have an accomplished end that will appear. Mm, I started to tell you to turn to your neighbor and say, "Shut up". All right, now then the next verse. The next verse, "Calling a ravenous bird from the east, the man that executeth my counsel from a far country; yea, I have spoken it. I will also bring it to pass. I have purposed it, I will also do it".

So, there's something about a human that can locate what he said that will allow the human to enter into a rest, not having to try to figure out how to help God bring that to pass like Abraham and the girl. No, the other girl, Hagar. Yes, Sarah too, she was talking about helping him out. Nuh uh, once you find where God said it, all you need to do is learn how to rest 'cause he can't say nothing that won't appear. Y'all don't hear me. Y'all don't hear me. In other words, the reason he says, "My predictions come true is because they are my purposes, and because I myself perfect them".

Now, let's bring man into this. Go to Deuteronomy chapter 30. Deuteronomy chapter 30, verse 19. Now, we're going to start answering some of those questions. But you got to understand who God is. And I'm going to show you how we've messed it up. Read verse 19 out loud together with me. Ready, read, "I call heaven and earth to record this day against you, that I have set before you life and death, blessing and cursing; therefore choose life, that both thou and thy seed may live".

In other words, now whatever happens is what you choose. You choose it. And your whole life is in your hands now. In the Garden of Eden, God made a man with a free will. His job is always lay out what the choices are. Did you see in verse 19? He says, "I place before you a blessing and a curse. I place before you life and death". And here's what God does, he tries to give you a hint, but he can't do it. He said, "Therefore, choose life. Therefore, I put before you life and death, blessing and cursing. And if you too dumb to know what to choose, let me give you a hint. Choose life".

So, we go to Adam and Eve, and you think, well, you know, if God knew that they were going to do that, how come he couldn't stop them? There's a big reason why he couldn't stop them. First of all, if God would have made the choice that they were supposed to make, all of creation would have ceased to be. Prove it, Hebrews chapter 1:3. Turn there real quick and we'll come back to Deuteronomy 30. Hebrews 1:3. If God would have interfered with Adam and Eve's choice, and just the same today if he would have interfered in your or my choice, things would cease to be. All creation would be affected by that. Satan would be able to turn God's lights off and run the earth like he wanted.

Verse 3, "Who being the brightness of his glory, and the express image of his person, and upholding all things by the word," did you see that? Upholding all things how? How are all things being upheld? By the what? By the what? If the integrity of his word is ever something that falters, all creation is gonna be affected by it. So, if you make a decision to go to hell, do you know God has to protect your right, and he has to protect your free will, and he's got to protect your decision to go? And he will escort you all the way to hell and open the gate. Because it's one thing he will not back up on, he made you with a free will. Are you following me?

Now, so man is a free moral agent. Man makes decisions. He's the one that decides. He's the one that chooses. "I just don't understand, why would God let that happen"? No, no, no, no, no, here's what you need to understand. He didn't let nothing happen. The truth of the matter is you might be the one that's letting it happen because of your choices. Now, think with me about your life. Everybody think about their life. In every issue of your life, there is always a choice. And then sometimes God tries to come in and he even says it, "Don't go down that path. Don't go down that way. Look at this, don't go down that way".

Go to Romans chapter 8. Let me show you something right quick, Romans chapter 8, verse 5 and 6. God loves us so much, he's like, "My assignment is to do everything I can to enlighten the path, to show you the path, to tell you the path". The whole earth operates like this. There is a way that leads to life, and there is a way that leads to death. And he says it's already set, it's already set. It's waiting on your decision. It's waiting on your choice. If you broke as the Ten Commandments that Moses dropped on the bottom of Mount Sinai, I guarantee you you took the path there.

So, without saying it, what is God saying? Choose. I'm telling you the consequences of both pathways. To be carnally minded, literally means of the five senses. It means I gave you the ability to see and to smell to help you to enjoy this life, but I never intended for you to allow what you see and what you smell to govern your life so that every time you see something, you're being led by what you see, and you're ignoring what I said. To be carnally minded is death.

What's the result of becoming spiritual minded? It'll take you to, come on, life and what? And peace. But don't nobody want to get in the Word. See, that's the key. See, you've been convinced that the Word is a waste of time. And the Word is Spirit. It is what gives you a spiritual mind, but don't nobody want to read the Word no more. You're searching for churches that want to inspire you, but won't give you no Word.

So, while you're inspired, you're still carnal. 'Cause you don't know what the Word says, you don't know how it says, you don't know how to apply it in your own life, so you're not spiritual minded. You are now looking at how everybody else does it and following the crowd. 'Cause don't nobody want the Bible no more. "Come on, we going to go to Creflo's church this morning". "I ain't going to Creflo's church. See, I feel like I'm in school. I want to go somewhere where I can hip and hop, and I ain't got time for all that". But I'm concerned about what happens when we dismiss church.

I want you to have a spiritual mind. I want you to have a mind that says when somebody hates you and somebody abuses you and somebody uses you, the spiritual mind says, "I'm going to love what's ugly because I know that when I apply the spiritual principle of love, it's going to take me down a path and give me life and peace". But no, you want to go down the only other road. It hurt your feelings. And I ain't never gonna do that. And I ain't never gonna give myself, and I'm gonna hate them forever. And all it's going to do is make you so bitter.