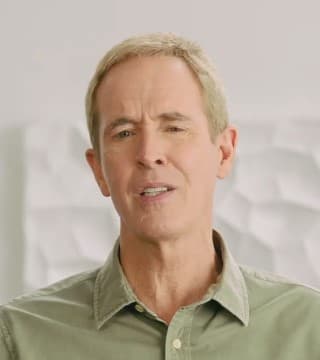 Welcome back to session two of "If Money Talked". We're asking the question: what would money say if money could talk, and we've discovered that what money would say actually matches what Jesus did say when he did talk about money. Now, if you remember in session one, I ask you what would you do, or what do you do with your spare money, your extra money, and then, I went about proving to you that you actually have spare money. Or you had it, anyway. Because all of our money is accounted for, right? We either spend it, or about to spend it, or we're paying off what we spent it on a long time ago. Or maybe we're saving it for a vacation or a rainy day, or retirement.

Now, of course, Jesus disagreed with this whole idea. In fact, He told us, and He didn't mince words, that life does not consist, life does not consist in an abundance of possessions. In other words, life is not about stuff. Life is not about what you have. Life is not a race for newer, nicer, upgraded, renovated. Life is so much more than that. And you know that. And your money, Jesus said, is just a tool. In fact, if money could talk, it would remind us: "I can add meaning to your life, but I'm not the meaning of your life".

Now, for some of us, the graph actually looks more like this, right? Our spending actually exceeds our income. In fact, sometimes it's because income drops, maybe we're laid off, or you decided to leave your job, or change careers. But often, it's because we spend and borrow until we're upside down. And the next thing you know, you don't just have a money problem, you have, well, you have all kinds of problems. You have a marriage problem. Every conversation is about money, right? How could you, or why did you, or didn't we already, or didn't we talk about that? Lots of folks with lots of stuff have lots of financial pressure.

You see, when your life is like this, you actually become a slave. You have purchased or borrowed your way into slavery. Visa, American Express, a student loan. They're actually your master. Now, they don't want to be your master. That's not why they're in business. They're in business to facilitate your happiness. To make things easier for you. To help you get through school, or maybe own a home. But when your personal finances look like this, they become your masters. And you know what? You hate 'em! Worse, you don't even know who them is to hate! And they don't know who you are either.

You know what, you're just an account number. If you don't believe me, call 'em. Tell them your name. And what's the next question they ask? "What's your account number"? You're a number. Not a name. And worse, you're a slave. You can't buy this, you can't drive that, you can't vacation here, your kids can't go to school there, right? I mean, who's running your life? People that you don't even know. Companies you don't even work for. The mortgage company, the credit union. You're a slave to a group of people you don't even know. And worst of all, you did this to yourself. It's why money would say, if our money could talk, it's why our money would warn us: "The moment you think you own me, the moment you think you get to do whatever you want to with me, I actually, I actually own you".

Now, luckily, Jesus addresses this, and spoiler alert: according to Jesus, we don't actually own our money. It's not actually ours, but we think it is, and of course we do. I mean, why wouldn't we? Think about the words we use. You earned it. You made it. You put in the hours, your name is on the paycheck, it was deposited into your account. So of course we think we own this stuff. To which our money and our stuff might reply, "Hey, but I'll still be here when you're gone". This is how we know we're not owners. We leave it all behind. We don't own it, we just manage it. And we only manage it for a little while. Which begs the question: Manage it for who? And Jesus answered that question for us in a parable.

Now, it's a parable that you might have heard before, and so try not to allow your mind to rush to the end. But here's a parable Jesus taught that really lays the foundation for where we're going in this session. Here's what he said. He said, "Again, it will be like a man going on a journey, who called his servants and he entrusted his wealth to them". Now, in a parable, there's always a God figure, and then there's always an us figure. Somebody in the parable represents the folks in Jesus' audience, and somebody in the parable represents God the Father.

And if you read this parable, if you read the whole parable in context, it becomes very clear that the wealthy man, the one who's going on a journey and entrusts his wealth to his servants, he represents God. And the servants to whom the wealth is entrusted, well, that's me. And that's you. He continues. "Again, it will be like a man who goes on a journey, who calls his servants to him, and he entrusted his wealth to them".

Now notice, he doesn't give them his wealth. This wasn't a loan. He just let them manage his money for him for a little while, while he was gone. And what percentage of the money did the servants own? Well, zero percent. What percentage did the master own? All of it. It was all his. And this is important. In fact, this is actually the point of the parable. Jesus continues, "To one he gave", you may remember this, "five bags of gold, to another he gave two bags of gold, and to another he gave one bag, each according to his ability. And then he, the master, left to go on his journey".

So essentially the master gets his guys together, he hands each of them a portion of his wealth, and he says, "While I'm gone, I expect you to do with my wealth what I would do with my wealth. I want you to manage it the way you think I would manage it, and when I return, you'll have an opportunity to report on how you did". Now, if you know this parable, you know what happens next. When he returns, he discovers that they all didn't manage his money the same way, right? Two of these three guys, they did really well. In fact, they doubled their master's money. One of them doesn't do quite so well. He buries it.

Jesus continues. "After a long time the master of those servants returned, and he settled accounts with them". And this is where the point of the parable becomes oh so clear. The servants didn't get to keep the money they'd been managing. They didn't get to keep the extra money they'd made on their master's money. It all went back to the master. Why? Because a hundred percent of it belonged to the master. And zero percent belonged to the servants. They were managers, they weren't owners.

And when we read this parable, there's a tendency to get all caught up in the unfairness. I mean, one guy got five, another guy got two, one only had one. In fact, some of you are kind of stuck there right now, right? You look around the world, you look around your community, you look at your friends, and you think, "It's just not fair, I work just as hard as he does. I work just as hard as she does. His salary's twice as big as mine. I mean, if I had that much money, if I had that opportunity"... But Jesus says, no, that's not the point. The point of this parable is simply this: It's not the amount of money that each of these servants was asked to manage. That was outside of their control. The issue wasn't how much they managed. It's what they did with what they were asked to manage.

So, how 'bout you? Do you feel responsible and accountable for how you are managing God's wealth. The wealth that he has entrusted to you. Or are you the kind of financial planner that God would have to fire? I mean, could you give an account of where your money's going? Where it's gone, or is it just gone? If all of this seems a bit overwhelming, no worries. We've got a couple more weeks to talk about it. And this week, we're gonna do something super specific to help you focus on this principle. We're going to spy on our money together. That's right, we're all gonna spy on our money, and we're not going to establish a budget. We're just gonna keep track of where we typically send it and spend it. In your workbook, there's actually a tool to help you do that all week long.

Knowing you can know is not the same as knowing, right? The fact that you have access to how much you've spent in different areas is different than sitting down and looking categorically at how much you've spent and where you spent it. So, this week, I want you to look. I want you to keep track. I want you to spy on your money. Because when it comes to money, we should never find ourselves saying, "Well, it seems to me", or, "I'm not really sure", or, "It seems like last time"... I mean, let's face it. A certain amount comes in. And then we send it places, right? A certain amount comes in, and then you, or you and your husband, you and your wife, you decide where it goes.